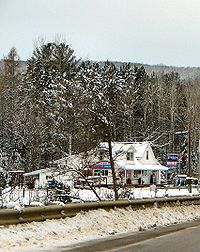 Greater Madawaska is an incorporated township in Renfrew County in eastern Ontario, Canada,[1] created on January 1, 2001, through the amalgamation of the Township of Bagot and Blythefielda; the Township of Brougham; and the Township of Griffith and Matawatchan.[3] It has a population of 2,290.

The ghost towns of Khartum and Balvenie are also located in the township.

Two fire towers were located in the township in the middle of the 20th century. These were located at Jameison's Mountain north of Griffith (the cupola now sits on the property of the Pembroke MNR office) and at Matawatchan. These were put out of use in 1970 as aerial forest fire fighting techniques took over.

The township is composed of the geographic townships of Bagot, Blythefield, Brougham, Griffith and Matawatchan. The town borders Calabogie Lake and the Madawaska River, and is located in the northern section of the Ottawa River Valley.

The Calabogie Peaks ski resort is located in the township. The Kingston and Pembroke Railway ran through the town, with stations at Ashdad and Calabogie, until it was abandoned in 1986. It has now become a hiking trail, the K&P Rail Trail.