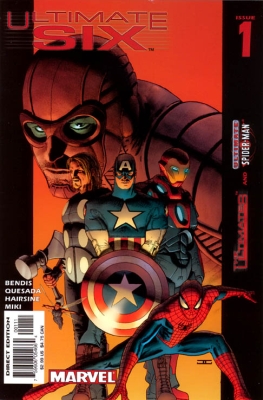 Ultimate Six is a seven-issue and crossover between and (), featuring the version of the . The series was written by , penciled by and inked by Danny Miki. Although originally intended to be just six issues,Fact|date=February 2007 it was expanded to seven. It was collected as "" Vol. 9 (ISBN 0-7851-1312-6).

Max Dillon, Flint Marko, Otto Octavius, multi-billionaire Norman Osborn, and Sergei Kravinoff are imprisoned in a maximum-security S.H.I.E.L.D. superhuman prison beneath the for illegally altering their genetic code. Octavius wills his confiscated robotic tentacles to attack S.H.I.E.L.D. soldiers and scientists, shuts down the prison's power, and releases the others. Nick Fury sends agents to collect Peter Parker (Spider-Man) in case Osborn tries to hurt him.

Via phone, Osborn demands $100 million, amnesty for himself and the others, and the return of his assets, or he will publicize his treatment at the hands of S.H.I.E.L.D. Fury dispatches the to prevent this, but it turns out to be a ploy: The escaped prisoners return to attack the Triskelion and abduct Spider-Man to make him their leader by blackmailing him with the life of his Aunt May. With Spider-Man, the criminals attack the , where they are confronted by the Ultimates. The criminals are re-captured, Spider-Man's aunt is released from S.H.I.E.L.D. security, and Osborn is kept half-transformed in cryogenic storage.