Endless knot
Not to be confused with The Endless Not.
"The Eternal Knot" redirects here. For the 2001 classical album, see Adiemus IV: The Eternal Knot. 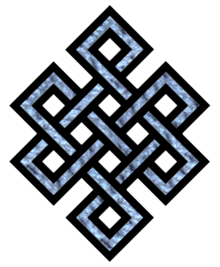 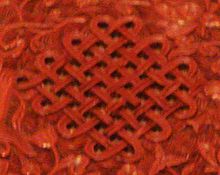 The endless knot or eternal knot (Sanskrit: Shrivatsa; Tibetan Dpal be'u) is a symbolic knot and one of the Eight Auspicious Symbols. It is an important cultural marker in places significantly influenced by Tibetan Buddhism such as Tibet, Mongolia, Tuva, Kalmykia, and Buryatia. It is also sometimes found in Chinese art and used in Chinese knots.

The endless knot has been described as "an ancient symbol representing the interweaving of the Spiritual path, the flowing of Time and Movement within That Which is Eternal. All existence, it says, is bound by time and change, yet ultimately rests serenely within the Divine and the Eternal."[citation needed] Various interpretations of the symbol are:

Endless knots in other cultures

Endless knots come as mystic/mythological symbols have developed independently in various cultures. A well-known example is the various Celtic knots.

The interlaced form of the unicursal hexagram of occultism is topologically equivalent to the Buddhist endless knot.[1]