The squirrel monkeys are the New World monkeys of the genus Saimiri. They are the only genus in the subfamily Saimirinae.

Squirrel monkeys live in the tropical forests of Central and South America in the canopy layer. Most species have parapatric or allopatric ranges in the Amazon, while S. oerstedii is found disjunctly in Costa Rica and Panama.

Squirrel monkey fur is short and close, colored olive at the shoulders and yellowish orange on its back and extremities. Their throat and the ears are white and their mouths are black. The upper part of their head is hairy. This black-and-white face gives them the name "death's head monkey" in several Germanic languages (e.g., German Totenkopfaffen, Swedish dödskalleapor, Dutch doodshoofdaapjes) and Slovenian (smrtoglavka).

Like most of their New World monkey relatives, squirrel monkeys are diurnal and arboreal. Unlike the other New World monkeys, their tail is not used for climbing, but as a kind of "balancing pole" and also as a tool. Their movements in the branches can be very rapid.

They live together in multi-male/multi-female groups with up to 500 members. These large groups can, however occasionally break into smaller troops. They have a number of vocal calls, including warning sounds to protect themselves from large falcons, which are a natural threat to them. Their small body size also makes them susceptible to predators such as snakes and felids. For marking territory, squirrel monkeys rub their tail and their skin with their own urine.

The mating of the squirrel monkeys is subject to seasonal influences. Females give birth to young during the rainy season, after a 150- to 170-day gestation. The mothers exclusively care for the young. Saimiri oerstedti are weaned by 4 months of age, while S. boliviensis are not fully weaned until 18 months old. Female squirrel monkeys reach sexual maturity at age 3 years, while males take until age 5. They live to about 15 years old in the wild, and over 20 years in captivity. Menopause in females probably occurs in the mid-teens.[2]

The Common Squirrel Monkey S. sciureus is captured for the pet trade and for medical research[3] but it is not threatened. Two squirrel monkey species are threatened: S. oerstedti and S. vanzolinii are listed as Vulnerable by the IUCN.[4][5] 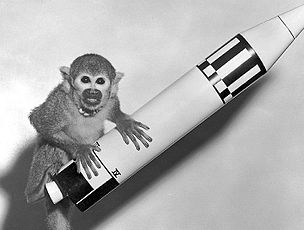 "Baker", an 'astronaut' squirrel monkey, rode into space as part of the United States space program, and returned safely.

Until 1984, all South American squirrel monkeys were generally considered part of a single widespread species, and many zoologists considered the Central American Squirrel Monkey to be a member of that single species as well.[1][6] The two main groups currently recognized can be separated by the white above the eyes; it being shaped as a Gothic ("pointed") Arch in the S. sciureus group, while it is shaped as a Roman ("rounded") Arch in the S. boliviensis group.[7]

Color vision in squirrel monkeys has been extensively studied as a stand-in for human ailments.[9] In humans, two genes for color vision are found on the X chromosome. Typically, one gene (OPN1LW) produces a pigment that is most sensitive to the 564 nm wavelength, while the other gene (OPN1MW) produces pigment most sensitive to 534 nm. In squirrel monkeys, there is only one gene on the X chromosome but it exists in three varieties: one is most sensitive to 538 nm, one to 551 nm, and one to 561 nm. Since males have only one X chromosome, they are dichromatic, although with different sensitivities. Females, on the other hand, have two X chromosomes, so some of them can have copies of two different alleles. The three alleles seem to be equally common, leading to one-third of females being dichromatic while two-thirds are trichromatic.[10] Recently, gene therapy has given the human OPN1LW gene to adult male squirrel monkeys, producing behavior consistent with trichromatic color vision.[9]