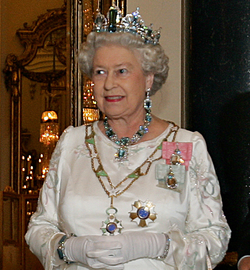 Queen Elizabeth II has rarely given press interviews, and her views on political issues are largely unknown except to those few heads of government in her confidence. Conservative in dress, she is well known for her solid-colour overcoats and matching hats which allow her to be seen easily in a crowd.[1] She attends many cultural events as part of her public role. Her main leisure interests include horse racing,[2] photography,[3] and dogs, especially her Pembroke Welsh Corgis.[4]

Always a popular figure in the UK and many other countries, opinion polls have almost always shown that she has an excellent approval rating, currently over 80%;[5] and often significantly higher than that of her elected Prime Ministers. Since she uses little political power in the day-to-day running of the country outside of her traditional ceremonial and advisory duties, she is unlikely to be held responsible for unpopular policies followed by elected politicians. However, her weekly meetings with the Prime Minister, and the images of her working hard at her desk reading government documents, make it appear as if she is not out of touch with her nation. In 2002, the Queen was ranked 24th in the 100 Greatest Britons poll. However, in 1997, she and other members of the Royal Family were perceived in the British tabloid press as cold and unfeeling when they did not participate in the public outpouring of grief at the death of Diana, Princess of Wales[6]. The Queen ignored precedent to bow to Diana's coffin as it passed Buckingham Palace and also gave a live television broadcast paying tribute to Diana.[7] These actions redressed tabloid opinion.

Elizabeth's public image has noticeably softened in recent years; although she remains reserved in public, she has been seen laughing and smiling much more than in years past, and has shed tears during emotional occasions such as at Remembrance Day services,[8] the memorial service at St Paul's Cathedral for those killed in the September 11, 2001 attacks, and in Normandy, for the 60th anniversary of D-Day, where she addressed the Canadian troops. During most public appearances, she is dressed in solid colors, as this enhances visibility from a distance.

In recent years Elizabeth II has also been portrayed as being a very modern grandmother. She said to have been "addicted" to playing on a Nintendo Wii bought by Kate Middleton for her grandson, Prince William, and is also said to have set up her own e-mail account, and own a mobile phone and an iPod.[9] When President Barack Obama visited the Queen and Prince Philip in April 2009, he gave her a personalised iPod, pre-loaded with around forty "classic" show tunes and video footage of her 2007 visit to Virginia.[10] On 21 May 2009, it was reported that gaming company THQ had given the Queen a special version of the Nintendo Wii. Instead of the usual white plastic casing, the Queen's personalised version was gold-plated.[11]

In matters of diplomacy, Elizabeth is formal, and royal protocol is generally very strict. Though some of the traditional rules for dealing with the Monarch have been relaxed during her reign (bowing is no longer required, for example, although it is still frequently performed), other forms of close personal interaction, such as touching, are discouraged by officials. At least five people are known to have broken this rule, the first being Alice Frazier who hugged the Queen in 1991 during her 13-day United States visit, when Elizabeth, accompanied by Barbara Bush and Jack Kemp, visited a government housing project in Washington.[12] The second was Paul Keating, Prime Minister of Australia, when he was photographed with his arm around the Queen in 1992 (and was afterwards dubbed the "Lizard of Oz" by the British tabloid press). Keating was received in audience at her private Balmoral home. The third was the Canadian cyclist Louis Garneau, who did the same thing ten years later, for a photograph with the Queen. The Queen appeared to take no offence at Garneau's action.[13] The fourth was John Howard, Paul Keating's successor as Prime Minister of Australia. In 1997 during the Cabot 500 celebrations of Newfoundland and Labrador, the then Premier Brian Tobin placed an arm behind her while walking up a staircase. This was frowned upon in the news regarding to Tobin breaking the royal rule, but the Premier said that he placed his arm around her as an effort to help an elderly woman climb the stairs. In 2009, the Queen initiated an affectionate gesture with First Lady Michelle Obama at a palace reception she attended with Barack Obama. The Queen rested her hand briefly at the small of the First Lady's back, a gesture that Mrs. Obama returned. It was remarked at the time as unprecedented, and described afterwards by a palace spokeswoman as "a mutual and spontaneous display of affection and appreciation between The Queen and Michelle Obama."[14]

Elizabeth has attended many cultural events as part of her public role. Her first appearance on live television in Canada was in Prescott, Ontario, in 1959 when, as Queen of Canada, she opened the Saint Lawrence Seaway.[15] She has given an annual Christmas Message to the Commonwealth every year apart from 1969 since she became Queen; in 2001 the Royal Christmas Message was webcast on the Royal website for the first time, and in 2006 it was made available as a podcast.

The journalist and BBC Radio 4 presenter John Humphrys has long stated that his career ambition is to get the first full interview with the Queen. In 2006, the Queen came close to an orthodox interview when she agreed to be portrait-painted by the popular Australian artist and personality Rolf Harris, who engaged in small talk with her, on film, and with Palace permission. It was shown on the BBC, CBC and ABC. However, their conversation ventured little beyond previous portraits of the Queen and Royal art history in general, and the Queen's responses to Harris's conversational overtures were notably crisp and monosyllabic. The 1992 BBC documentary on the Queen, Elizabeth R, directed by Edward Mirzoeff on the fortieth anniversary of her accession, attracted record audiences for a factual programme.

The BBC, however, along with RDF Media Group, became the target of Her Majesty's lawyers, Farrer & Co, after the broadcaster aired a documentary trailer for Monarchy: The Royal Family at Work‎ which was edited in such a way as to make it appear as though The Queen had stormed out of a photo shoot with photographer Annie Leibovitz. The BBC had earlier apologised for the misrepresentation, which was fuelled by BBC1 controller Peter Fincham describing the Queen as "losing it a bit and walking out in a huff," but the Queen and Buckingham Palace were not satisfied with the results and pushed to sue for breach of contract.[16]

The Queen is the subject of "Her Majesty", written by Paul McCartney and featured on the Beatles' album Abbey Road (1969); McCartney played the song at the Party at the Palace concert during the Golden Jubilee in 2002. In 1977, The Sex Pistols issued "God Save the Queen", which became a controversial hit single, inspiring the punk rock movement with its lyrics suggesting there was "no future" and comparing England to a "fascist regime." The Smiths released the song and album The Queen Is Dead in 1986. The Pet Shop Boys have a track called Dreaming of the Queen. The Queen is the subject of 'Elizabeth My Dear,' which appears on The Stone Roses' eponymous debut. The Queen also plays detective in the Her Majesty Investigates series of mystery novels by C.C. Benison, which includes Death at Buckingham Palace and Death at Windsor Castle. The Queen is the subject of "The Queen and I", written by Sue Townsend

In 2006, she was portrayed by Helen Mirren in the Golden Globe- and Academy Award-nominated Stephen Frears film The Queen, a fictional account of the immediate events following the death of Princess Diana. The film ended up as the most critically acclaimed film of 2006.[17] Mirren, who had been appointed into the Order of the British Empire in 2003, won the Oscar for her work in the film and, in her acceptance speech, she paid tribute to Queen Elizabeth II. "For 50 years and more, Elizabeth Windsor has maintained her dignity, her sense of duty and her hairstyle," she said.[18]

In a 2006 book, Who Owns the World: The Hidden Facts Behind Landownership, Kevin Cahill claimed that Queen Elizabeth II holds ownership of one sixth of the land on the Earth's surface, more than any other individual or nation. This amounts to a total of 6,600 million acres (2.7×1013 m2) in 32 countries.[19] However, this is based on the legal technicality that the Crown as an institution owns all the territory over which it rules, like any government of a non-allodial state. This land does not belong to the Queen personally, but to the governments of the respective realms over which she reigns.[citation needed]

Private Eye, the British satirical magazine, has given the British royal family working-class nicknames, as though they were characters in a soap opera.[20] The Duke of Edinburgh is "Keith", the late Princess Margaret was "Yvonne", and the late Diana, Princess of Wales, was dubbed "Cheryl". Queen Elizabeth II's nickname is "Brenda".

There are few if any official quotations attributable to the Queen since she was crowned, since the breach of protocol attaching to the reporting of comments provided in confidence has generally been extended to the public domain. It is, however, neither illegal nor unlawful to report what the Queen has said.

Elizabeth has been portrayed on screen by:

On television, Elizabeth has been played by:

Jan Ravens was the voice for a latex puppet caricature of her in Spitting Image (1984–1996), and gave radio and television comedy impressions of her in Dead Ringers. Scott Thompson gave a recurring impression of Queen Elizabeth II on the Canadian skit television show The Kids in the Hall in the early 1990s. Tracey Ullman's depiction of the Queen was among many roles she played on the television series Tracey Takes On. The Simpsons portrayed the Queen during the episode "The Regina Monologues" (2003). She was also shown in the SpongeBob SquarePants TV movie Truth or Square.

The Queen is Patron of more than 620 charities and organisations[22] including: