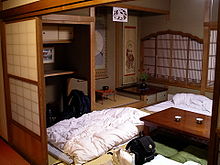 A room is any distinguishable space within a structure. Usually, a room is separated from other spaces or passageways by interior walls; moreover, it is separated from outdoor areas by an exterior wall, sometimes with a door. Historically the use of rooms dates at least to early Minoan cultures about 2200 BC, where excavations on Santorini, Greece at Akrotiri reveal clearly defined rooms within certain structures.[1] 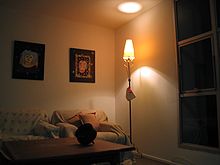 In early structures, diverse room types could be identified to include bedrooms, kitchens, bathing rooms, reception rooms, and other specialized uses. The aforementioned Akrotiri excavations reveal rooms sometimes built above other rooms connected by staircases, bathrooms with alabaster appliances such as washbasins, bathing tubs, and toilets, all connected to an elaborate twin plumbing systems of ceramic pipes for cold and hot water separately.[1] Ancient Rome manifested very complex building forms with a variety of room types, including some of the earliest examples of rooms for indoor bathing. The Anasazi civilization also had an early complex development of room structures, probably the oldest in North America, while the Maya of Central America had very advanced room configurations as early as several hundred AD. By at least the early Han Dynasty in China (e.g. approximately 200 BC), complex multi-level building forms emerged, particularly for religious and public purposes; these designs featured many roomed structures and included vertical connections of rooms. 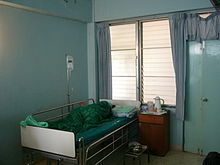 Many houses are built to contain a box-room (box room or boxroom) that is easily identifiable, being smaller than the others. The small size of these rooms limits their use, and they tend to be used as a small single bedroom, small child's bedroom, or as a storage room.

Traditionally, and often seen in country houses and larger suburban houses up until the 1930s in Britain, the box room was literally for the storage of boxes, trunks, portmanteaux, and the like, rather than for bedroom use.[citation needed]