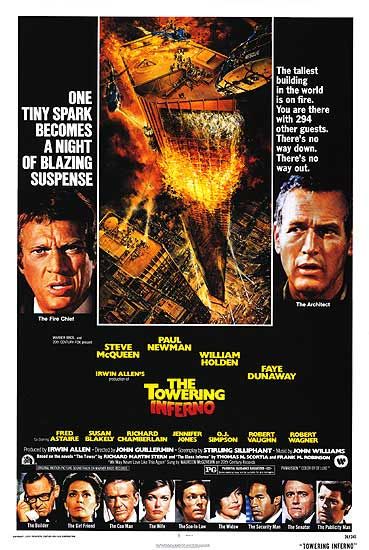 caption = Poster for the film with McQueen and Newman at the top, and the other stars at the bottom
director =
(action sequences)
producer =
writer = Novel

"The Towering Inferno" is a 1974 starring Steve McQueen and and directed by . The film was adapted by from the novels "The Tower" by and "" by and .

Architect Doug Roberts () arrives from a vacation for the dedication of the newly completed in . Upon his arrival, facts concerning the deviation of his design specifications come to light after a power surge from a routine check blows out a circuit breaker. The power surge also sparks a fire in a storage room, which because of problems with the buildings security system, goes undetected. In Roberts' absence, chief electrical engineer Roger Simmons (), the son-in-law of building financier Jim Duncan (), has cut corners to complete construction under-budget. Simmons insists the building is up to minimum code standards but nowhere near what Roberts called for in his design.

Prior to the dedication party, numerous sub-plots about the dedication attendees are revealed and explored. Duncan orders all the building's exterior lights turned on dedication night to impress visiting dignitaries, exacerbating the fire in a utility room on the 81st floor. Even after the fire is discovered and reported, Duncan dismisses warnings and permits the party to continue. Subsequent fires break out throughout the building, spreading rapidly, and the owner is finally convinced to summon the .

The firefighters arrive, but Chief Michael O'Hallorhan (Steve McQueen) warns that the building is too high for his men to fight it effectively from the outside. As the department struggles to fight the spreading fire from inside, the 300 party guests in the 135th floor Promenade Room are trapped. The remainder of the film follows the rescuing of the guests, and depicts many escape attempts and deaths. Rooftop escape by helicopter is abandoned when winds cause the first attempt to crash into the roof setting it ablaze. Escape by breeches buoy to the roof of a neighboring skyscraper, the fictional 102-story Peerless Building, has limited success and is thwarted by panicked guests fighting their way onto the single chair and falling to their deaths when the rope breaks under the weight. Despite near-disaster, 11 guests and a fireman get down in the exterior scenic elevator after an emergency rescue by O'Hallorhan.

With the spreading fire 15 minutes from the Promenade Room, a final plan is hatched to put out the approaching flames by blowing the million-gallon water tanks at the top of the building. Some people will die in the flood, but it offers the best chance of survival. In the climax, O'Hallorhan agrees to be dropped by helicopter onto the roof to meet Roberts at the water tanks to set the plastic explosives. The fire chief, trained for explosives, instructs the architect how to set the charges. The two men quickly finish and retreat to the restaurant. Everyone ties themselves down to avoid being washed away by the water rushing from the destroyed tanks. The plan succeeds and the water puts out the fire. O'Hallorhan, Roberts and most of the other partygoers survive, but the torrent of water claims several casualties.

At the end, O'Hallorhan comments that the casualties could have been much worse, but a worse disaster is possible if builders and architects are not willing to take and fire fighting into account more seriously with tall buildings. Roberts promises to consult with O'Hallorhan on such matters in the future.

*Scott Newman (son of Paul Newman) as the young acrophobic fireman.
* as Paula Ramsey
*Jack Collins as Mayor Robert Ramsey
* as Tim
* as Carlos the bartender
* as Kappy
* as Flaker
* as Deputy Chief #1
* as Phillip Albright
* as Will Giddings
* as Fireman Scott

After the success of "The Poseidon Adventure", bought the rights to film "The Tower" for $390,000. Eight weeks later, Irwin Allen discovered another skyscraper-on-fire novel, "The Glass Inferno", and bought the rights for $400,000 for . In order to avoid having two similar films produced at the same time, the productions were combined, with a budget of $14 million (over $58 million adjusted for inflation 1974-2005). Each studio paid half of the production costs. In return, Fox was given the box office receipts and Warner Bros. the profits from the rest of the world.

, who won an Oscar for his adaptation of "In the Heat of the Night", was asked to combine the two similar novels into a single screenplay. Silliphant took seven main characters from each book and combined the plots for the storyline. In "The Tower", a bomb in the main utility room of a fictitious 140-floor tower (the world's tallest) causes a power surge, which sets a janitor's closet on fire; the escape from the top floor is by to the adjacent 110-story North Tower of the , and is only partially successful (more than a hundred partygoers die when fire overtakes the restaurant on the top floor). In "The Glass Inferno", a discarded cigarette sets the janitor's closet in a 60-story tower on fire; the escape from the top floor is by helicopter, and everyone left in the restaurant escapes.

The movie's 57 sets and four complete camera crews established records for a single film on the Twentieth Century Fox lot. In addition, was hired to sing the Oscar-winning love ballad, "".

The movie was released the year the , the world's tallest building, opened in Chicago and a year after the two skyscrapers &mdash; at that time, among the newest, tallest buildings in the world &mdash; opened in . The screenplay may have been inspired by catastrophic fires in the in 1972 and the 1974, both in , fact|date=August 2008. Both novels upon which this movie was based were inspired by construction of the World Trade Center towers and concerns over what would happen if fire broke out in a highrise tower. Although the two disasters were not alike &mdash; in particular, the fictional did not collapse &mdash; following the events of , the film was often referred to by the media.

The atrium of 's Hyatt Regency Hotel (at 5 ) was used as the lobby for the fictional . This hotel features three glass-walled elevators identical to the glass-walled scenic elevator of the fictional Glass Tower. (This lobby and the elevators also featured in films such as ' comedy "", in the spy thriller "" and in "Time After Time".)

The building at in San Francisco was used to double for the outside facade and plaza of the Glass Tower. Utility areas of the Century City complex in Los Angeles (adjacent to the Twentieth Century Fox studios) stood in for the Glass Tower's security control room and water tank area. The Glass Tower itself was a in the opening shot and an 80-foot miniature fitted with propane gas jets for exterior fire scenes.

The hotel was the third and final location used for the ride aboard the scenic elevator, for a scene in which characters ride the elevator towards the Promenade Room. Once the elevator clears the wall in front of the windows of the elevator, the San Francisco skyline is visible and the Bay Bridge can be seen in its entirety.

There are many small parts in the movie played by actors who appeared in "The Poseidon Adventure", which Irwin Allen also produced. In a touch of , , the actress who played the role of the mayor's wife 'Paula Ramsey', is 's wife. Jennifer Jones role of 'Lisolette Mueller', her last before retiring from acting, was originally offered to .

McQueen, Newman and Holden all tried to obtain top billing. Holden was refused as his star power was not considered in the league of McQueen and Newman. To provide dual top billing and mollify McQueen, the credits were arranged diagonally, with McQueen at the lower left and Newman at the upper right. Thus, each actor appeared to have top billing depending on whether the poster was read from left to right or top to bottom. [ [http://www.art.com/asp/sp-asp/_/pd--10134441/The_Towering_Inferno_Style_A.htm The Towering Inferno Masterprint at Art.com ] ] Technically, McQueen has top billing and is mentioned first in the film's trailers; however, at the end of the movie, as the cast's names roll from the bottom of the screen, Newman's name is fully visible first, something McQueen apparently didn't catch. This was the first time that this type of "staggered but equal" billing had been used for a movie, although the same thing had been discussed for the same two actors several years earlier when McQueen was going to play the Sundance Kid in "". (McQueen ultimately passed on the part and was replaced by , who didn't enjoy McQueen's status and took second billing to Newman.) Today, it's become understood that whoever's name appears to the left has top billing but this was by no means the case when "The Towering Inferno" was produced and the procedure was new.

The movie's opening credits included a dedication to "the s of the world".

The events in the film, in some respects, resemble those which occurred in real life when a fire broke out at the in , in August 2000. The term "towering inferno" was used by many media organizations to describe the incident.