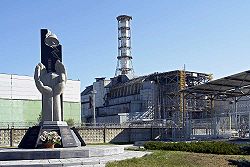 The Chernobyl Nuclear Power Plant or Chornobyl Nuclear Power Plant (Ukrainian: Державне спецiалiзоване пiдприємство "Чорнобильська АЕС", Russian: Чернобыльская АЭС) is a decommissioned nuclear power station near the city of Pripyat, Ukraine, 18 km (11 mi) northwest of the city of Chernobyl, 16 km (9.9 mi) from the Ukraine–Belarus border, and about 110 km (68 mi) north of Kiev. Reactor 4 was the site of the Chernobyl disaster in 1986.

The nuclear power plant site is to be cleared by 2065. On January 3, 2010, a Ukrainian law stipulating a "programme" toward this objective came into effect.[1] 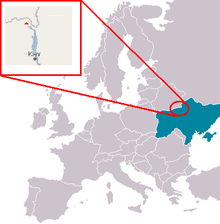 The V.I. Lenin Nuclear Power Station (Russian: Чернобыльская АЭС им. В.И.Ленина) as it was known during the Soviet times, consisted of four reactors of type RBMK-1000, each capable of producing 1,000 megawatts (MW) of electric power (3.2 GW of thermal power), and the four together produced about 10% of Ukraine's electricity at the time of the accident.[2] The Chernobyl station is 18 km (11 mi) northwest of the city of Chernobyl, 16 km (9.9 mi) from the border of Ukraine and Belarus and about 100 km (62 mi) north of Kiev. Construction of the plant and the nearby city of Pripyat to house workers and their families began in 1970, with reactor No. 1 commissioned in 1977. It was the third nuclear power station in the Soviet Union of the RBMK-type (after Leningrad and Kursk), and the first ever nuclear power plant on Ukrainian soil. The completion of the first reactor in 1977 was followed by reactor No. 2 (1978), No. 3 (1981), and No. 4 (1983). Two more reactors, nos. 5 and 6, capable of producing 1,000 MW each, were under construction at the time of the accident. Reactor No. 5 was about 70% complete at the time of the accident and was scheduled to start operating in 7 November 1986. However, the works were halted on January 1st 1988 leaving most of the machinery behind.

The electrical energy is generated by a pair of 500 MW hydrogen-cooled turbogenerators. These are located in the 600 m (1,969 ft)-long machine hall, adjacent to the reactor building. The turbines—the venerable five-cylinder K-500-65/3000—are supplied by the Kharkiv turbine plant; the electrical generators are the TBB-500. The turbine and the generator rotors are mounted on the same shaft; the combined weight of the rotors is almost 200 t (220 short tons) and their nominal rotational speed is 3000 rpm. The turbogenerator is 39 m (128 ft) long and its total weight is 1,200 t (1,300 short tons). The coolant flow for each turbine is 82,880 t/h. The generator produces 20 kV 50 Hz AC power. The generator's stator is cooled by water while its rotor is cooled by hydrogen. The hydrogen for the generators is manufactured on-site by electrolysis.[4] The design and reliability of the turbines earned them the State Prize of Ukraine for 1979.

The Kharkiv turbine plant (now Turboatom) later developed a new version of the turbine, K-500-65/3000-2, in an attempt to reduce use of valuable metal. The Chernobyl plant was equipped with both types of turbines; Block 4 had the newer ones. The newer turbines, however, turned out to be more sensitive to their operating parameters, and their bearings had frequent problems with vibrations.[5]

In 1982, a partial core meltdown occurred in reactor No. 1 at the Chernobyl plant. The extent of the accident was not made public until years later, in 1985. The reactor was repaired and put back into operation within months.

On Saturday, April 26, 1986, a disaster occurred at reactor No. 4, which has been widely regarded as the worst accident in the history of nuclear power. As a result, reactor No. 4 was completely destroyed and has since been enclosed in a concrete and lead sarcophagus to prevent further escape of radiation. Large areas of Europe were affected by the accident. The radiation cloud spread as far away as Norway, in Scandinavia.

After the 1991 fire, there was discussion about replacing the damaged Turbine 4 in Reactor 2 with Turbine 7 from Reactor 4 (the reactor damaged in 1986), because Turbine 7—undamaged in the 1986 explosion—was subsequently unused and was in working order, this would provide a low-cost alternative to full replacement of the turbine.[citation needed]

Ukraine's 1991 independence from the Soviet Union generated further discussion on the Chernobyl topic, because the Rada, Ukraine's new parliament, was composed largely of young reformers. Discussions about the future of nuclear energy in Ukraine helped move the government toward the political decision to cancel the operation of Reactor 2.[citation needed]

After the explosion at reactor four, the remaining three reactors at the power plant continued to operate. In 1991, reactor two suffered a major fire, and was subsequently decommissioned.[6] In November 1996, reactor one was shut down, followed by reactor three on December 15, 2000, making good on a promise by Ukrainian president Leonid Kuchma that the entire plant would be closed.[6]

Even after the last reactor shutdown, people continue to work at the Chernobyl plant until reactor units 1, 2, and 3 are totally decommissioned, which is expected to take years. The first stage of decommissioning is the removal of the highly radioactive spent nuclear fuel, which is placed in deep water cooling ponds. However, storage facilities for this are not suitable for long term containment, and those on site do not have the capacity for all the spent fuel from units 1, 2 and 3. A second facility is planned for construction that will use dry storage technology suitable for long term storage and have the required capacity.[7]

Removal of uncontaminated equipment has begun at unit 1 and this work could be complete by 2020–2022.[8]

The remains of reactor unit 4 will remain radioactive for some time. The isotope responsible for the majority of the external gamma radiation dose at the site is Caesium-137 which has a half-life of about 30 years. It is likely that with no further decontamination work the gamma ray dosage at the site will return to background levels in about 300 years. However, as most of the alpha emitters are longer lived, the soil and many surfaces in and around the plant are likely to be contaminated with transuranic metals such as plutonium and americium, which have much longer half-lives. It is planned that the reactor buildings will be disassembled as soon as it is radiologically safe to do so.

On September 17, 2007, it was announced that a new steel containment structure named the New Safe Confinement (NSC) would be built to replace the aging and hastily-built sarcophagus that currently protects reactor unit 4. The project, financed by an international fund managed by the European Bank for Reconstruction and Development (EBRD), will be designed and built by the French-led consortium Novarka, which includes the companies Bouygues and Vinci. Novarka will build a giant arch-shaped structure out of steel, 190 m (623 ft) wide and 200 m (656 ft) long to cover the old crumbling concrete dome that is currently in use.

This steel casing project is expected to cost $1.4 billion (£700 million, €1 billion), and expected to be completed in 2013.[9] A separate deal has also been made with the American firm Holtec to build a storage facility within the exclusion zone for nuclear waste produced by Chernobyl.

The Emergency Situations Ministry of Ukraine will allow tourists to go on special tours of the plant in 2011.[10]