Marjorie Bruce or Marjorie de Brus (1296 – 2 March 1316) was the eldest daughter of Robert the Bruce, King of Scots by his first wife, Isabella of Mar, and the founder of the Stewart dynasty. Her marriage to Walter, High Steward of Scotland gave rise to the House of Stewart. Her son was the first Stewart monarch, King Robert II of Scotland. 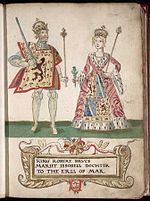 Marjorie's parents, as depicted in the 1562 Forman Armorial

Her mother, Isabella, a nineteen-year-old noblewoman from the Clan Mar, died soon after giving birth to her. Her father was then the Earl of Carrick. Marjorie was named after her father's mother, Marjorie, Countess of Carrick.

According to legend, her parents had been very much in love, and Robert the Bruce did not remarry until Marjorie was six years old. In 1302, a courtier named Elizabeth de Burgh became her stepmother.

On 27 March 1306, her father was crowned King of Scots at Scone, Perthshire, and Marjorie, then nine years old, became a Princess of Scotland. 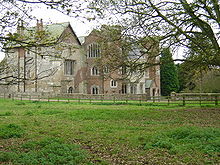 The Priory of Watton, where Marjorie was imprisoned under Edward I

Three months after the coronation, in June, 1306, her father was defeated at the Battle of Methven. He sent his female relatives (his wife, two sisters and Marjorie) north with his supporter the Countess of Buchan, but by the end of June the band of Bruce women were captured and betrayed to the English by the Earl of Ross.

As punishment, Edward I sent his hostages to different places in England. Princess Marjorie went to the convent at Watton; her aunt Christina Bruce was sent to another convent; Queen Elizabeth was placed under house arrest at a manor house in Yorkshire (because Edward I needed the support of her father, the powerful Earl of Ulster, her punishment was lighter than the others'); and Marjorie's aunt Mary Bruce and the Countess of Buchan were imprisoned in wooden cages, exposed to public view, Mary's cage at Roxburgh Castle and Countess Isabella's at Berwick Castle. For the next four years, Marjorie, Elizabeth, Christina, Mary and Isabella endured solitary confinement, with daily public humiliation for the latter two. A cage was built for Marjorie at the Tower of London, but Edward I reconsidered and instead sent her to the convent.[1] Christopher Seton, Christina's husband, was executed.

Edward I died on 7 July 1307. He was succeeded by his son, Edward II, who subsequently held Marjorie captive in a convent for about seven more years. She was finally set free around 1314, possibly in exchange for English noblemen captured after the Battle of Bannockburn (23 June – 24 June 1314). 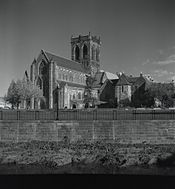 Walter Stewart, 6th High Steward of Scotland distinguished himself in the battle and was rewarded the hand of the adolescent princess. Her dowry included the Barony of Bathgate in West Lothian. The original site of Bathgate Castle, which was part of the dowry, can be found on the grounds of Bathgate Golf Club. The site is protected by the Historic Scotland organisation and the Club is debarred from carrying out any excavation work on the site without prior permission.

Two years later, on 2 March 1316, Marjorie went horse-riding near Paisley, Renfrewshire while heavily pregnant. Her horse was suddenly startled and threw her to the ground at a place called "The Knock." She went into premature labour and delivered the child at Paisley Abbey, surviving the birth by a few hours at most.

She was nineteen at the time of her death, like her mother, who was also nineteen years old when she died in childbirth.

At the junction of Renfrew Road and Dundonald Road in Paisley, a cairn marks the spot where Marjorie reputedly fell from her horse. She is buried at the abbey.

Her son succeeded his childless uncle David II of Scotland in 1371 as King Robert II. Her descendants include the House of Stuart and all their successors on the throne of Scotland, Great Britain and the United Kingdom.

The young adult novel Girl in a Cage by Jane Yolen and Robert J. Harris features Marjorie Bruce as its protagonist. In it, Marjorie is imprisoned in a cage. Although there is a preface stating that it is fictional, many have taken it to be a true story.