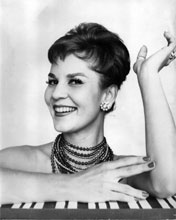 Ms. Martinez-Casada was born into one of Cuba's theatrical families. That family started with her great-grandfather who owned a theater. His daughter Luisa has a theater in Cuba named after her. Ms. Martinez-Casado grandparents, Manolo Martinez-Casado and Celia Adams were both actors and so where their eight children.

Ana Margarita's direct involvement did not begin until she was 12 years old, when her mother wanted her to study piano as she thought all girls needed some sort of talent. A distant cousin, lived near them and everyone encouraged that young Ana be sent to her. Chance would have it that the cousin did not teach piano but voice, and was willing to work with Ana to see if there was a talent. Ana Margarita was 17 when her voice teacher began to work on a zarzuela for her students to showcase their talent, nearly a year in preparations Ana Margarita, a soprano, starred in a successful version of "Luisa Fernanda" that would lead to securing her first television contract for the CMQ Network, Cuba's largest entertainment company . She debuted with an orchestra conducted by maestro (the genius behind the zarzuela of "Cecilia Valdes") who introduced her as the next big star. That television appearance led to an infinity of other works, with guest roles on every variety musical show of its day including "El Gran Teatro Esso" among others. Her voice was so loved that when the Cuban cultural giant, Pro Arte Musical, mounted a version of "Amal and the Night Visitors" Ana Margarita was cast opposite . The offers and opportunities kept growing, such that she not only performed Zarzuelas but soon was doing operettas as well; "El Conde de Luxemborgo", "Los Molinos del Viento", "La Corte del Pharaon", "Luisa Fernanda", were just some of the pieces she performed to much success but her stage work culminated at that point when Gonzalo Roig himself asked Ana to play the title character in "Cecilia Valdes", in fact so confident in her was he that she not only played Cecilia but she also played Isabel simultaneously (the two characters never meet on stage). It was the highlight of young Ana's career. This led to offers from every outlets, including nightclubs. Ana mounted shows at the Casino Parisien of the in Havana and the Havana Hilton. Her nightclub engagements led to concerts, and three records.

Having left Cuba in 1960, for a two-week concert engagement at the Hotel San Juan in , only carrying two suitcases, her daughter (she had married and divorced a Cuban surgeon) she had no idea that she would not return to her native Cuba for nearly 40 years. While in San Juan she was invited to perform with the Tropicana ensemble in , where she stayed for 10 years during which time she married a fellow Cuban actor and had a daughter, Beatriz (her first Ana was from her previous marriage). During her time in Mexico, she did a whole variety of work, from starring in a cabaret act, touring with an ensemble company, stage and television work. During a concert engagement in she was contracted for a television network run by Cubans (contemporaries and acquaintances of her father). During her work there, she did a variety of roles and worked opposite such legendary Mexican figures as and as well as had a variety show of her own. She became quite well known for her roles in musical theater, including a performance opposite the legendary in "Hello Dolly". After a decade in Mexico, the young family finally made the move to the United States (she had previously lived temporarily in , and ). Upon her arrival in Miami in 1970 she began to work doing a variety show at the restaurant "Les Violins" a South Florida landmark. After a short while, Cuban star Marta Perez, who had since relocated to Miami and formed a theater group recruited Ana Margarita to return to the stage. While in South Florida she appeared in performances of "The King and I", "Man of La Mancha", "The Fantastix", "Private Lives", and "Cecilia Valdes" not to mention taking every job available including radio soap operas, TV commercials and nearly everything that came up. It was in the late 1970's that her career in the United States took off when she was cast as Juana Peña, in the classic television sitcom, "" for which she won an award.

After "¿Qué Pasa, USA?" came to an end in 1979, she had a supporting role in the film about exiled Cubans living in New York, "El Super". After 11 years living in Miami, Ana thought it was time for a change. She had worked with the , a theater group that had done productions in Miami (they had built the Teatro Bellas Artes in the heart of Little Havana's 8th street in Miami) and was invited to join their repertory company in , where she moved in 1981.