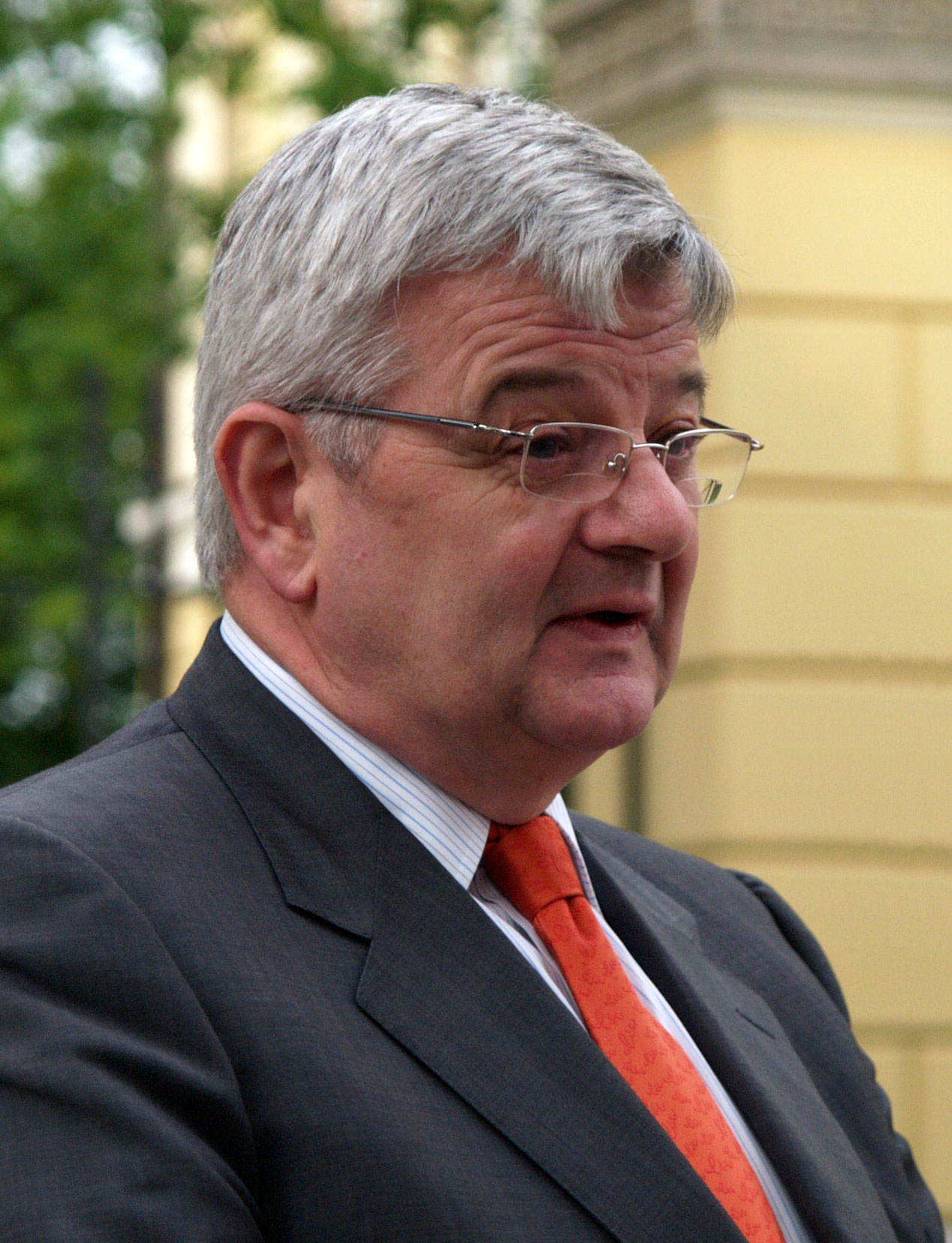 Dr. h.c. (Haifa) Joseph Martin "Joschka" Fischer Bundesminister a.D. (born ) was German foreign minister and Vice Chancellor in the government of from 1998 to 2005. He was a leading figure in the and according to opinion polls, [cite web|title=Weiterhin große Unzufriedenheit mit den Spitzenpolitikern|url=http://www.tagesthemen.de/deutschlandtrend/meldung330600.html|date=|language=German|accessdate=2008-04-24] he was the most popular politician in Germany for most of the government's duration. Following the September 2005 election, in which the Schröder government was defeated, he left office on , .

Fischer was born in in , the third child of a butcher, whose family had lived in for several generations, but had to leave the country in 1946 after Hungary was occupied by the . His nickname Joschka is derived from the Hungarian "Jóska", diminutive of Joseph (Hungarian "József"). Fischer dropped out of high school in 1965, and started an apprenticeship as a photographer which he quit in 1966. Because Fischer lacks a school-leaving certificate, he never attended a university or a college.

In 1967 he became active in the and left-wing movement (post-) 1968 (the so-called "Spontis"), first in and after 1968 in . Later Fischer had several unskilled worker jobs, among others in a left-wing bookstore in Frankfurt. During this period he began attending leftist university events as a guest, such as the lectures, "de rigueur" for revolutionary students, of , and . He studied the works of Marx, Mao and Hegel and became a member of the militant group "Revolutionärer Kampf" (Revolutionary Struggle). Fischer was a leader in several street battles fought by the anarchist "Putzgruppe" (literally "cleaning squad", with the first syllable being interpreted as an for "Proletarische Union für Terror und Zerstörung", "Proletarian Union for Terror and Destruction") which physically attacked a number of police officers. Photos of one such battle in March 1973, which were later to haunt him, show him clubbing policeman Rainer Marx

His close friendship with dates from this time. In 1971 he began working for the car manufacturer and tried to organise his fellow workers for a coming communist revolution. (This was not organising on behalf of an ordinary labour union: the vast majority of Opel's workers had already been organised by , the German metalworkers' union, decades earlier.) Six months later he was fired because of these political activities. He then made a living with unskilled work while continuing his activism. He worked as a taxi driver from 1976 to 1981 and later in a bookstore in Frankfurt.

In the "Deutscher Herbst" () of 1977, Germany was confronted with a series of left-wing terrorist attacks by the (RAF). According to Fischer's own account, witnessing these events, particularly the kidnapping and murder of , made him renounce violence as a means of political change. Instead, he became involved in the new social movements and later in the newly-founded , mainly in the state of .

In May 1981 the Hessian Secretary of Commerce was murdered with a firearm that in 1973 had been transported, among other weapons stolen from an American army base, in Fischer's car. [cite web|last=Karacs|first=Imre|title=Kohl turns his fire on the Greens|url=http://findarticles.com/p/articles/mi_qn4158/is_19980804/ai_n14167770|date=, |work=Independent, The (London)|accessdate=2008-04-24] Fischer maintained he had given the car to the later terrorist only for the purpose of having him install a new engine. Only later had he learned that the car had been used to transport stolen weapons.

As Foreign Minister, Fischer apologised for the violence of his "Putzgruppe" days, without disassociating himself from the radical movement. Some critics continue to charge Fischer with being the leading figure in a 1976 discussion, when participants decided to use Molotov cocktails in an upcoming demonstration in support of RAF member who had committed suicide. Fischer was arrested on of that year as a suspect in Molotov cocktail attacks on police, but was released after two days. Fischer has stated that he never used Molotov cocktails against the police. The firebombing of policeman 's police car left Weber with burns over 60% of his body.

Fischer has also been criticised for attending a 1969 conference of the , where called for an all-out war on Israel "until the end".

From 1983 to 1985, Fischer was a member of the for the Green party. In 1985, he became Minister for the Environment in Hessen in the first Social Democrat-Green coalition (1985-1987). Fischer caused a stir when he appeared at his oath of office ceremony wearing trainers. These trainers are now on display in a museum in . A notable situation which characterizes his attitude at the time occurred on Oct. 18, 1984, when he addressed , then vice president of the parliament, with the words: "With respect, Mr. President, you are an asshole" (German: "Mit Verlaub, Herr Präsident, Sie sind ein Arschloch.").
[

In the end of the eighties of the past century Fischer used to express his thoughts very frankly in the periodical of the Hessian Green party "Stichwort Grün". In the edition of October 1989, one month before the Berlin Wall fell, he published an article with the big heading: "Der Wiedervereinigung die Schnauze verbieten!" (shut up re-unification!)

Fischer was again Environment Minister in Hessen from 1991 to 1994, and, later on, became co-chairman of the Greens parliamentary party in the Bundestag. During his years in opposition, Fischer was respected for his oratory, as well as for the charisma he exuded on the political stage. For a large part of the 1990s, with the SPD languishing in the opinion polls, Fischer was referred to by his admiters as the "real" Leader of the Opposition. He leveraged this status into political success, as he moved the Green Party to the centre ground of German politics, paving the way for participation in the nation's federal government.

In September 1998 the Social Democrats, led by Gerhard Schröder, decisively defeated the Christian Democrat government of . With the SPD's 41% and the Greens' 7%, a coalition government could be formed. Schröder, the election victor, stated his preference for such a coalition, as did an overwhelming majority of the SPD. After several weeks of negotiations between Social Democrats and Greens, the new government took power on . Fischer became Minister of Foreign Affairs.

In 1999 Fischer supported German participation in the . This was an extremely controversial stance within the largely pacifist Green Party, because it meant that, for the first time since , German soldiers would actively participate in combat. He justified this war with allegations that was planning to commit against the Kosovo .

Fischer was also in favour of stationing German troops in , but he advised Schröder not to join the war in . Fischer also famously confronted US Defense Secretary Donald Rumsfeld about the lack of evidence on Iraq's possession of weapons of mass destruction. He is known as a good friend of . By 2005 he was the second longest-serving foreign minister in German postwar history (after ).

In 2005 Fischer was accused by critics of carelessly relaxing controls on visa regulations for , thus allowing many illegal immigrants to enter with fake identities. A parliamentary committee was established to examine the case, and unlike in other such committee hearings, Fischer's statement (and that of other top officials) was shown live on public TV. Fischer's appearance before the committee took twelve hours. (See ).

After the defeat of the coalition government in the 2005 election, Fischer announced that he would retire to the backbench. "After 20 years of power, now I want my freedom back", he was quoted as saying. On 2005, it was announced that (SPD) would succeed Fischer as Foreign Minister.

From September 2006 until 2007, Joschka Fischer was a senior fellow at the and a visiting professor at , both at . He has also spoken at other American universities on various topic in foreign affairs and international relations.

Fischer has consistently been the most popular German politician, leading the opinion polls for several years, even among supporters of other parties. This popularity may be attributed to the rise of the green party as well as to his office as foreign minister of Germany, which continues to be one of the most prestigious political offices in Germany as can be seen in opinion polls of his successors.

Until 1996, Fischer had been an outspoken connoisseur of good wines and food (regularly betting cases of expensive wine with opposition politicians on the outcome of elections), and had been overweight. Within a relatively short time he managed to lose an enormous amount of weight. He claimed that this was due to his giving up alcoholic drinks completely and changing his diet. He had also been doing fitness training and even running marathons. He cashed in on his weight loss by writing the book "My long race towards myself" on his experience, which became an immediate . Recently he has been putting on weight again.

The following sources reflect the views of U.S. adversaries of Fischer and his policies, especially Germany's decision not to participate in the 2003 U.S.-led invasion of Iraq.
* [http://slate.com/id/2078560 "Why Germany Isn't Convinced] " by in "Slate"
*"Power and the Idealists : Or, The Passion of Joschka Fischer, and Its Aftermath" by Paul Berman. ISBN 1-932360-91-3 (Originally appeared as a 25,000 word essay in "", September 3, 2001)
* [http://www.signandsight.com/features/380.html "The last rock 'n' roller of German politics"] In an interview with the taz given in September 2005, Fischer reflects on what his coming retirement means for his party, his country and himself. At signandsight.com

Joschka Fischer writes a monthly commentary series, "The Rebel Realist", for Project Syndicate, a non-profit association of newspapers around the world.
* [http://www.project-syndicate.org/series/38/description The Rebel Realist]