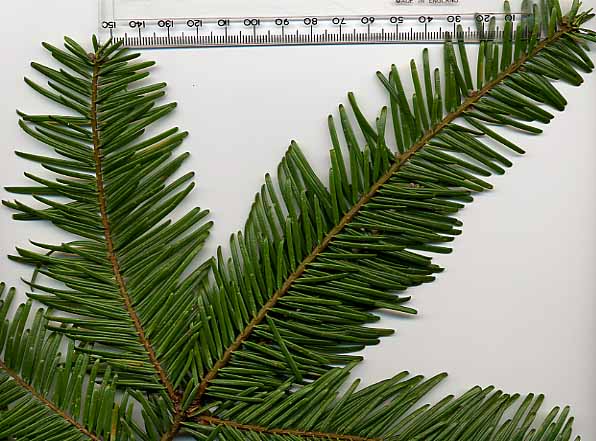 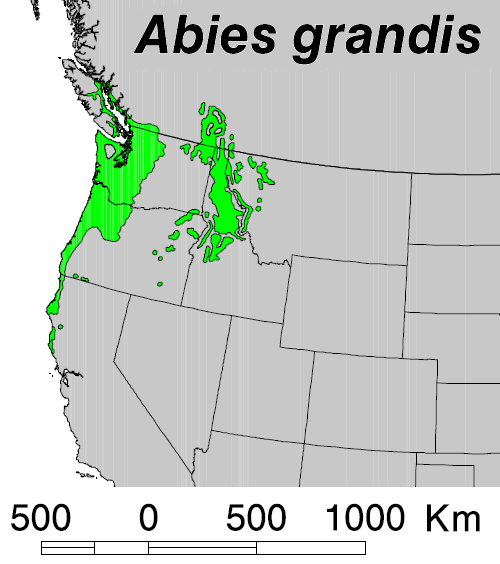 The leaves are needle-like, flattened, 3-6 cm long and 2 mm wide by 0.5 mm thick, glossy dark green above, and with two green-white bands of below, and slightly notched at the tip. The leaf arrangement is spiral on the shoot, but with each leaf variably twisted at the base so they all lie in two more-or-less flat ranks on either side of the shoot. The cones are 6-12 cm long and 3.5-4.5 cm broad, with about 100-150 scales; the scale bracts are short, and hidden in the closed cone. The winged s are released when the cones disintegrate at maturity about 6 months after pollination.

There are two varieties, probably better treated at rank though not yet formally published as such:
* "Abies grandis" var. "grandis". Coast Grand Fir. Coastal lowland forests, at sea level to 900 m altitude, from and coastal , , south to , . A large, very fast-growing tree to 70 m tall. Foliage strongly flattened on all shoots. Cones slightly narrower (mostly less than 4 cm broad), with thinner, fairly flexible scales. Tolerates winter s down to about -25° to -30°C; growth on good sites may exceed 1.5 m per year when young.
* "Abies grandis" var. "idahoensis". Interior Grand Fir. Interior forests, at (600-) 900-1800 m altitude, on the east slope of the in and northern and in the from southeast south to central , northeast and western . A smaller, slow-growing tree to 40-45 m tall. Foliage not strongly flattened on all shoots, the leaves often raised above the shoot, particularly on upper crown shoots. Cones slightly stouter (mostly over 4 cm broad), with thicker, slightly woody scales. Tolerates winter temperatures down to about -40°C; growth on good sites not exceeding 0.6 m per year even when young.

Grand Fir is very closely related to , with the interior variety "idahoensis" particularly similar to the western forms of White Fir from western Oregon and California, intergrading with it where they meet in the Cascades of central Oregon.

Grand Fir is soft and not very strong; it is used for making, packing crates and other cheap construction work. The foliage has an attractive scent, and is sometimes used for decoration, including s. It is also planted as an ornamental tree in large parks.