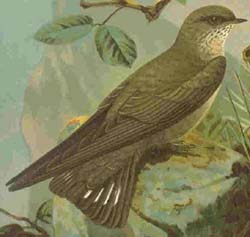 "Ptyonoprogne" is a genus of small s in the family. It contains three species, which, in taxonomic order, are:

These are species of craggy mountainous habitats, although all three will also frequent human habitation. The n Rock Martin and the south n Dusky Crag Martin are resident, but the Crag Martin is a partial migrant; birds breeding in southern are largely resident, but some northern breeders and most Asian birds are migratory, wintering in north Africa or .

The three "Ptyonoprogne" species are small swallows with brown upperparts, paler underparts without a breast band, and a square tail with white patches. They can be distinguished on size, the colour shade of the upperparts and underparts, and minor plumage details like throat colour. They resemble the , but are darker below, and lack a breast band.

These martins are similar in habits and appearance to other aerial s, The flight is fast and agile, and they swoop on the s on which they feed while airborne. The broad pointed wings and white "windows" on the spread tail are easily seen on the flying bird.

These species build neat nests lined with mud collected in their beaks. They nest under cliff overhangs or in crevices in their mountain homes, but have readily adapted to the artificial cliffs provided by buildings and motorway bridges. They do not normally form large breeding colonies, but are gregarious outside the breeding season.

These three species have formerly been considered conspecific. The genus "Ptyonoprogne" is often subsumed into the larger swallow genus "".