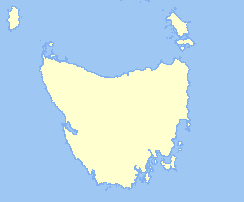 Freycinet is a national park on the east coast of (), 125 km northeast of Hobart. It occupies a large part of the , which was named after French navigator and .The closest town to the national park is that of , though the largest close town is Swansea. Freycinet contains part of the rugged Tasmanian coastline and includes the secluded Wineglass Bay, voted by several travel authorities as one of the world's ten best beaches. Famous features of the park include its red and pink granite formations and a series of jagged granite peaks in a line, called "." Founded in 1916, Freycinet is Tasmania's oldest park, along with Mt Field National Park.Within the park owns and operates Freycinet Lodge.

The park receives on average 600 mm (23.6in.) of rainfall per year. It has a climate similar to that of France, with on average, more than 300 days of sunshine.