In the fictional Gundam anime metaseries, space colonies play a pivotal role in ever-changing stories. Below is an explanation of the colonies in each of the Gundam timelines. 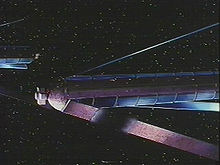 In the Universal Century (U.C.) timeline, space colonies are placed at the five Earth-Moon Lagrangian points. In most cases, a Lagrangian point is home to more than one group of space colonies. Individual colony pairs are known as Bunches, and a group of colonies that occupy a Lagrangian point are known collectively as a Side. Because Sides sometimes share a single Lagrangian point, it is possible to have two Sides in close orbit to one another. Most colonies in the Universal Century are O'Neill "Island 3" type colony cylinders, yet a few early built Bernal sphere (Island 1) and Stanford torus colonies are still in function, but most are changed to space stations or discarded. Side 3's colonies are identical in size and shape to the Island 3 design, but doubled the habitable area by removing the large window strips of the Island 3. Instead, close-type colonies were lighted through numerous smaller windows. Following the One Year War, in which the Earth Sphere's population was reduced by more than half, close-type colonies fell out of favor, as the smaller population could easily be maintained in standard Island 3 cylinders. A unique case was the Sweetwater colony at Side 3, which was composed of a closed type fused with an open type. The design was only used once, as it proved unstable, and was simply a means for the Federation to contain Zeon refugees. Sweetwater Colony features prominently in the UC motion picture Char's Counterattack as a Neo-Zeon base.

The first 50 years of the Universal Century were spent building the various colonies and placing them at the Lagrangian points, as well as colonizing the moon. By U.C. 0050 nine billion of the 11 billion people in the Federation live in space colonies or on the moon. In U.C. 0051 the Federation froze plans for additional colony development, and in U.C. 0084 reorganized the remaining Sides into different Lagrangian Points. With the re-organization of the Sides completed, the Federation announced that the status quo would be maintained. In the latter half of the Second Universal Century the construction of new colonies was restarted.

Future Century (FC) space colonies are created as artistic representation of the culture of the sponsor nation, rather than being based on proposed real-world colony designs. For example, Neo Japan is made of four modules in the shape of the four main islands of Japan, Neo France is supported on a bouquet of roses, and Neo America is a five-point star with replicas of notable American landmarks on the surface. (G Gundam)

The colonies in the After Colony (AC) timeline (Gundam Wing/Endless Waltz) are generally based on the Stanford "Island 2" type layout, and are also located in gravitationally stable areas around the Earth. Colonies in the A.C. Timeline are identified primarily by Lagrange point, although travel time between colonies (even to L3) appears trivial.

The first colony of the AC timeline was completed in AC 001, and colonial development continued peacefully until AC 040, when the fighting on Earth spread to the colonies, many of which were uncompleted. Several of these uncompleted colonies were damaged by the resulting war. Colony funding was reduced to a trickle in AC 060, and disputes over the theft of materials in AC 070 prompted the Middle Eastern nations to step in as mediators for other nations; to help with colonial construction, they also began mining asteroids. By AC 102 Colony L1 was completed, and 15% of the Earth's population moved to the Orbital Village at L1. The rest of the colonies were completed soon thereafter, resulting in mass emigration to space. (Gundam Wing/Endless Waltz)

Space colonies in the After War timeline (and those dropped on Earth at the end of the 7th Space War) are identical to the O'Neill "Island 3" type colony cylinders seen in the Universal Century timeline. (Gundam X)

To date, this is the only Gundam calendar timeframe not to have space colonies. Most of CC's space colonies, except those on the moon, whose population eventually became known as the Moonrace, were destroyed long ago when the Moonlight Butterfly destroyed all technological remnants. The remainder left for interstellar space. (Turn A Gundam)

A small number of colonies in the Cosmic Era (CE) timeline are designed on the O'Neill Island 3 design (such as Heliopolis at L3) or the Bernal Island 1 (like Mendel at L4), however, the most common space colonies are titanic, thirty-kilometer long hourglass shaped colonies called PLANTs (Productive Location Ally on Nexus Technology), each of which has a population in excess of 240,000 Coordinators (virtually no Naturals live in the PLANTs). The PLANTs are arranged into "cities" named after the months of the year and located at and around L5. Each city has a particular group of scientific specialties (for example, Martius City specializes in aerospace technology and shipbuilding). While spaceports on the PLANTs have a zero-gravity or near zero-g environment, the cities themselves have regular Earth style gravity through methods unknown.

A military base existing in the Cosmic Era called Artemis also exists, and appears to have gravity outside of its spaceports much like the PLANTs, as demonstrated when the Archangel was allowed to dock there only for the Eurasian federation officers to briefly detain the ship and its crew by force. Artemis also possessed a shield called the Umbrella of Artemis, which was integral to the defense of the base. Artemis was severely damaged/destroyed in Year 71 of the Cosmic Era by ZAFT through the use of the stolen Gundam mobile suits.

Most Natural-occupied space colonies (the ones built on traditional designs) were destroyed early in the Bloody Valentine War by ZAFT forces, and the primary moonbase of the Earth Alliance was destroyed by the GENESIS laser at the end of the war, so virtually all of the humans living in space as of Cosmic Era 73 are Coordinators. This had disastrous consequences for the human race when the remains of the destroyed space colony Junius Seven (250,000 dead) were dropped on the Earth with the intent of causing the extinction of all Naturals (and subsequently, as the fertility of Coordinators drops off sharply with the third and subsequent generations, the extinction of the entire human race). (Gundam SEED/Gundam SEED Destiny)

The Gundam 00 timeline has very few colonies, the only known colonies being Krung Threp, operated by Celestial Being as the manufacturing and testing site for their Gundams; the Human Reform League's Quanqiu Bernal Sphere-type colony, home to the faction's Supersoldier Research facility; and a colony owned by the Union. By 2312, when the Earth Sphere Federation was founded, they had created another colony from beyond the asteroid belt.

Unfortunately, due to the creation of the A-Laws, many people, especially agents of the rebel organization Katharon, are forced to work under high gravity deep within the colonies, while their slave drivers wore suits to protect themselves. In episode 8 (second season), it further hints the Earth Sphere Federation (or the A-Laws) tend to send the people who rebel against them to the same space colonies.

It was hinted that during Celestial Being's incursion into Quanqiu that combat within the colonies is forbidden by a treaty drafted during the Solar Conflicts.

The average space colony, no matter which universe it may reside in, has a set of dimension that are measured in miles or kilometers, which easily makes the space colonies the largest (improvised) ballistic weapons ever built, and it is not uncommon to see space-borne armies (like the Principality of Zeon) capturing or commandeering the colonies to drop them on the Earth. Due to their immense size, no fleet or mobile suit weapons are able to stop them. Only giant space weapons (such as the Solar System superweapon in 0083) or specialized mobile suit weapons (such as the Twin Buster Rifle in Gundam Wing or the Satellite Cannon in Gundam X) could ever hope to damage a falling colony significantly enough to prevent large-scale terrestrial damage.

A colony drop of any sort has massive consequences for the Earth, usually drastic changes in climate and weather (such as nuclear winter) and the loss of land due to the impact. Because of the tremendous damage caused by colony drops, any type of drop operation is usually viewed as the use of a weapon of mass destruction.