Richard James David "Dickie" Attwood[1] (born 4 April 1940, Wolverhampton, Staffordshire) is a British former motor racing driver. During his career he raced for the BRM, Lotus and Cooper Formula One teams. In his whole F1 career he achieved one podium and scored a total of 11 championship points. He was also a successful sports car racing driver and won the 1970 24 Hours of Le Mans race, driving a Porsche 917.

Richard Attwood got into the motor industry as an apprentice at sports car manufacturer Jaguar. He started racing in 1960 at the wheel of a Triumph TR3. For 1961 he joined the Midlands Racing Partnership to drive for them in club-level Formula Junior events, and continued in this role until the end of 1962. In 1963 the team expanded into the international arena, and Attwood immediately grabbed motorsport headlines when he won the Monaco Grand Prix FJ support race, in a Lola Mk5a. This and other performances during the year earned him the inaugural Grovewood Award, voted for by a Guild of Motoring Writers panel.

On the back of this success, in 1964 MRP decided to step up to the Formula Two class. Attwood won in Vienna and took second places in the Pau Grand Prix, Eifelrennen and Albi Grand Prix. This was at a time when top-line Grand Prix drivers were an integral part of the F2 series; indeed, at Pau he was only beaten by reigning Formula One World Champion Jim Clark driving a full-works Lotus.

Formula One and other single-seat series

Attwood's performances in Formula 2 prompted Alfred Owen, the proprietor of BRM, to offer him an opportunity in his works Formula One team. His first outing for the team was in the non-Championship News of the World Trophy race, at Goodwood, in which he took the BRM P57 to fourth place, the first non-Lotus finisher and the only car to end on the same lap as Colin Chapman's fleet winners. Attwood's second F1 outing was in the 1964 British Grand Prix, driving BRM's experimental four wheel drive P67 model. Having been the project's test driver Attwood did manage to qualify the overweight car, albeit in last place on the grid. However, as the car was principally intended as a rolling test bed, BRM decided to withdraw the P67 prior to the race itself.

Tim Parnell signed Dickie Attwood to his privateer Reg Parnell Racing team for 1965, driving a formerly class-leading Lotus 25. Unfortunately for Attwood, by 1965 the chassis was past its best, and fitted with the BRM motor it was distinctly uncompetitive. Although generally reliable, Attwood only managed to pick up a pair of 6th-place points finishes towards the end of the season. 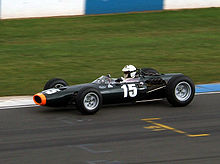 Attwood driving a BRM P261 Formula One car, identical (apart from engine capacity) to the one which he drove in the Tasman Series in 1966 and 1967.

In 1966 Attwood headed to Australia and New Zealand as a part of BRM's Tasman Series squad. His Tasman performances were very promising, including a win at Levin, but despite this – perhaps due to his underwhelming '65 F1 performances and growing success in sports cars – Attwood sat out the majority of the 1966 and 1967 F1 seasons. His only appearance came as a substitute for works-Cooper driver Pedro Rodríguez at the 1967 Canadian Grand Prix, bringing the Cooper-Maserati home in 10th place. During 1966 he maintained his run of form in F2, taking victory in the Rome Grand Prix and a second 2nd place at Pau in 1966, but concentrated firmly on sports cars in 1967.

After Mike Spence's untimely death during the 1968 Indianapolis 500 race Attwood rejoined the BRM works team, now run by Parnell, as his replacement. Attwood's first race on his return was perhaps his most spectacular, taking fastest lap in the 1968 Monaco Grand Prix, on his way to a strong second-place finish behind Graham Hill's works Lotus. However, results declined through the remainder of the season, and four races from the end Attwood was himself replaced by Bobby Unser.

Always something of a Monaco specialist, it was in the principality that Richard Attwood made his final Formula One start. Colin Chapman brought in the Brit as substitute for the injured Jochen Rindt, driving the Lotus 49B. He finished in a respectable fourth-place. Although this was his last F1 drive, he did appear at the 1969 German Grand Prix in an F2 Brabham for Frank Williams, where he finished 6th overall, and second in the F2 class.

In 1964, as Attwood was taking his first steps in Formula One, he was also approached by the Ford GT prototype project team, later to evolve into the Ford GT40, and became one of the first drivers to take the iconic car onto a race track. He shared a GT40 with Jo Schlesser in the 1964 24 Hours of Le Mans, but was forced to retire due to the car catching fire. His first major international sports car victory came at the 1964 Rand 9 Hours race in South Africa, driving David Piper's Ferrari P2.

Richard Attwood driving the open, spyder version of the Ford GT, at the Nürburgring in 1965.

It was with David Piper that Dickie Attwood developed perhaps his longest lasting professional relationship. He drove Piper's green Ferraris – including the 250LM and 330P3/4 – on many occasions over the following five years, collecting a few point finishes in World Sportscar Championship events, and paired up with Piper for the Maranello Concessionaires team. Highlights during this time included a 3rd place in the Spa 1000 km and 2nd in the 500km Zeltweg in 1967. Attwood did not restrict himself to Ferrari and Ford though, putting in drives in machinery as diverse as the Porsche 906 and Alfa Romeo T33. He was also one of the few drivers to race the infamous Ford P68, GT successor to the GT40, failing to finish due to mechanical maladies during the 1968 1000km Nürburgring.

Having driven privateer Porsches, for the 1969 World Sportscar Championship season Dickie Attwood was signed to the Porsche works team. Commonly paired with fellow Brit Vic Elford, the season's highlights were a pair of second places, driving the Porsche 908, in the BOAC 500 (the drivers' home race at Brands Hatch) and the Watkins Glen 6h race. Later in the season Attwood was again involved in the development of an iconic sports racing car: the Porsche 917. The Elford/Attwood pairing took their 917LH up to 327 laps in the 1969 24 Hours of Le Mans, but the car suffered a gearbox failure with only two hours to go, after leading for a substantial portion of the race. 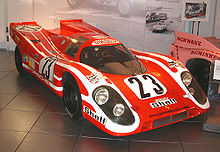 The Porsche 917K driven to victory in the 1970 24 Hours of Le Mans by Dickie Attwood and Hans Herrmann.

Attwood subsequently went on to win the Le Mans 24 Hours in 1970 with a Porsche 917K, along with Hans Herrmann. Hermann and Attwood also took second place in the 1970 Nürburgring race, this time back in a 908. Driving with Herbie Müller once more in a Porsche 917 he finished second in the 1971 24 Hours of Le Mans, this time for the John Wyer privateer team. At the end of the season, after also winning the 1000km Zeltweg race, Attwood retired from motorsport.

Richard Attwood came out of retirement briefly in 1984, as a part of the moribund Aston Martin Nimrod Le Mans project. Following his car's failure to finish in the 1984 24 Hours of Le Mans race, Attwood retired from front line racing for good. With the growth in popularity of historic motorsport, he frequently appeared in events and Porsche shows with his own Porsche 917, which Steve McQueen used in his film Le Mans. The car was painted to represent his 1970 Le Mans-winner, and Attwood referred to it as "my pension,[citation needed] as the value of the car had risen rapidly over the decades since he bought it in the 1970s. In 2000 Atwood cashed-in his pension, when he sold the car in an auction for £1 million.[citation needed] Today he is still very active in historic motorsport, often making memorable appearances at the Goodwood Festival of Speed, among many yearly excursions.