Crystal ball
This article is about the fortune telling object. For other uses, see Crystal ball (disambiguation). 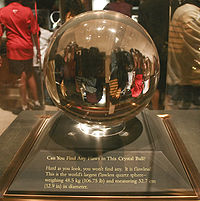 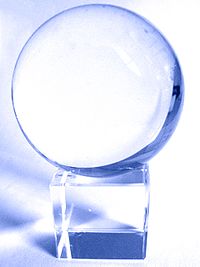 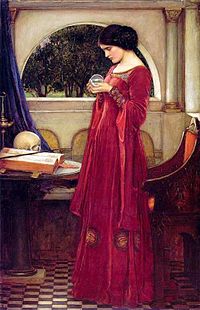 "The Crystal Ball" by John William Waterhouse: scrying in crystal

A crystal ball is a crystal or glass ball believed by some people to aid in the performance of clairvoyance. It is sometimes known as a shew stone. A body of water, either in a container or on the ground, used for this purpose, is called a scrying pool.

Celtic tribes, known to exist in Britain as early as 2000 BC, were unified by a priesthood known as Druids. Druids are one of the earliest known peoples to have used crystals in divination. It is interesting to note that Druid religion had similarities to megalithic religion of an earlier Britain, thus it is possible the first use of crystal divination might have come from them.[citation needed]

Later, during central Europe's medieval period (AD 500–1500), seers, wizards, sorcerers, psychics, gypsies, fortune tellers, and all other types of diviners also used crystals to "see" into the past, present, or future.[citation needed]

Due to its transparent nature, a natural gemstone called beryllium aluminum silicate (beryl) was often used for divination. Scottish Highlanders termed these objects "stones of power." Though early crystal balls were made from beryl, they were later replaced by rock crystal, an even more transparent rock.

The art or process of "seeing" is known as "scrying," whereby images are seen in crystals, or other mediums such as water, and are interpreted as meaningful information. The "information" gleaned then is used to make important decisions in one's life (i.e. love, marriage, finances, travel, business, etc).[1]

By contrast, some professed seers say that they do not actually see images in the crystal itself, but rather that the featureless interior of the stone facilitates them in clearing their mind of distractions so that future truths or events will become known to them.[2]

When the technique of scrying is used with crystals, or any transparent body, it is known as crystallomancy or crystal gazing.

Dr. John Dee (July 13, 1527 – 1608 or 1609) was a noted British mathematician, astronomer, astrologer, geographer, and consultant to Queen Elizabeth I. He also devoted much of his life to alchemy, divination, and Hermetic philosophy. He was known for his use of crystal balls in his work.

Crystal balls are popular props used in mentalism acts by stage magicians. Such routines, in which the performer answers audience questions by means of various ruses, are known as "C. G." (Crystal Gazing) acts. One of the most famous C. G. performers of the 20th century, Claude Alexander, was often billed as "Alexander the Crystal Seer."

This effect is used in the Campbell–Stokes recorder to record the brightness of sunlight by burning the surface of a piece of cardboard placed near the sphere. The same effect can occur with a crystal ball that is brought into full sunlight; it may either burn a hand that is holding it, or even start a fire if it is resting on or very close to dark coloured flammable material.[3] Consequently, such a ball should always be covered before being taken outdoors on a sunny day, and should not be left uncovered near a window.