Maurice of Nassau, Prince of Orange

Maurice of Nassau, Prince of Orange

Maurice of Nassau, Prince of Orange (Dutch: Maurits van Nassau) (14 November 1567, Dillenburg – 23 April 1625) was sovereign Prince of Orange from 1618, on the death of his eldest half brother, Philip William, Prince of Orange, (1554–1618). Maurice was stadtholder of the United Provinces of the Netherlands from earliest 1585 until his death in 1625.

Maurice was a son of William the Silent and Princess Anna of Saxony and was born at the castle of Dillenburg. He was named after his maternal grandfather, the Elector Maurice of Saxony, who was also a noted general.

Maurice never married but was the father of illegitimate children by Margaretha van Mechelen (including Willem of Nassau, lord of the Lek and Louis of Nassau, lord of den Lek and Beverweerd) and Anna van de Kelder. He was raised in Dillenburg by his uncle Johan of Nassau (Jan the Old).

Together with his cousin Willem Lodewijk he studied in Heidelberg and later with his eldest half brother Philip William, Prince of Orange in Leiden where he met Simon Stevin. The States of Holland and Zeeland paid for his studies, as their father had run into financial problems after spending his entire fortune in the early stages of the Dutch revolt. 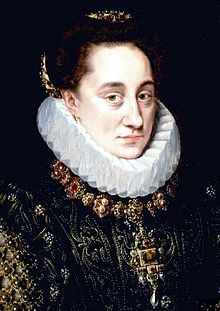 Maria of Nassau, (1556 -1616), full sister of Philip William, Prince of Orange, half-sister of Maurice of Nassau

Only 16 when his father was murdered in Delft in 1584, he soon took over as stadtholder (Stadhouder), though this title was not inheritable. The monarchs of England and France had been requested to accept sovereignty, but had refused. This had left Maurice as the only acceptable candidate for the position of Stadtholder. He became stadtholder of Holland and Zeeland in 1585, of Guelders, Overijssel and Utrecht in 1590 and of Groningen and Drenthe in 1620 (following the death of Willem Lodewijk, who had been Stadtholder there and in Friesland).

Protestant Maurice was preceded as Prince of Orange (not a Dutch title) by his Roman Catholic eldest half-brother Philip William, Prince of Orange, deceased 1618. However, Philip William was in the custody of Spain, remaining so until 1596, and was thus unable to lead the Dutch independence cause. 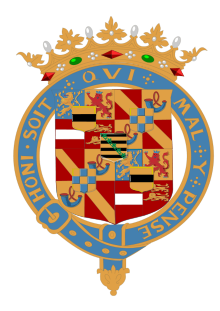 Maria of Nassau (1556–1616), was a full sister of Philip William from the first marriage of William I, Prince of Orange, (assassinated 1584), to wealthy and powerful aristocrat Anna van Egmont, (1533–1558), and a furious contender to Maurice of Nassau.

He was appointed captain-general of the army in 1587, bypassing the Earl of Leicester, who returned to England on hearing these news.

Maurice organized the rebellion against Spain into a coherent, successful revolt. He reorganised the Dutch States Army together with Willem Lodewijk, studied military history, strategy and tactics, mathematics and astronomy, and proved himself to be among the best strategists of his age. The Eighty Years' War was a challenge to his style, so he could prove himself a good leader by taking several Spanish Outposts. Paying special attention to the siege theories of Simon Stevin, he took valuable key fortresses and towns: Breda in 1590, Steenwijk in 1592, and Geertruidenberg in 1593. These victories rounded out the borders to the Dutch Republic, solidifying the revolt and allowing a national state to develop behind secure borders. They also established Maurice as the foremost general of his time. Many of the great generals of the succeeding generation, including his brother Frederick Henry and many of the commanders of the English Civil War learned their trade under his command.

His victories in the cavalry battles at Turnhout (1597) and at Nieuwpoort (1600) earned him military fame and acknowledgment throughout Europe. Despite these successes, the House of Orange did not attain great respect among European Royalty, as the Stadtholdership was not inheritable.

The training of his army is especially important to early modern warfare. Previous generals had made use of drill and exercise in order to instill discipline or to keep the men physically fit, but for Maurice, they "were the fundamental postulates of tactics."[4] This change affected the entire conduct of warfare, since it required the officers to train men in addition to leading them, decreased the size of the basic infantry unit for functional purposes since more specific orders had to be given in battle, and the decrease in herd behavior required more initiative and intelligence from the average soldier.[5]

As part of his efforts to find allies against Spain, Maurice received Moroccan envoys such as Al-Hajari. They discussed about the possibility of an alliance between Holland, the Ottoman Empire, Morocco and the Moriscos, against the common enemy Spain.[6][7] Al-Hajari's account mentions in detail the discussion for a combined offensive on Spain.[8] 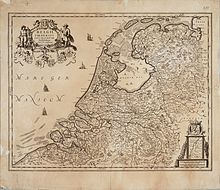 The Seven United Provinces known as Netherlands, protagonists of the Eighty years war against Spain from a 1658 map by Janssonius

Maurice started out as the protégé of Landsadvocaat (Land's Advocate, a kind of secretary) Johan van Oldenbarnevelt. But gradually tensions rose between these two men. Against Maurice's advice, and despite his protests, Van Oldenbarnevelt decided to sign the Twelve Years' Truce with Spain, which lasted from 1609–1621. The required funds to maintain the army and navy, and the general course of the war were other topics of constant struggle.

With the religious troubles between Gomarists (Calvinists) and Arminians, the struggle between Van Oldenbarnevelt and Maurice reached a climax. Van Oldenbarnevelt was arrested, tried and decapitated despite numerous requests for mercy. From 1618 till his death Maurice now enjoyed uncontested power over the Republic. He expanded the Stadthouderlijk palace at the Binnenhof in the Hague. The Maurice Tower is nowadays part of the building complex of the Senate of the Netherlands.

Maurice urged his cadet half brother, Frederick Henry to marry in order to preserve the dynasty.

In 1621 the war resumed, after a 12-year period of truces, and the Spanish, led by Ambrogio Spinola, had notable successes, including the siege of Breda, the old family residence of the Nassau's, in 1625.

Maurice died on 23 April 1625, with the siege still underway. Justin of Nassau surrendered Breda in June 1625 after a costly eleven-month siege.