John Crome (December 22, 1768 – April 22, 1821) was an English landscape artist of the Romantic era, one of the principal artists of the "Norwich school". He is known as Old Crome to distinguish him from his son, John Berney Crome, who was also a well-known artist. 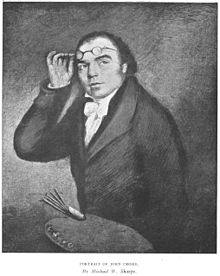 Crome was born in Norwich in Norfolk, the son of a weaver. After a period as an errand boy (from the age of 12), he was apprenticed to a Francis Whisler, house, coach and sign painter. It was about this time that he formed a friendship with Robert Ladbrooke, then an apprentice printer, who also went on to become a celebrated landscape painter. The pair shared a room together and went on sketching trips in the fields and lanes around Norwich. They also occasionally bought art prints to copy.

Crome and Ladbrooke were able to sell some of their art work to a local print-seller, "Smith and Jaggers" of Norwich. It was probably through the print-seller that John met a local man, Thomas Harvey (of Old Catton, Norfolk), through whom he was able to set up as a drawing teacher. He also had access to Harvey's art collection which allowed him to hone his skills by copying the works of masters like Gainsborough and Hobbemas. Crome received further art instruction and encouragement from notable artists Sir William Beechey R.A. and John Opie R.A.

Crome's two main influences are considered to be Dutch 17th-century painting and the work of Wilson. Along with John Constable (1776–1837), Crome was one of the earliest English artists to represent identifiable species of trees, rather than generalised forms. His works, renowned for their originality and vision, were inspired by direct observation of the natural world combined with a comprehensive study of Old Masters.

Crome went on to become the founder of the Norwich school of painters, of which John Sell Cotman is another famous member. He worked both in watercolour and oil. His oil paintings alone number in excess of 300. Many can be seen at major galleries around the world, including the Tate Gallery and the Royal Academy, but he is also very well represented in Norwich itself at the Castle Museum and Art Gallery. He also produced etchings and taught art. One of his pupils was James Stark; another was Edward Thomas Daniell.

Crome's Broad and nearby Crome's Farm, to the west of the River Ant and north of How Hill in The Broads National Park are named after "Old Crome".