Tocumen International Airport (Spanish: Aeropuerto Internacional de Tocumen) (IATA: PTY, ICAO: MPTO) is an international airport located 15 mi (24 km) from Panama City, Panama. In 2006, it underwent a major expansion and renovation program in order to modernize and improve its facilities. It is currently the only airport in Central America with two runways for use and is also the largest airport in the country and the busiest in Central America by passenger traffic.

During World War II, Panamanian airports were leased exclusively by the U.S. military. The nearest airport to Tocumen was the Paitilla Point Airfield. Several airports were built to protect the Panama Canal from foreign aggression. The 37th Pursuit Group at Albrook Field replaced the P-40 Warhawks of the 28th Pursuit Squadron at the Paitilla Point airbase from 9 December 1941 though 26 March 1942 in the immediate aftermath of the Pearl Harbor attack.

The first Tocumen International Airport was inaugurated on June 1, 1947 by President Enrique A. Jiménez, and airport operations began before the construction works were completed.

The administrative building/passenger terminal was inaugurated seven years later, during the administration of Colonel Jose Antonio Remon Cantera. The old airport, which currently is being used as a cargo terminal, was built on an area of 720 ha (1,800 acres) and was 126 ft (38 m) above sea level. As time passed, and due to Panama's role as a country of transit, that terminal became too small to attend to the growing demand for air operations. This compelled the aeronautical authorities at the time to consider expanding the airport. Work on the new installations began in 1971.

In order to build the structure that currently houses the current passenger terminal, a lot of land had to be moved and the bed of the Tocumen river had to be diverted from its original site. The current passenger terminal was inaugurated on August 15, 1978 and operations began on September 5 of the same year. The Tocumen International Airport is one of the few airports in the region that has two landing runways able to serve the largest commercial aircraft operating today.

The name of the airport was changed in 1981 by the military government for Omar Torrijos International Airport, in honor to the Panamanian leader who died in July 31, 1981, at the age of 52 in a plane crash in Cerro Marta, Coclesito in very bad conditions. After nine years, the original name was reestablished after the fall of the dictatorship of Panama by the U.S. invasion of 1989. 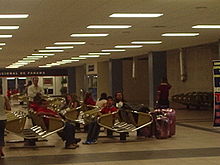 The runway of the old airport is mainly used for cargo and private flights, but also as a supplement to the runway during peak traffic periods. The main runway is 3,050 × 45 m (10,007 × 148 ft) and is used primarily for commercial flights. Until May 31, 2003 Tocumen International Airport was managed by the Civil Aeronautics Directorate (which is known today as the Civil Aeronautics Authority). On June 1 of that year, an innovative terminal management platform was created through Law No. 23 of January 29, 2003, which set out a regulatory framework for the management of airports and landing strips in Panama. This law allowed the creation of Aeropuerto Internacional de Tocumen, S.A., also referred to as Tocumen, S.A., which currently manages the terminal. This law is one of a number of laws that restructured the aeronautical sector in Panama to further its improvement and modernization.[2]

Tocumen Internation Airport is a regional hub for commercial flights heading to and from The Caribbean, South America, North America and Central America. Also, the European cities of Frankfurt, Madrid and Amsterdam are served. 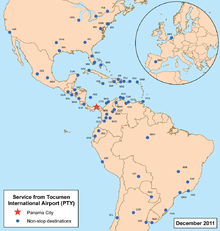 The 2006 expansion and modernization project consisted of three stages:

The main passenger terminal was expanded 20,830 m2 (224,200 sq ft) at a cost of approximately US$ 21 million. New boarding gates were built to allow more flights to and from Panama, and to facilitate the growth of commercial and internal circulation areas. 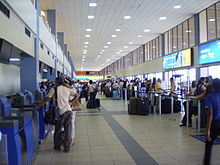 Tocumen airport administration acquired 22 new boarding bridges and replaced the oldest 14. This included the addition of 6 remote positions, hence allowing Tocumen Airport to have a total of 28 boarding gates. The new installations were opened in 2006. The airport also has two vip lounges, one United Club for Copa Airlines and Continental Airlines, and a Admirals Club for American Airlines.

The next step of the modernization project was the purchasing of new equipment to provide service and support to the common areas of the airport.

Renovation in the cargo terminal

The second expansion phase of Tocumen International airport is known as Terminal Muelle Norte. At a cost of USD 60 million, a completely new terminal with 12 additional aircraft docking positions (gates) will be built. With these 12 new gates plus the existing 22 gates and the six remote aircraft docks, there will be a total of 40 gates.

The new facilities are going to include platforms, taxiways and a new road which will connect both the cargo terminal and the airport's administration building.

Muelle Norte will be linked to the main passenger terminal and will have 10 moving walkways for passengers and 1,400 m2 (15,000 sq ft) for commercial areas.

The tender for the design of the second phase was given to Ecuador-based Planman Cia Ltda. Colombia-based Aerotocumen won the tender of the construction of the Muelle Norte. The project started in mid-October 2009 and is projected to be completed in early 2011.

Capacity will increase from 5 million to 10 million passengers per year.