Sherlock Holmes and the Voice of Terror

Sherlock Holmes and the Voice of Terror

Infobox Film
name = Sherlock Holmes and the Voice of Terror 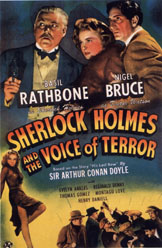 "Sherlock Holmes and the Voice of Terror" is the third film in the Basil Rathbone/Nigel Bruce series of movies. Made in 1942, the movie combines elements of the Sir Arthur Conan Doyle story "His Last Bow" and loosely parallels the real-life activities of . Horror film "scream queen" appears as leading lady.

The film begins with a title card describing Holmes and Watson as "timeless", as an explanation as to why the film is set in contemporary times, rather than Holmes' era of 1881-1914, as the preceding 20th Century Fox films were. Though there is a nod to the classic Holmes in a scene where Holmes and Watson are leaving 221b Baker Street, and Holmes picks up his . Watson protests, and Holmes reluctantly puts on a fedora instead.

Holmes is called into the "Inner Council" of British Intelligence by Sir Evan Barham (Reginald Denny), to assist in stopping Nazi saboteurs operating in Britain, whose activities are announced in advance in radio broadcasts by "The Voice of Terror".

Holmes investigates, following the trail from to a bombed-out church on the south coast. There he reveals the true identity of "The Voice of Terror" as Barham who happens to be an imposter. Holmes then reveals that in , the real Barham was a prisoner in a German war camp and had an uncanny resemblance to a Heinrich Von Bork, a member of the German Secret Service; one day the real Barham was taken out and shot, murdered in cold blood; the gentleman who called Holmes into the case was Von Bork himself who had posing as Barham for 24 years; Holmes then added that Barham had no immediate family, so his private life was well studied by Von Bork who also studied at Oxford and had knowledge of the English language and manners. So, with a little help of , not to mention the resemblance to Barham in the first place, the deception was carried thoroughly. Holmes also concludes that the real Sir Evan Barham carried a scar from childhood, the one Von Bork carried from plastic surgery was approximately 20 years old, that's how Holmes suspected the imposter.

The film ends with a direct quote from "His Last Bow":

:Watson: It's a lovely morning, Holmes.:Holmes: There's an East wind coming, Watson.:Watson: I don't think so. Looks like another warm day.:Holmes: Good old Watson. The one fixed point in a changing age. But there's an East wind coming all the same. Such a wind as never blew on England yet. It will be cold and bitter, Watson, and a good many of us may wither before its blast. But it's God's own wind none the less. And a greener, better, stronger land will be in the sunshine when the wind is cleared. [Davies, David Stuart, "Holmes of the Movies" (New English Library, 1976) ISBN 450 03358 9]