Emperor Nintoku (仁徳天皇, Nintoku-tennō?) was the 16th emperor of Japan,[1] according to the traditional order of succession.[2]

No firm dates can be assigned to this emperor's life or reign, but he is conventionally considered to have reigned from 313–399.[3]

Nintoku is considered to have ruled the country during the late-fourth century and early-fifth century, but there is a paucity of information about him. There is insufficient material available for further verification and study.

According to Nihon Shoki, he was the fourth son of Emperor Ōjin and his mother was Nakatsuhime no Mikoto, a great-granddaughter of Emperor Keikō. He was also the father of Emperors Richū, Hanzei, and Ingyō.

Nintoku's contemporary title would not have been tennō, as most historians believe this title was not introduced until the reigns of Emperor Tenmu and Empress Jitō. Rather, it was presumably Sumeramikoto or Amenoshita Shiroshimesu Ōkimi (治天下大王), meaning "the great king who rules all under heaven." Alternatively, Nintoku might have been referred to as (ヤマト大王/大君) or the "Great King of Yamato."

Although the Nihon Shoki states that Nintoku ruled from 313–399, modern research suggests those dates are likely inaccurate.[4]

The achievements of Nintoku's reign which are noted in Nihon Shoki include: 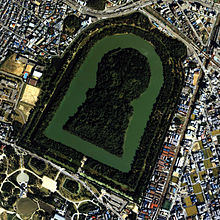 Daisen-Kofun (the biggest tomb in Japan) in Sakai, Osaka is considered to be his final resting place. The actual site of Nintoku's grave is not known.[1]

The Imperial tomb of Nintoku's consort, Iwa-no hime no Mikoto, is said to be located in Saki-cho, Nara City.[6] Both kofun-type Imperial tombs are characterized by a keyhole-shaped island located within a wide, water-filled moat. Imperial tombs and mausolea are cultural properties; but they are guarded and administered by the Imperial Household Agency (IHA), which is the government department responsible for all matters relating to the emperor and his family. According to the IHA, the tombs are more than a mere repository for historical artifacts; they are sacred religious sites. IHA construes each of the Imperial grave sites as sanctuaries for the spirits of the ancestors of the Imperial House.[4]

Nintoku is traditionally venerated at a memorial Shinto shrine (misasagi) at Osaka. The Imperial Household Agency designates this location as his mausoleum. It is formally named Mozu no Mimihara no naka no misasagi.[7]

The direct descendants of Emperor Ōjin's eldest son, Nintoku, will come to an end with the death of childless Emperor Buretsu.