The Skin of Our Teeth

The Skin of Our Teeth

Infobox Play
name = The Skin of Our Teeth 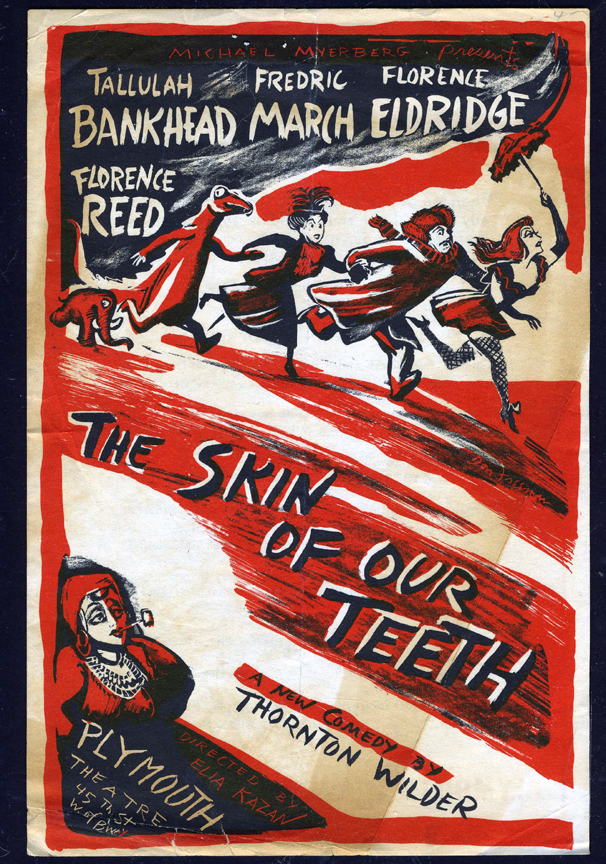 "The Skin of Our Teeth" is a play by which won the . It opened on , at the Shubert Theatre in , before moving to the on Broadway on , . It was produced by and directed by .

The leading role of Sabina was originated by ; when she left the production in March 1943, she was replaced by . Hopkins was in turn replaced by . For two performances, while George was ill, , who had been Bankhead's , was called in to play the role.

The main characters of the play are George and Maggie Antrobus (from _el. άνθρωπος, "human" or "person"), their two children, Henry and Gladys, and Sabina, who appears as the family's maid in the first and third acts, and as a beauty queen temptress in the second act. The play's action takes place in a modern setting, but is full of anachronisms reaching back to prehistoric times. The characters' roles as s are emphasized by their identification with Biblical and classical personalities (see below).

For example, the name Sabina is a direct reference to the s and the historical rape of the Sabine women, an identification made explicit at one stage in the play's text. Henry Antrobus's name was changed from "Cain", following his murder of his brother Abel. This is a story from the Bible, in which , the son of Adam, murders his brother after God favours Abel over Cain regarding gifts. This implies that George Antrobus is Adam, and Maggie Antrobus Eve, further supported by an event at the beginning of the play when Mr. Antrobus composes a song for his wife in honour of their anniversary, in which the lyrics: "Happy w'dding ann'vers'ry dear Eva" appear, though Mrs. Antrobus is referred to as Maggie throughout the play.

The murder of Abel is an underlying theme in the play, Mr. Antrobus pays far more attention to his "perfect" third child Gladys than he does Henry, because of the murder of his favourite child. As this treatment of Henry continues, throughout the acts is seen progression of Henry slowly becoming more angry with his family, which reaches its climax in the third act.

While the Antrobus family remains constant throughout the play, the three acts do not form a continuous narrative. The first act takes place during an impending , in the second act the family circumstances have changed as George becomes president of the Fraternal Order of Mammals and the end of the world approaches a second time, and the third act opens with Maggie and Gladys emerging from a bunker at the end of a seven-year-long war.

An additional layer of complexity is added to the structure of the play by the occasional interruption of the scene by "the actor" directly addressing the audience.fact|date=March 2008 In the first scene, the actress playing Sabina reveals her misgivings about the play, in the second act she refuses to say lines in the play and tells the audience things that causes a woman in the audience to run from the theatre sobbing, and in the third scene, the "stage manager" of the play interrupts to announce that several actors have taken ill.

unreferencedsection|date=March 2008
* History always repeats itself, we as a human race essentially never get anywhere, never learn from our mistakes, time is a continuous and jumbled thing that is always the same, although the scenarios change, the realities of everyday life remain the same.
*The play ends and begins in the same way.
* As Sabina says, "That's all we do&mdash;always beginning again! Over and over again. Always beginning again." After each disaster, they just rebuild the world again. She also says: "Don't forget that a few years ago we came through the depression by the skin of our teeth! One more tight squeeze like that and where will we be?"
* The Ice Age/The Great Flood; we are always plagued by the same things, in this case, lots of water
* Art and literature are one way of moving forward as a people.
* Technology doesn't necessarily advance the human race.

Act one is an amalgam of early 20th century and the dawn of the . The father is inventing things such as the , the , the , and . The family (the Antrobuses) and the entire north-eastern U.S. face extinction by a wall of ice moving southward from Canada. The story is introduced by a narrator and further expanded by the family maid, Sabina. There are unsettling parallels between the members of the Antrobus family and various characters from the Bible. In addition, time is compressed and scrambled to such an extent that the refugees who arrive at the Antrobus house seeking food and fire include the judge , the ancient Greek poet , and women who are identified as s.

Act II takes place on the at , where the Antrobuses are present for George's swearing-in as president of the Ancient and Honourable Order of Mammals, Subdivision Humans. Sabina is present, also, in the guise of a scheming beauty queen, who tries to steal George's affection from his wife and family. Although the conventioneers are rowdy and partying furiously, there is an undercurrent of foreboding, since the weather signals change from summery sunshine to hurricane to deluge. (A fortune teller had previously attempted to warn them about this but had been ignored). Gladys and George each attempt their individual rebellions, and are brought back into line by the family. The act ends with the family members reconciled and, paralleling the Bibilical story of , directing pairs of animals to safety on a large boat where they survive the storm and/or the end of the world.

The final act takes place in the ruins of the Antrobuses' former home. A devastating war has occurred; Maggie and Gladys have survived by hiding in a cellar. When they come out of the cellar we see that Gladys has a baby. George has been away at the front lines leading an army. Henry also fought, on the opposite side, and returns as a . The family members discuss the ability of the to rebuild and continue after continually destroying itself. The question is raised, 'is there any accomplishment or attribute of the human race of enough value that its civilization should be rebuilt'?

The interrupts the play-within-the-play to explain that several members of their company can't do their parts because they're sick (possibly with food poisoning: the actress playing Sabina claims she saw blue mold on the lemon meringue pie at dinner). The stage manager drafts a janitor, a dresser, and other non-actors to fill their parts, which involve quoting philosophers such as and to mark the passing of time within the play.

The action ends where it began, with Sabina dusting the living room and worrying about George's arrival from the office. Her final act is to address the audience and turn over the responsibility of continuing the action, or life, to them.

Similarities between the play and the "" were noted in the "Saturday Review" during the play's run on Broadway. , editor of the "Review," printed a short article by and titled "The Skin of Whose Teeth? The Strange Case of Mr. Wilder's New Play and "Finnegan's Wake" in the issue for , , with a second part in the , issue. [Campbell, Joseph. "Mythic Worlds, Modern Worlds: On the Art of James Joyce." New World Library, 2004; pp. 257-69.]