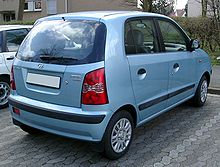 The Hyundai Atos (also known as Atoz, Amica and Santro Xing) is a city car produced by Hyundai. The original Atos was introduced in 1997. In 1999, it was joined by the less controversially styled Atos Prime. It uses the G4HC Epsilon straight-4 engine. The second generation Atos Prime was launched in 2004. It comes with a 1086 cc G4HG engine.

The Atos Prime is marketed as the:

The original Atos was sold under the Hyundai brand but rebadged as the Atoz (or "AtoZ") in some markets, including the United Kingdom. The Hyundai Santro is a rebadged version of the city car Hyundai Atos sold in some Asian markets.

Hyundai entered the Indian market in 1997 with the Atos, marketed under the name Santro. Produced at Hyundai's factory in Chennai, its primary competitor at the time was the popular Maruti Suzuki Zen. The distinctive styling of the first generation had mixed reviews, but the car was a success primarily due to its features and price.

In the years since, the Indian version has undergone a number of upgrades in styling and technology to respond to consumer preferences. In 2003, the first generation was replaced with the second generation Atos Prime, marketed in India as the Santro Xing, which continued to enjoy sales success. The car is also exported from India in large volumes to the Asia and Oceania region.

The Santro was launched in Pakistan in 2000. As of December 2009, Pakistan is the only country where the first generation Atos is still being sold and the model has received no upgrades.

In Malaysia, Hyundai Atos is locally assembled by Inokom carrying the badge Inokom Atos. The Inokom Atos Prima was later introduced in 2006 which has the new Atos Prime front while maintaining the original Atos rear.

Hyundai unveiled at the 1997 Frankfurt Motor Show an electric vehicle based on the Atos, the Atos EV. The Atos EV weights 2,585 lb (1,173 kg), including the battery pack, which holds 24 nickel metal hydride (Ni-MH) batteries. An on-board 6.6 kW conductive charger can fully recharge the Ni-MH batteries in seven hours. The Atos EV can travel more than 120 miles (193 km) in stop and go city driving and can reach a top speed of 80 mph (130 km/h).[2]