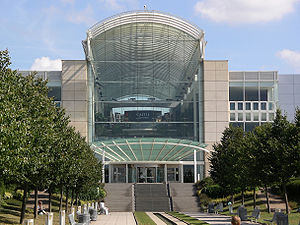 The Mall, Cribbs Causeway - central atrium from the south

The road runs from the northern edge of Bristol at Henbury to a point just beyond the M5 junction 17. It now forms parts of the A4018 and B4055. The primary access routes to the shopping centre are the A4018 from Bristol, the M5 motorway and the Patchway bypass road.

The name of the road is often said to owe its name to Tom Cribb, a famous bare-knuckle boxer from the Bristol area. However, this was proved wrong in the 1960s by the discovery of a map showing the current name dated to four years prior to his 1781 birth.[1] The book's author goes on to speculate that the true origin of the name may be from Crybe's dwelling (Crybe being a personal name), or from crib – a manger or hovel. But all that we can truly glean from this is that the causeway - i.e. the Roman road - was named for a family with the surname Cribb (which may or may not have been closely related to the boxer's family: he was from Hanham on the opposite side of Bristol). This local family was probably also commemorated in the smallholding called Crybescroft which existed in Henbury in 1281.[2]

Cribbs Causeway is believed to be the route of a Roman road from Sea Mills to Gloucester.[3] It later became the route of a turnpike from Bristol to New Passage. In the 20th century it was part of the main road from Bristol to the Aust Ferry, until the Severn Bridge opened in 1966. In the early 1960s it was upgraded to an A road (the A4018), and linked with the New Filton Bypass to the A38 north of Patchway. In 1971 the New Filton Bypass was incorporated into the M5 motorway, and the motorway junction transformed the area. In 1976 Carrefour was granted planning permission to build a hypermarket (now the Asda store) near the junction.[4] Development of retail parks followed, and in 1998 the Mall was opened.

The Mall comprises 135 shops on two levels, although some of the large stores occupy more levels. The major businesses are John Lewis, Marks & Spencer, W H Smith and Boots. At its centre point The Mall has a large fountain with a water display. Money thrown into the fountain is donated to local charities, the company reports it raises in excess of £10,000 a year for local charities.[5] Above the fountain is the food court.

To celebrate the Mall's ten year anniversary, the company announced a five million pound refurbishment of the food court that will be completed in two stages with completion in May 2009.[6] The food court will be renamed 'The Avenue'.

The primary access routes are the M5 Junction 17 and the Patchway bypass road. The Mall is one of the major shopping centres in the Bristol area, the other being Broadmead, the location of The Mall Bristol and Cabot Circus.

It should not be confused with shopping centres owned by The Mall Fund which are branded as The Mall and then the town or city name, The Mall Bristol is an example of a shopping centre owned by that company.

The two retail parks are warehouse style shops with entrances from outside. The first retail park is a group of large shops containing shops such as Argos, Currys, and Comet.

Other shops include the United Kingdom's first ASDA-Wal-Mart Supercentre, the first Morrisons supermarket in the south of England which opened in September 2003, Wickes, Toys "R" Us, Makro and DFS, also car dealers, warehouses, pubs and hotels. In a lane that passes under the motorway, is the Cribbs Business Centre.

A B&Q Warehouse is now completed on the site previously owned by Tile World and Magnet. It is situated near the Morrisons supermarket. It also houses a Furniture Village.

The Mall has over 7000 parking spaces spread over a car park that is divided into different sections, and which is free to use. There are also large car parks at the retail parks.

The station is situated at The Mall and has 15 stands. The main operators that serve the bus station are First (Bristol and Somerset & Avon) and Wessex Connect.

The bus station (the terminal for many bus routes) which is served by a considerable amount of bus services operating in Bristol, South Gloucestershire and Wales.

Buses run from the bus station around the Bristol area and as far afield as Weston Super Mare, Bath and Cwmbran.