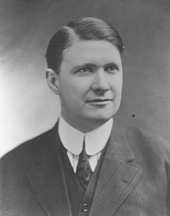 Lea was the great-grandson of an earlier Luke Lea who was a two-term Congressman from Tennessee in the 1830s and initially an ardent supporter of who later became a Whig.

The younger Lea attended s and then the in , graduating from that institution in 1899. He then attended the in , completing his studies at that prestigious institution in 1903 and being admitted to the bar the same year, beginning practice in Nashville.

Lea was the founder of the "Nashville Tennessean" and its first editor and . He was elected to the Senate by the in 1911. He was an enthusiastic supporter of most of the progressive policies of Democratic President , a fellow native of the South and only the second member of the Democratic Party to have been elected President since the end of the Civil War until that point, whose service began in 1913 following his election in 1912. During the 63rd Congress, Lea was chairman of the Senate Committee on the Library (of Congress).

Socially progressive, but fiscally solvent, Lea actively supported lowering the tariff, the creation of the Federal Reserve, the regulation of major corporations and the breaking up of trusts. He also supported women's suffrage and a national prohibition amendment. He allied with and supported his seaman's act. He approved of the eight-hour day and opposed child labor. [Tidwell, 56-58.]

During Lea's term, the Seventeenth Amendment changed the method of election of Senators from that of election by the state legislatures to a direct popular vote. Lea supported this measure. Lea contended for the 1916 Democratic nomination for the seat but was defeated by , a colleague of Memphis political "boss" , who went on to serve six terms as Tennessee's longest-serving senator. Despite his lame duck status, Lea continued to work on the progressive agenda. He voted to confirm to the Supreme Court, and supported a number of progressive measures in the Senate including immigration reform, the Shipping Act of 1916, and the Revenue Act of 1916. [Tidwell, 74-75.]

Shortly after the expiry of Lea's Senate term the U.S. entered . Lea volunteered and was commissioned as an officer, serving in , where he was promoted to the rank of . In January 1919, Lea and a group of officers from his unit, the U.S. 114th Field Artillery, traveled to Kasteel in the in a failed attempt to seize the recently exiled German and bring to the Paris Peace Conference for potential trial for . One of the officers accompanying Lea was , later the part-owner and general manager of the , and and father of baseball executive .

After the close of the war, Lea returned to Nashville and resumed operation of his . In 1929 Lea was nominated for appointment by to Tennessee's other Senate seat, vacated by the death of Senator who had been one of Lea's colleagues in the U.S. 30th Division during . Lea, however, declined this appointment, choosing instead to enter the ing and businesses in an era when the speculative nature of the practices in those industries was about to contribute to the . In the 1920s, Lea was a major investor in and backer of the Nashville investment banking firm of Caldwell & Company, due in part to his friendship with its founder . Many accusations were subsequently made about Lea and his friends, and he became the subject of much rumor and innuendo. The book "" by poet and ist is said to be a "roman à clef" about the events of this era in the Nashville area, as are aspects of the novel "" by the ist .

Lea was indicted with others, including his eldest son, in for bank fraud resulting from the 1930 collapse of the Central Bank and Trust Company of Asheville, North Carolina, a bank with which he had become affiliated through his connection with Caldwell & Company. Both Lea and his son were tried in North Carolina in 1931, and the Leas were convicted on three of seven counts. After the Leas’ appeals were exhausted and after the denied their for the of , both Leas reported for imprisonment at Raleigh in May 1934. Lea received a in April 1936, and he received a full in June 1937. To the end of his life, Lea maintained that he and his son were wrongly prosecuted and convicted and that the prosecution was political in nature, with Lea being made the scapegoat for the Central Bank and Trust’s failure by his Republican foes in North Carolina and Tennessee.

Lea made many efforts to reintegrate himself into Tennessee business and political life after his release, but his interests in his newspapers and other investments had been liquidated or placed into receivership during his imprisonment. Lea died in Nashville in 1945 at the age of 66 and is buried in that city's Mount Olivet Cemetery, the final resting place of several Tennessee governors and senators.

Lea Heights in Nashville's , a place offering an excellent view of the Nashville skyline, is named in his honor. The original land grant establishing was donated by Lea and his family to Nashville, and the park is named for Lea's father-in-law.