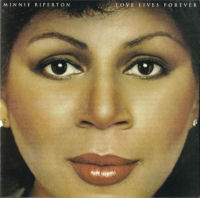 "Love Lives Forever" is the last studio album released by American soul singer . Released posthumously, it was coproduced by her husband and was released on her then-label . It consists of unused vocal sessions, put in music and vocally completed by artists she admired or with whom she shared her musical style. The song "Here We Go" was released as a single and hit the Top Twenty.The back cover features a quote of each artist who participated, about Minnie Riperton, and their signature (being a thumbprint for Stevie Wonder).