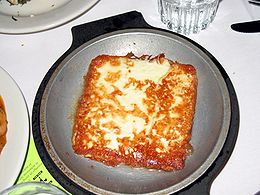 Saganaki (Greek σαγανάκι, literally little frying pan) refers to various dishes prepared in Greek cuisine and is named after the single-serving frying pan in which it is cooked.

One popular example is an appetizer of pan-seared cheese. The cheese used in saganaki cheese is usually kefalograviera, kasseri, kefalotyri, or sheep's milk feta cheese. Regional variations include the use of formaella cheese in Arachova and halloumi cheese in Cyprus. The cheese is melted in a small frying pan until it is bubbling and generally served with lemon juice and pepper. It is eaten with bread.

In many United States, Canadian and Australian restaurants, after being fried, the saganaki cheese is flambéed at the table (typically with a shout of "opa!"), and the flames then extinguished with a squeeze of fresh lemon juice. This is called "flaming saganaki" and apparently originated in 1968 at The Parthenon restaurant in Chicago's Greektown,[1][2][3] based on the suggestion of a customer to owner Chris Liakouras.[4]

The word saganaki is a diminutive of sagani, a frying pan with two handles, which comes from the Turkish word sahan 'copper dish'.[5] The Turkish word itself is borrowed from the Arabic صحن (ṣaḥn).