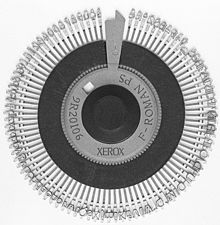 The Diablo 630 was a daisy wheel printer (computer printer) sold by the Diablo Data Systems division of the Xerox Corporation from 1980.[1] The printer was capable of letter-quality printing; that is, its print quality was equivalent to the quality of an IBM Selectric typewriter, Selectric-based printer, or similar quality printer. The printer was capable of this quality at a nominal speed of 30 characters per second (roughly twice the speed of the Selectric).

A related model, the Diablo 1620, included a keyboard and strongly resembled a slightly overgrown Selectric typewriter. It in fact could be used as either an offline typewriter or as an interactive computer terminal. Unfortunately for a typist, the daisy wheel mechanism hides the area just printed. Firmware in the machine would therefore make the carriage move quickly to the right of the typing position, revealing the most recently typed characters, after a few moments of inactivity. This was disconcerting to many users. Only a very slow typing speed would allow the wheel to get out of the way after every character; faster typing speeds resulted in the wheel continuously hiding the typed copy until the typist paused. This made checking the copy for errors a bit more awkward and slow than on Selectric-based terminals.

The same mechanism was used in Xerox's 850 display typing system and 860PDS word processor, and was also sold to OEMs. One notable user was Digital Equipment Corporation who resold the printer as the LQP01 (with a parallel interface) and the LQPSE (with an RS232 serial interface) and supported by Digital's WPS-8 word processing software.

The printer became so common, with so much software supporting its command language, that Diablo emulation became an expected feature on other daisy-wheel printers and even on early laser printers.[5] This was so pervasive that at least one company lived by testing printers for full Diablo 630 compatibility.[6]