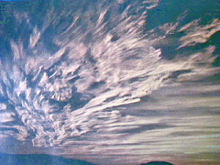 Airglow (also called nightglow) is the very weak emission of light by a planetary atmosphere. In the case of Earth's atmosphere, this optical phenomenon causes the night sky to never be completely dark (even after the effects of starlight and diffused sunlight from the far side are removed).

The airglow phenomenon was first identified in 1868 by Swedish scientist Anders Ångström. Since then it has been studied in the laboratory, and various chemical reactions have been observed to emit electromagnetic energy as part of the process. Scientists have identified some of those processes which would be present in Earth's atmosphere, and astronomers have verified that such emissions are present.

Airglow is caused by various processes in the upper atmosphere, such as the recombination of ions which were photoionized by the sun during the day, luminescence caused by cosmic rays striking the upper atmosphere, and chemiluminescence caused mainly by oxygen and nitrogen reacting with hydroxyl ions at heights of a few hundred kilometers. It is not noticeable during the daytime because of the scattered light from the Sun.

The airglow at night may be bright enough to be noticed by an observer, and is generally bluish in color. Although airglow emission is fairly uniform across the atmosphere, to an observer on the ground it appears brightest at about 10 degrees above the horizon, because the lower one looks the greater the depth of atmosphere one is looking through. Very low down, however, atmospheric extinction reduces the apparent brightness of the airglow.

One airglow mechanism is when an atom of nitrogen combines with an atom of oxygen to form a molecule of nitric oxide (NO). In the process a photon is emitted. This photon may have any of several different wavelengths characteristic of nitric oxide molecules. The free atoms are available for this process because molecules of nitrogen (N2) and oxygen (O2) are dissociated by solar energy in the upper reaches of the atmosphere, and may encounter each other to form NO. Other species that can create air glow in the atmosphere are hydroxyl (OH) [1] [2] ,[3] molecular oxygen (O), sodium (Na) and lithium (Li).[4] See Sodium layer.

The sky brightness is typically quoted in units of astronomical magnitudes per square arcsecond of sky.

How to calculate the effects of airglow

We need first to convert apparent magnitudes into fluxes of photons; this clearly depends on the spectrum of the source, but we will ignore that initially. At visible wavelengths we need the parameter S0(V), the power per square centimetre of aperture and per micrometre of wavelength produced by a zeroth-magnitude star, to convert apparent magnitudes into fluxes --

Hz), the number of photons we receive per square cm of telescope aperture per second from the source is Ns:

(where h is Planck's constant; hν is the energy of a single photon of frequency ν).

The signal-to-noise for an ideal groundbased observation with a telescope of area A (ignoring losses and detector noise), arising from Poisson statistics, is only:

If we assume a 10 m diameter ideal ground-based telescope and an unresolved star: every second, over a patch the size of the seeing-enlarged image of the star, 35 photons arrive from the star and 3500 from air-glow. So, over an hour, roughly

photons arrive from the air-glow, and approximately

arrive from the source; so the S/N ratio is about 35.

It should be clear from this calculation that reducing the view field size can make fainter objects more detectable against the airglow; unfortunately, adaptive optics techniques that reduce the diameter of the view field of an Earth-based telescope by an order of magnitude only as yet work in the infrared, where the sky is much brighter. Space telescopes don't have to worry about the view field restrictions, since they are not impacted by airglow.

Scientific experiments have been conducted[6] to induce airglow by directing high-power radio emissions at the Earth's ionosphere. These radiowaves interact with the ionosphere to induce faint but visible optical light at specific wavelengths[7] under certain conditions.

SwissCube-1's first airglow image of the Earth (shifted to green from near IR) captured on March 3, 2011.

SwissCube-1 is a Swiss satellite operated by Ecole Polytechnique Fédérale de Lausanne. The spacecraft is a single unit CubeSat, which was designed to conduct research into nightglow within the Earth's atmosphere, and to develop technology for future spacecraft. Though SwissCube-1 is rather small (10x10x10 cm) and weights less than 1 Kg, it carries a small telescope which will allow to obtain images of the nightglow, a luminescence phenomena occurring at 100 km of height above the Earth surface. The first SwissCube-1 image came down on February 18, 2011 and was quite black with some thermal noise on it. The first airglow image came down on March 3, 2011. This image has been converted to the human optical range (green) from its near-infrared measurement. This image provides a measurement of the intensity of the airglow phenomena in the near-infrared. The range measured is between 500 – 61400 photons, with a resolution of 500 photons.[8]

Observation of airglow on other Solar System planets