High-temperature superconductors (abbreviated high-Tc or HTS) are materials that have a superconducting transition temperature (Tc) above 30 K (−243.2 °C). From 1960 to 1980, 30 K was thought to be the highest theoretically possible Tc. The first high-Tc superconductor[1] was discovered in 1986 by IBM researchers Karl Müller and Johannes Bednorz, for which they were awarded the Nobel Prize in Physics in 1987.

"High-temperature" has two common definitions in the context of superconductivity:

The label high-Tc may be reserved by some authors for those with critical temperature greater than the boiling point of liquid nitrogen (77 K or −196 °C). However, a number of materials - including the original discovery and recently discovered pnictide superconductors - had critical temperatures below 77K but are commonly referred to in publication as being in the high-Tc class.[4][5]

Technological applications benefit from both the higher critical temperature being above the boiling point of liquid nitrogen and also the higher critical magnetic field (and critical current density) at which superconductivity is destroyed. In magnet applications the high critical magnetic field may be more valuable than the high Tc itself. Some cuprates have an upper critical field around 100 teslas. However, cuprate materials are brittle ceramics which are expensive to manufacture and not easily turned into wires or other useful shapes.

After more than twenty years of intensive research the origin of high-temperature superconductivity is still not clear, but it seems that instead of electron-phonon attraction mechanisms, as in conventional superconductivity, one is dealing with genuine electronic mechanisms (e.g. by antiferromagnetic correlations), and instead of s-wave pairing, d-waves are substantial.

Examples of high-Tc cuprate superconductors include La1.85Ba0.15CuO4, and YBCO (Yttrium-Barium-Copper-Oxide), which is famous as the first material to achieve superconductivity above the boiling point of liquid nitrogen. 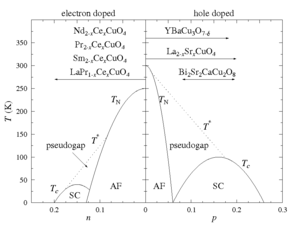 Simplified doping dependent phase diagram of cuprate superconductors for both electron (n) and hole (p) doping. The phases shown are the antiferromagnetic (AF) phase close to zero doping, the superconducting phase around optimal doping, and the pseudogap phase. Doping ranges possible for some common compounds are also shown. After.[17]

Cuprate superconductors are generally considered to be quasi-two-dimensional materials with their superconducting properties determined by electrons moving within weakly coupled copper-oxide (CuO2) layers. Neighbouring layers containing ions such as lanthanum, barium, strontium, or other atoms act to stabilize the structure and dope electrons or holes onto the copper-oxide layers. The undoped 'parent' or 'mother' compounds are Mott insulators with long-range antiferromagnetic order at low enough temperature. Single band models are generally considered to be sufficient to describe the electronic properties. 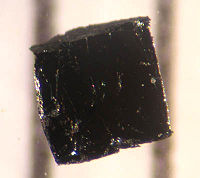 A small sample of the high-temperature superconductor BSCCO-2223.

Possible mechanisms for superconductivity in the cuprates are still the subject of considerable debate and further research. Certain aspects common to all materials have been identified.[7] Similarities between the antiferromagnetic low-temperature state of the undoped materials and the superconducting state that emerges upon doping, primarily the dx2-y2 orbital state of the Cu2+ ions, suggest that electron-electron interactions are more significant than electron-phonon interactions in cuprates – making the superconductivity unconventional. Recent work on the Fermi surface has shown that nesting occurs at four points in the antiferromagnetic Brillouin zone where spin waves exist and that the superconducting energy gap is larger at these points. The weak isotope effects observed for most cuprates contrast with conventional superconductors that are well described by BCS theory.

Similarities and differences in the properties of hole-doped and electron doped cuprates: 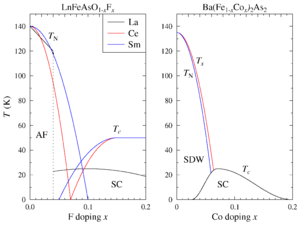 Iron-based superconductors contain layers of iron and a pnictogen—such as arsenic or phosphorus—or a chalcogen. This is currently the family with the second highest critical temperature, behind the cuprates. Interest in their superconducting properties began in 2006 with the discovery of superconductivity in LaFePO at 4 K[23] and gained much greater attention in 2008 after the analogous material LaFeAs(O,F)[14] was found to superconduct at up to 43 K under pressure.[15]

Since the original discoveries several families of iron-based superconductors have emerged:

Most undoped iron-based superconductors show a tetragonal-orthorhombic structural phase transition followed at lower temperature by magnetic ordering, similar to the cuprate superconductors.[21] However, they are poor metals rather than Mott insulators and have five bands at the Fermi surface rather than one. The phase diagram emerging as the iron-arsenide layers are doped is remarkably similar, with the superconducting phase close to or overlapping the magnetic phase. Strong evidence that the Tc value varies with the As-Fe-As bond angles has already emerged and shows that the optimal Tc value is obtained with undistorted FeAs4 tetrahedra.[31] The symmetry of the pairing wavefunction is still widely debated, but an extended s-wave scenario is currently favoured.

Other materials sometimes referred to as high-temperature superconductors

Magnesium diboride is occasionally referred to as a high-temperature superconductor because its Tc value of 39 K is above that historically expected for BCS superconductors. However, it is more generally regarded as the highest Tc conventional superconductor, the increased Tc resulting from two separate bands being present at the Fermi energy.

Fulleride superconductors[32] where alkali-metal atoms are intercalated into C60 molecules show superconductivity at temperatures of up to 38 K for Cs3C60.[33]

Theoretical work by Neil Ashcroft predicted that solid metallic hydrogen at extremely high pressure should become superconducting at approximately room-temperature because of its extremely high speed of sound and expected strong coupling between the conduction electrons and the lattice vibrations.[34] This prediction is yet to be experimentally verified.

The question of how superconductivity arises in high-temperature superconductors is one of the major unsolved problems of theoretical condensed matter physics. The mechanism that causes the electrons in these crystals to form pairs is not known.[7] Despite intensive research and many promising leads, an explanation has so far eluded scientists. One reason for this is that the materials in question are generally very complex, multi-layered crystals (for example, BSCCO), making theoretical modelling difficult.

Improving the quality and variety of samples also gives rise to considerable research, both with the aim of improved characterisation of the physical properties of existing compounds, and synthesizing new materials, often with the hope of increasing Tc. Technological research focuses on making HTS materials in sufficient quantities to make their use economically viable and optimizing their properties in relation to applications.

There have been two representative theories for HTS. Firstly, it has been suggested that the HTS emerges from antiferromagnetic spin fluctuations in a doped system.[36] According to this theory, the pairing wave function of the cuprate HTS should have a dx2-y2 symmetry. Thus, determining whether the pairing wave function has d-wave symmetry is essential to test the spin fluctuation mechanism. That is, if the HTS order parameter (pairing wave function) does not have d-wave symmetry, then a pairing mechanism related to spin fluctuations can be ruled out. (Similar arguments can be made for iron-based superconductors but the different material properties allow a different pairing symmetry.) Secondly, there was the interlayer coupling model, according to which a layered structure consisting of BCS-type (s-wave symmetry) superconductors can enhance the superconductivity by itself.[37] By introducing an additional tunnelling interaction between each layer, this model successfully explained the anisotropic symmetry of the order parameter as well as the emergence of the HTS. Thus, in order to solve this unsettled problem, there have been numerous experiments such as photoemission spectroscopy, NMR, specific heat measurements, etc. But, unfortunately, the results were ambiguous, some reports supported the d symmetry for the HTS whereas others supported the s symmetry. This muddy situation possibly originated from the indirect nature of the experimental evidence, as well as experimental issues such as sample quality, impurity scattering, twinning, etc. 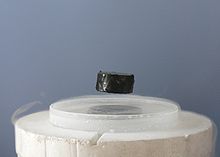 There was a clever experimental design to overcome the muddy situation. An experiment based on flux quantization of a three-grain ring of YBa2Cu3O7 (YBCO) was proposed to test the symmetry of the order parameter in the HTS. The symmetry of the order parameter could best be probed at the junction interface as the Cooper pairs tunnel across a Josephson junction or weak link.[38] It was expected that a half-integer flux, that is, a spontaneous magnetization could only occur for a junction of d symmetry superconductors. But, even if the junction experiment is the strongest method to determine the symmetry of the HTS order parameter, the results have been ambiguous. J. R. Kirtley and C. C. Tsuei thought that the ambiguous results came from the defects inside the HTS, so that they designed an experiment where both clean limit (no defects) and dirty limit (maximal defects) were considered simultaneously.[39] In the experiment, the spontaneous magnetization was clearly observed in YBCO, which supported the d symmetry of the order parameter in YBCO. But, since YBCO is orthorhombic, it might inherently have an admixture of s symmetry. So, by tuning their technique further, they found that there was an admixture of s symmetry in YBCO within about 3%.[40] Also, they found that there was a pure dx2-y2 order parameter symmetry in the tetragonal Tl2Ba2CuO6.[41]

Qualitative explanation of the spin-fluctuation mechanism

While, despite all these years, the mechanism of high-Tc superconductivity is still highly controversial, this being due to mostly the lack of exact theoretical computations on such strongly interacting electron systems, most rigorous theoretical calculations, including phenomenological and diagrammatic approaches, converge on magnetic fluctuations as the pairing mechanism for these systems. The qualitative explanation is as follows. (Note that, in the following argument, one can replace “electron” with “hole” and vice versa depending on the actual material.)

In a normal conductor, a hole is created whenever an electron is moved. This causes a resistivity because charge neutrality must be conserved and as electrons move under an electric field, they drag holes behind them through defects and thermal oscillations in the system. In contrast, in a superconductor, one gets an unlimited supply of electrons without creating holes behind. This is through the creation of so-called Cooper pairs in a superconductor. Cooper pairs are pairs of electrons. In a normal conductor, creation of an electron leads to creation of a hole, which conserves the number of particles. But in a superconductor, it's possible to create a Cooper pair without creating holes and therefore not to conserve the number of particles, hence leading to the unlimited supply of electrons.

In a conventional superconductor, Cooper pairs are created as follows. When an electron moves through the system, it creates a depression in the atomic lattice through lattice vibrations known as phonons. If the depression of the lattice is strong enough, another electron can fall into the depression created by the first electron—the so-called water-bed effect—and a Cooper pair is formed. When this effect becomes strong enough, Cooper pairs win over the creation of holes behind the electrons, and the normal conductor turns into a superconductor through an unlimited supply of electrons by the creation of Cooper pairs.

In a high-Tc superconductor, the mechanism is extremely similar to a conventional superconductor. Except, in this case, phonons virtually play no role and their role is replaced by spin-density waves. As all conventional superconductors are strong phonon systems, all high-Tc superconductors are strong spin-density wave systems, within close vicinity of a magnetic transition to, for example, an antiferromagnet. When an electron moves in a high-Tc superconductor, its spin creates a spin-density wave around it. This spin-density wave in turn causes a nearby electron to fall into the spin depression created by the first electron (water-bed effect again). Hence, again, a Cooper pair is formed. Eventually, when the system temperature is lowered, more spin density waves and Cooper pairs are created and superconductivity begins when an unlimited supply of Cooper pairs, denoted as a phase transition, happens. Note that in high-Tc systems, as these systems are magnetic systems due to the Coulomb interaction, there is a strong Coulomb repulsion between electrons. This Coulomb repulsion prevents pairing of the Cooper pairs on the same lattice site. The pairing of the electrons occur at near-neighbor lattice sites as a result. This is the so-called d-wave pairing, where the pairing state has a node (zero) at the origin.