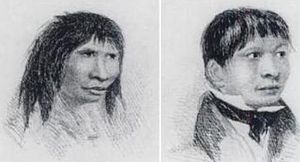 Orundellico, known as "Jeremy Button" or "Jemmy Button", (c. 1815 – 1864) was a native Fuegian of the Yaghan (or Yamana) people from islands around Tierra del Fuego, in modern Chile and Argentina. He was taken to England by Captain FitzRoy in HMS Beagle and became a celebrity for a period.

In 1830, Captain Robert FitzRoy, at the command of the first expedition of the famous Beagle, took a group of hostages from the Fuegian indigenous people after one of his boats was stolen.[1] Jemmy Button was paid for with a mother of pearl button, hence his name. It is not clear whether his family willingly accepted the sale or he was simply abducted. FitzRoy decided to take four of the young Fuegian hostages all the way to England "to become useful as interpreters, and be the means of establishing a friendly disposition towards Englishmen on the part of their countrymen."[1] He seems to have shown great concern for the four, feeding them before his own officers and crew and intending them to be educated and Christianised so that they could improve the conditions of their kin.

The names given to the Fuegians by the crew were: York Minster, Jemmy Button, Fuegia Basket and Boat Memory.[1] Their original names were, respectively: el'leparu, o'run-del'lico and yok'cushly. Boat Memory died of smallpox shortly after his arrival to England, and so his name is lost.

The Beagle arrived back in Plymouth from her first voyage of exploration in mid-October 1830. The newspapers soon started publishing details of the exotic visitors and they became celebrities. In London, they met King William IV. Fuegia Basket, only a young girl, got a bonnet from Queen Adelaide herself.

One year later, the Beagle returned the three surviving Fuegians home, still captained by FitzRoy and at great expense to himself. He took with him a young naturalist, Charles Darwin, in what was the second voyage of HMS Beagle.

After initial difficulty recalling his language and customs, Jemmy was soon out of his European clothes and habits. A few months after his arrival, he was seen emaciated, naked save for a loincloth and long-haired. Nevertheless, he declined the offer to return to England, which Darwin conjectured was due to the presence of his "young and nice looking wife",[2] Lassaweea.[3] It appears that he and the others had taught their families some English.[2]

In 1855 a group of Christian missionaries from the Patagonian Missionary Society, visited Wulaia Bay on Navarino Island, to find that Jemmy still had a remarkable grasp of English. Some time later in 1859, another group of missionaries was killed at Wulaia Bay by the Yaghan, supposedly led by Jemmy and his family. In early 1860 Jemmy visited Keppel Island and gave evidence at the enquiry into the massacre, held in Stanley. He denied responsibility.

In 1863 the missionary Waite Stirling visited Tierra del Fuego and re-established contact with Jemmy, and from then relations with the Yaghan improved. In 1866, after Jemmy's death, Stirling took one of Jemmy's sons, known as Threeboy, to England.[4]

According to Julia Voss,[5] the German children's book, Jim Knopf und Lukas der Lokomotivführer by Michael Ende, translated into English as Jim Button and Luke the Engine Driver, was based on Jemmy Button. Ende, who grew up in Nazi Germany, wanted to write a story that provided a contrast to Adolf Hitler's racist ideology and misuse of Darwin's theories of evolution.[6] Ende's 1960 novel became one of the most successful children's books in postwar Germany[5] and won the Deutscher Jugendliteraturpreis in 1961.