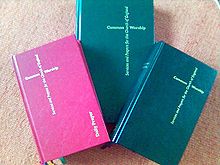 Common Worship is the name given to the series of services authorised by the General Synod of the Church of England and launched on the first Sunday of Advent in 2000. It represents the most recent stage of development of the Liturgical Movement within the Church and is the successor to the Alternative Service Book (ASB) of 1980. Like the ASB it is an alternative to the Book of Common Prayer (BCP) of 1662, which remains officially the normative liturgy of the Church of England.

It has been published as a series of books, rather than a single volume, offering a wider choice of forms of worship than any of its predecessors. It was drafted by the Church of England's Liturgical Commission; the material was then either authorised by General Synod (sometimes with amendments), or simply commended for use by the House of Bishops.

The main Common Worship book is called Common Worship: Services and Prayers for the Church of England. It was published in 2000 alongside Common Worship: President's Edition. These volumes contain the material for Sunday services but, unlike the ASB, contain no readings.

The third book to be published (also in 2000), Common Worship: Pastoral Services, provides for the first time a range of healing services as well as revised provision for weddings and funerals. The former has a completely rewritten preface that no longer describes the threefold purposes of marriage and is much more secular in tone. It includes, for the first time, a congregational response to the declarations by the couple and a long nuptial blessing. The funeral provisions includes material for before and after the service, all completely rewritten. The funeral now includes an optional penitential section, no longer has a required psalm and includes set intercessions. It also allows for a eulogy by one of the mourners, a new departure, at the beginning of the service.

In 2005 the fourth book, Common Worship: Daily Prayer, was published. The form and style of daily morning and evening prayer no longer shows the influence of the BCP but the work of the English Franciscan community and its book Celebrating Common Prayer. The offices are not dissimilar to those of the Roman Catholic Church. Penitence becomes optional, as does the Creed; the Te Deum disappears almost completely, and a Gospel canticle—the Benedictus in the morning and the Magnificat in the evening—follows the reading(s); there is a wide range of intercessions; collects are provided for lesser festivals (unlike in the main book); and there is a psalter. Both the book and the new daily lectionary were trialled in parishes before final publication.

The final book, Common Worship: Festivals, was published in 2008 and provides propers for all the Festivals and Lesser Festivals of the Church of England's calendar.

Several other books, although not part of the principal series, are part of the Common Worship series. Some reproduce parts of Common Worship in a different or more concise form, such as Holy Communion Order One, Additional Collects, Funeral, Marriage, Rites on the Way, Ministry to the Sick, The Reconciliation of a Penitent Form One, Holy Week and Easter (includes readings), and Time to Pray (containing Prayer During the Day and Night Prayer). Those that contain material not found in the rest of Common Worship series include books of readings (e.g. the Daily Eucharistic Lectionary), the annual lectionary (with references only), and Proclaiming the Passion: The Passion Narratives in Dramatized Form. Although not part of Common Worship, New Patterns for Worship is part of the same liturgical phase in the Church of England.

Common Worship represents a radical change in the distribution of liturgy and production of worship materials within the Church of England. It is published in electronic as well as paper form, with the intent that congregations can assemble their own orders of service using the forms they prefer for each section of the service, and if desired extend them with prayers and readings. It also offers a wider choice of forms for each section of the liturgy than any previous liturgy. Many churches have produced separate books for each of a number of different types of service (parish Communion, all age service, different church seasons, etc) to their own specifications. A software package (Visual Liturgy, for Microsoft Windows only) is designed to facilitate the production of complete material for each Sunday, including hymns.

Like the ASB, Common Worship is mostly in modern language (though it retains versions of the Eucharist and other material in the language and using the structure of the BCP). The text of the modern language Eucharist is essentially identical to Rite A of the ASB and is closely modelled on the English version of the post-Vatican II Roman Missal, using identical wording for most of the common of the mass, including the same errors of translation (e.g., "We believe in one God" for "Credo in unum deum", which means "I believe in one God"), though it is claimed to be the independent work of Anglican liturgists. Unlike the ASB it consists not of one book but of several. The main book includes the Sunday services of Morning Prayer and Evening Prayer, Baptism (though not Confirmation), and various forms of Holy Communion, including eight Eucharistic Prayers, not all of which adhere to the Hippolytan form, and all of which are designed to be interpreted in a broadly Reformed sense. A separate book styled Pastoral Services contains the forms for Wholeness and Healing, Marriage, emergency Baptism, Thanksgiving for the Gift of a Child, and Funerals. The Daily Prayer book was published in 2004 and the seasonal booklet, Times and Seasons in 2006. This last is intended to make revised provision for the winter period including Advent, and Epiphany as far as Candlemas - thus replacing the book, The Promise of his Glory - and to replace the booklet Lent, Holy Week and Easter.

The new lectionary authorised at the same time derives from the 1969 Roman Catholic Common Lectionary, which was revised in 1983 with ecumenical input as the Revised Common Lectionary and adopted by many denominations worldwide. The Common Worship lectionary differs from the Revised Common Lectionary at certain times of the year. This runs on a three year cycle, A, B, and C, with, respectively, Matthew, Mark, and Luke being given the gospel readings in one of the three years. The attempt to provide themes has been deliberately abandoned in favor of writers having their own voice in a sequence of readings, either of the whole book or, where books are long, parts of it. One of the reasons for this was to encourage consecutive expository preaching. There is, however, some provision for themes, in that the Old Testament reading can be chosen either to run continuously or to be chosen because it relates to the Gospel. No such provision is made for the New Testament reading. Material from St John's gospel is introduced at various points, most especially in year B, which is devoted to St Mark's gospel, which is shorter than the others.

The books provide a huge number of alternatives, rather than a single form, extending the process begun with the Alternative Services Book, but with the clear intention that it be treated as a resource book rather than used for worship. The expectation (contained in the electronic version) is that parishes will print (or project onto screens) texts for each week. The Service of the Word, authorised earlier but now incorporated into Common Worship, somewhat resembles the Directory of Public Worship produced during the Commonwealth, containing as it does directions as to structure rather than a full liturgy. The "common" of Common Worship is in the framework and structure for each service but then allowing for a variety of prayers and resources to be used within those common structures. In that respect it is a departure from Cranmer's principle of uniformity: 'from henceforth all the whole Realm shall have but one use'.

The desire for diversity and variation has been criticised by some scholars, such as Mark Dalby (The Renewal of Common Prayer ed Perham (CHP 1993)), as making light of the principle of worship being 'common prayer'. Common Worship bears more than a passing resemblance to the pre-Reformation church of which Cranmer commented 'many times there was more business to find out what should be read than to read it when it was found out'. Others, however, have challenged this view. 'Common Worship Today' (Mark Earey & Gilly Myers, eds.) makes the point that worship has always been more diverse than is implied by the use of a single book, and views diversity as realistic and necessary.

One other respect in which Common Worship differs from its predecessor is in relation to the saints. While in the main volume only one eucharistic preface is provided for the saints, other books in the series (particularly Common Worship: Daily Prayer and Common Worship: Festivals) provide far more resources. The provision is distinctly Anglican, however, in that individuals are included who have not undergone formal canonization. On the other hand, although the text tends to avoid statements about the eternal destiny of those who are celebrated, the occasional phrase (e.g. "In communion [...] with all who served you on earth and worship you now in heaven" in the second eucharistic preface for All Saints' Day) seems to reflect the Roman Catholic doctrine of the saints.

The services and resources that comprise Common Worship represent the latest stage of a process of liturgical revision that began in the 1920s. They were originally drafted by the Liturgical Commission. The Commission is made up of a variety of people with different expertise, including lay people, parish clergy and bishops, liturgists, and theologians. The material was passed on to the House of Bishops, which amended the material as it saw fit. It was then presented to the General Synod.

Forms of services that were alternative to equivalents in the Book of Common Prayer were debated by Synod and revised by a synodical Revision Committee in the light of the comments made by Synod members and the wider public. The House of Bishops then reconsidered them, put them into their final form and submitted them to the General Synod for Final Approval as Authorized Services. To be authorized, each service had to gain a two-thirds majority in each House of the Synod (bishops, clergy, and laity).

Additional material, which had no equivalent in the Book of Common Prayer, was debated by the General Synod and then put in its final form and Commended by the House of Bishops.

In the case of authorized services in Common Worship, the Archbishops' Council gave some 800 parishes permission to use draft forms of service on an experimental basis before they were presented to the General Synod. The services were adjusted in the light of feedback from this "field testing". There does not, however, appear to have been any testing at this stage of content for conformity with doctrine. Canon A5 states as follows: "The doctrine of the Church of England is grounded in the Holy Scriptures, and in such teaching of the ancient Fathers and Councils of the Church as are agreeable to the said Scriptures. In particular such doctrine is to be found in the Thirty Nine Articles of Religion, the Book of Common Prayer and the Ordinal". However, elements of Common Worship services are arguably in conflict with the doctrine apparent from these sources. For example, in the communion service the congregation is required to say: "Though we are many, we are one body because we all share in one bread". The tenor of the 39 Articles and the Book of Common Prayer appears to be that membership of the Church (the "one body") is conferred by baptism not by receiving communion. Indeed, the statement in Common Worship appears to imply that children who have not yet been confirmed and therefore do not take communion are not members of the Church.