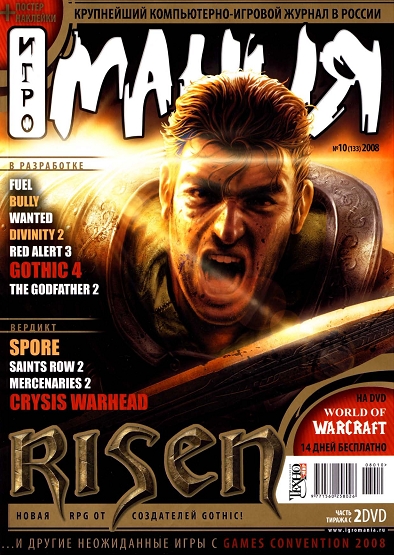 "Igromania" is a monthly n games published in and distributed mostly in and the countries. Tekhnomir (Techworld in Russian) company started the publication in September, 1997. The circulation in March, 2008 was 240,498 copies (the largest in Europe).Fact|date=October 2007 Each issue contains 256 pages. The magazine comes with a poster, four stickers, and two dual-layer disks.In its early years, "Igromania" focused mainly on solutions and guides to videogames gradually enlarging the variety of content topics and finally moving solutions and guides to the accompanying CD and later DVD.

The first issue of "Igromania" came out in September, 1997. The magazine was founded by Evgeny Isupov and Alexander Parchuk who were both originally engaged in publishing books in Best Computer Games series and later decided to enter the magazine publishing business.

The print run of the first issue was about 16,000 copies. Due to massive returns, the number of printed copies of consequent issues was significantly reduced. Originally, the magazine was black-and-white with only the cover being in color. Several issues were printed on a Risograph printer. It was planned to start full color printing in the summer of 1998 but the August crisis in the country forced to postpone such plans.

During the first years of publication, the editors could not decide upon the game platform preference of the magazine. If the first issue carried reviews of only a few games, the following issue was entirely dedicated to games on this platform. Very soon the magazine focused on PC games and this focus continues to remain unchanged till now with the only exception of Videomania section on one of its DVD disks.

In 1999, Denis Davydov, who had previously worked in "Hacker" magazine and even before that had created "Game World Navigator" magazine, became editor-in-chief of "Igromania". He initiated dramatic reforms in the magazine and, by 2002, the magazine completely changed its looks and content. Guides and solutions gave way to the widest spectrum of content: game news, previews, reviews, articles about hardware, software, the Internet, game modding and development, features, editors' personal columns, online and desktop games, cheats, retro games, cybersport, computer game competitions, and three hotlines (software, games, and game modding).

The [http://www.igromania.ru/Articles/DVDMania/ DVD disks] that come with every issue of "Igromania" are very popular and attract a great attention. These disks carry content of all sorts. It is often said that many tend to buy "Igromania" only because of these disks.

In 2004, [http://www.igromania.ru/vm/ Videomania] emerged as part of the magazine. Started as intro movies for each disk, it soon turned into a separate section. Videomania now has its own disk and is produced by a studio headed by Anton Logvinov. This studio also produces a regular television program about PC and videogames for A-One channel and video materials for [http://www.igromania.ru "Igromania" website] . All Videomania movies are dubbed by professional actors, such as Boris Repetur, one of the anchors of "Ot Vinta!" program that ran on Russian TV from 1994 to 1998.

Each issue of "Igromania" carries 30 to 60 pages of commercial ads. This relatively small amount of ads (considered to be small as the total size of the magazine is 256 pages) is explained by the publisher due to [http://igromedia.ru/magazines/igromania/2.html high advertizing prices] .

Simplicity and clarity of information published in "Igromania" are the basic principles that the editors follow so that the published texts can be understood by the widest audience. Yet, unlike "Best Computer Games" magazine, "Igromania" does not avoid videogame slang.

Below is the list of permanent magazine content topics:
* News Meridian - a selection of monthly gaming news
* DVD-Mania - the contents of the first DVD
* Videomania - the contents of the second DVD (video only)
* Out of the Horse's Mouth - reports about the most promising but not yet released games that the authors managed to played personally
* R&S: In Development - previews of upcoming games
* R&S: Direct Speech - interviews with developers
* In the Spotlight - detailed previews (usually on four pages) of the most anticipated games
* R&S: Verdict - reviews on new released and soon-to-be-released games
* Domestic Localizations - reviews localized foreign games
* Game of the Month - results of the vote for the best game of the month (taken monthly at "Igromania" website) and advice from the editors about the games worth playing in the upcoming month
* Hotline: Games - answers to most frequently asked questions about games
* Game Over - retro games reviews, A Month in the History of Games calendar
* Iron Plant - reviews of new computer hardware, hardware tests, optimal component configurations and prices, and answers to the frequently asked questions about hardware
* Game Building - modding, reviews of game editors and s
* Special - various special materials, such as game companies' histories, analytics, and reviews of new books and movies based on games
* Playing Online - online games news, previews, reviews, analytics, and interesting links
* Cybersport - news and reports about everything in the world of cybersport
* CODEx - s, Easter eggs, and hints
* "Igromania" Mail - letters to the editor and answers
* Brainstorm - computer games knowledge contests (Test, Screentours, and Photographic Memory)
* Dissenting Opinion - personal columns

"Igromania" utilizes a ten-point game rating system with 0.5 minimal increment. From 2003 through 2007, when "Igromania" dramatically toughened its rating system, only four games received the maximum score: , , and .

Based on the review scores, games can receive special awards:
* Editors' Choice - an absolute hit in the editors' opinion
* Supergraphics - games with the most advanced or/and most artistic visuals
* Breakthrough - innovations in the genre

Since 2002, the highlight of every February issue is the Year Summary that names the Best Game of the (previous) Year:

Starting from 2004, "Igromania" from time to time publishes controversial columns by leading industry analysts about the current situation on the Russian game development and distribution market causing thought provoking discussions among local publishers and developers. One of such columns [http://www.igromania.ru/Articles/5159/Skazhi_licenzii_net.htm "Say No to License"] , by Mikhail Verbitsky, published in May, 2006 launched one of the [http://www.dtf.ru/forum/flat.php?id=9574&page=1&page_size=20 hottest discussions] among Russian publishers and developers.