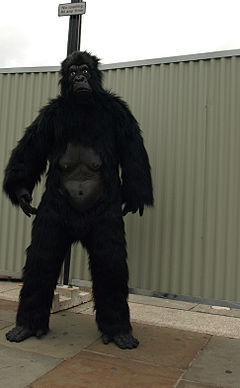 A man wearing a gorilla suit.

Gorilla suits have been used both to represent real gorillas in film and on stage, and also as a source of humour. The gorilla suit is a popular Halloween and masquerade party costume. 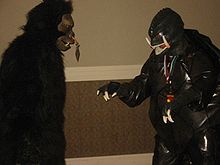 An actor in a gorilla suit spars with an actor in a Gamera costume at CONvergence (convention).

Gorilla suit performance involves pantomime, wearing a heavy costume, broad physical comedy skills, and a partial suspension of disbelief, while still playing on the very artifice involved. In this respect, gorilla suits are not far removed from puppetry. Jim Henson utilized typical gorilla suits, and never a full-bodied gorilla Muppet, in several productions. The person inside the gorilla suit is often uncredited.

The early history of the art of gorilla impersonation dates at least to the late 1920s, with the rise of Charles Gemora, an early practitioner of the art in such short films as Circus Lady and the Our Gang entry Bear Shooters. In later decades, in addition to abounding in B movies such as Bela Lugosi Meets a Brooklyn Gorilla, the gorilla suit came to prominence in television, in a wide range of series, from 1960s sitcoms like The Addams Family and The Beverly Hillbillies, which typically attempted to present their gorillas as "real," to more recent series such as L.A. Law and Scrubs, which have contrived to have regular characters don the primate costume.

In recent decades, the work of performers or designers have altered the mechanics and effect of gorilla suits, often using animatronics, taxidermy eyes, realistic fur, and other aides. Jim Henson's Creature Shop has contributed to this development in its own way, through work on Buddy and George of the Jungle, and many suit performers of Henson creatures portrayed gorillas in other productions.

A gorillagram is a gift message, similar to a singing telegram, but delivered by a performer dressed in a gorilla suit.

Many entertainment companies worldwide have offered gorillagrams and continue to do so. In Australia, the costumes include a heavy crash helmet, introduced after the recipient of one gorillagram, believing the gorilla to be real, rendered the actor unconscious by use of a typewriter (which was destroyed and the actor hospitalised). A gorillagram company run by Clive Gibbons has been an important plot element in episodes of Neighbours.