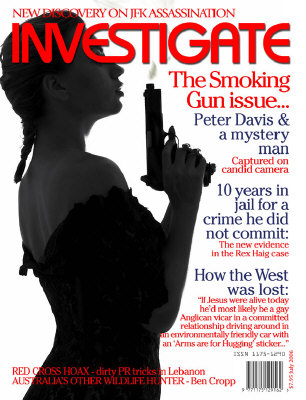 "Investigate" is a current affairs magazine published in . It has a right-wing, conservative Christian editorial standpoint and has published a number of controversial articles, many criticising policies and members of the current Labour government.

It is edited by .

In October 2000, "Investigate" published a story of alleged chemical contamination in by the 's local subsidiary, which had produced the 2,4,5-T and 2,4-D at their factory in the city. [ [http://www.investigatemagazine.com/oct00dow.htm The Poisoning Of New Zealand ] ] In January 2001 "Investigate" then published an interview with a former senior executive of the chemical company who confirmed not only that the two herbicides had been mixed to produce the defoliant Agent Orange for US use in the , but also that surplus drums of the toxic substance had been buried on nearby land now covered by a housing subdivision. [http://www.investigatemagazine.com/pdf's/jan2.pdf] The Government and its Ministry of Health officials attempted to play down the Investigate story,Fact|date=March 2008 so the magazine then obtained a file kept by a former senior hospital matron in the 1960s and 70s, documenting dozens of bizarre in local children often associated with poisoning. The magazine published those pictures in its April 2001 issue, [http://www.investigatemagazine.com/pdf's/ap1to3.pdf] . Subsequent reports in 2004 confirmed that dioxin levels in the blood of New Plymouth residents were many times higher than the national average.

The , issue of "Investigate" contains an interview with then Labour MP . In the article Tamihere makes a number of allegations, including accusing Prime Minister of being unable to deal with , that Labour deliberately lost the 1993 General Election, and that it is "very dangerous" to be in the Labour Party if "you're a free and independent spirit". He also is recorded as making insulting remarks about , and the gay MPs of the Labour Party, and about women in leadership generally. [ [http://www.investigatemagazine.com/tamihere.htm The Full Monty - John Tamihere I ] ]

The sexuality of Peter Davis

The September 2006 issue contained a photo of Peter Davis, the husband of Helen Clark, being kissed by a man on election night 2005. The photo had earlier featured, with repeated screenings, on a Prime Television current affairs election special hosted by Paul Holmes. A Sunday newspaper, The Sunday Star-Times, gave the photo in Investigate front page treatment with a headline denying that Davis was gay, although Investigate had not actually made this specific allegation. The timing of the Investigate publication happened to coincide with the revelations in Parliament by Labour MPs David Benson-Pope and Trevor Mallard that National Party leader Don Brash was having an affair. Ms Clark described the gay allegations as "vile, baseless lies". [ [http://www.theaustralian.news.com.au/story/0,23599,20435121-401,00.html My husband isn't gay, says New Zealand PM | The Australian ] ] The picture was further muddied however when Investigate published emails from newspaper editors [ [http://briefingroom.typepad.com/the_briefing_room/2006/09/did_the_pms_off.html Tbr.Cc: Did The Pm'S Office Spin The Sst Story? ] ] which revealed that they had been tipped off about the magazine's impending issue by the Prime Minister's office itself, in advance of publication, raising questions about the Government's role in manipulation of the stories.

The May 2007 issue contains allegations that in the 1980s Police Commissioner played a pornographic video as entertainment at a function in , and that and , who would both go on to be Labour government ministers, were involved in covering up the scandal. The same article alleges that other members of the Labour government in the early 2000s were aware of bestiality and police videotapes in the possession of the New Zealand Police. [ [http://briefingroom.typepad.com/the_briefing_room/2007/05/media_release_f.html TBR.cc: Howard Broad and Police ] ] While Broad and Police Minister Annette King used a former police officer's testimony to try and discredit the Investigate article, the magazine then forced a Police Complaints Authority investigation by publishing further information about the activities of the Police Minister's main witness. [ [http://www.thebriefingroom.com/archives/2007/12/police_minister.html INVESTIGATEMAGAZINE.TV: Police Minister duped by bent cop: July 07 issue ] ]

Alleged Links with the Exclusive Brethren

The Labour Party claims that members of the church are behind many of the anti-Labour Party allegations published by "Investigate". [ [http://www.smh.com.au/news/world/clark-fury-grows-at-alleged-slur-campaign/2006/09/18/1158431644442.html Clark fury grows at alleged slur campaign - World - smh.com.au ] ] The connection is that private investigator Wayne Idour, who has previously done work for the Exclusive Brethren, is one of the sources for the May 2007 story about police corruption. [ [http://tvnz.co.nz/view/page/1122028 Idour denies being tape source | POLITICS | NEWS | tvnz.co.nz ] ] Investigate responded by calling Labour's allegations a deliberate smear campaign and a "conspiracy theory" [ [http://www.nzherald.co.nz/section/1/story.cfm?c_id=1&objectid=10402625&pnum=2 Labour denies hiring private eyes to go through Nats' rubbish - 23 Sep 2006 - NZ Herald: New Zealand National news ] ] , saying the magazine had a wide range of sources and that all stories had been generated through routine inquiries. Idour's role as an informant in the 2007 police story was because he had served in the Dunedin police at the relevant time. Other sources were quoted in the article, including interviews with eyewitnesses.