The Cunning Little Vixen (Czech: Příhody Lišky Bystroušky, lit. The Adventures of Vixen Sharp-Ears) is an opera by Leoš Janáček, with a libretto adapted by the composer from a serialized novella (daily comic) by Rudolf Těsnohlídek and Stanislav Lolek, which was first published in the newspaper Lidové noviny.

When Janáček discovered Těsnohlídek's comic-strip and decided to turn it into an opera, he began work by meeting with the author and beginning a study of animals. With this understanding of the characters involved, his own 70 years of life experience, and an undying, unrequited love for the much younger, married Kamila Stösslová, he began work on the opera. Writing his own libretto, he transformed himself into the forester, and Kamila into the vixen and Terynka. He also transformed the originally comedic cartoon into a philosophical reflection on the cycle of life and death by including the death of the vixen. As with other operas by older composers, this late opera shows a deep understanding of life leading to a return to simplicity.

It was given its premiere performance on 6 November 1924 in Brno conducted by František Neumann, with Ota Zítek as director and Eduard Milén as stage designer.

The opera received its Italian premiere at La Scala in 1958 with Mariella Adani in the title role. The work was first staged in England by the Sadler's Wells Opera Company (since 1974 English National Opera) in 1961 - under the direction of Colin Graham, conductor Colin Davis, scenery and costume designs by Barry Kay. 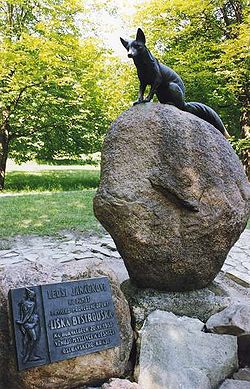 In the forest, the animals and insects are playing and dancing. The Forester enters and lies down against a tree for a nap. A curious Vixen Cub (usually sung by a young girl), inquisitively chases a frog right into the lap of the surprised forester who forcibly takes the vixen home as a pet. Time passes (in the form of an orchestral interlude) and we see the Vixen, now grown to a young adult (and sung by a soprano), tied up in the forester's yard with the conservative old dachshund. Fed up with life in confinement, the vixen chews through her rope, attacks the chickens, and hops the fence to freedom.

The vixen takes over a badger's home and kicks him out. In the inn, the pastor, forester, teacher and schoolmaster drink and talk about their mutual infatuation with the gypsy girl Terynka. The drunken schoolmaster leaves the inn and mistakes a sunflower behind which the vixen is hiding for Terynka and confesses his devotion to her. The forester, also on his way home, sees the vixen and fires two shots at her, sending her running. Later, the vixen, coming into her womanhood, meets a charming boy fox, and they retire to the badger's home. An unexpected pregnancy and a forest full of gossipy creatures necessitate their marriage, which rounds out the act.

The poacher Harasta is engaged to Terynka and is out hunting in preparation for their marriage. He sets a fox trap, which the numerous vixen cubs mock. Harasta, watching from a distance, shoots and kills the vixen, sending her children running. At Harasta's wedding, the forester sees the vixen's fur, which Harasta gave to Terynka as a wedding present, and flees to the forest to reflect. He returns to the place where he met the vixen, and sits at the tree grieving the loss of both the vixen and Terynka. His grief grows until, just as in the beginning of the opera, a frog unexpectedly jumps in his lap, the grandson of the one who did so in act one. This reassurance of the cycle of death leading to new life gives his heart a deep peace.

This is Janáček's lightest opera, and, despite the titular vixen's death at the end of the work, it stands in contrast to the often brutally serious nature of operas such as Jenůfa and Káťa Kabanová. In The Cunning Little Vixen, the composer moved away from the more conversational style of previous and subsequent operas in favor of a more folk-like style, and wove into its fabric some of his most experimental opera concepts (ballet, mime, and orchestral interludes).

At Janáček's request, the final scene from The Cunning Little Vixen was performed at his funeral in 1928.