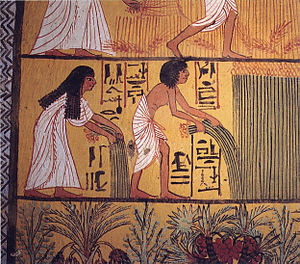 The cuisine of ancient Egypt covers a span of over three thousand years, but still retained many consistent traits until well into Greco-Roman times. The staples of both poor and wealthy Egyptians were bread and beer, often accompanied by green-shooted onions, other vegetables, and to a lesser extent meat, game and fish.

There are few precise accounts of how many meals were eaten, but it has been assumed that the wealthy would have two or three meals a day; a light morning meal, a larger lunch and dinner later in the evening. The general population would most likely eat a simple breakfast of bread, beer and onions and a main meal in the early afternoon.[1]

Depictions of banquets can be found in paintings from both the Old Kingdom and New Kingdom. They usually started sometime in the afternoon. Men and women were separated unless they were married. Seating varied according to social status, with those of the highest status sitting on chairs, those slightly lower sat on stools and those lowest in rank sat on the bare floor. Before the food was served, handwashing basins were provided along with perfumes and cones of scented fat were lit to spread pleasant smells or to repel insects, depending on the type. lily flowers and flower collars were handed out and professional dancers (primarily women) entertained, accompanied by musicians playing harps, lutes, drums, tambourines, and clappers. There were usually considerable amounts of alcohol and abundant quantities of foods; there were whole roast oxen, ducks, geese, pigeons, and at times fish. The dishes frequently consisted of stews served with great amounts of bread, fresh vegetables and fruit. For sweets there were cakes baked with dates and sweetened with honey. The goddess Hathor was often invoked during feasts.[2] Food could be prepared by stewing, baking, boiling, grilling, frying, or roasting. Spices and herbs were added for flavor, though the former were expensive imports and therefore confined to the tables of the wealthy. Food such as meats was mostly preserved by salting, and dates and raisins could be dried for long-term storage. The staples bread and beer were usually prepared in the same locations, as the yeast used for bread was also used for brewing. The two were prepared either in special bakeries or, more often, at home, and any surplus would be sold.[1] 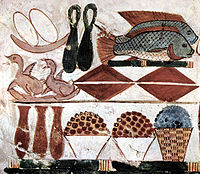 Depiction of various foods in a burial chamber, c. 1400 BC.

The predynastic cuisine differed from later eating habits due to changes in climate. Egypt went from being a lush region to a drier climate. Initially, there was plenty of game such as antelope, gazelle, hippo, crocodile, ostrich, waterfowl, and fresh and saltwater fish. Smaller game like sheep, goats, cattle, and even hyenas were eaten. However, by dynastic times (around 3000 BC) the availability of game had decreased considerably and was by then primarily a sport of the affluent, even though small game often would supplement the diet of the poor. The New Kingdom was a period with innovations in diet due to foreign trade and warfare. Pomegranates were introduced and almonds were imported. It is also possible that apples and apricots were imported on a small scale, and by Greco-Roman times quinces, pears, plums, peaches, filbert, walnut, pine nut, and pistachios were introduced.

Honey was the primary sweetener, but was rather expensive. There was honey collected from the wild, and honey from domesticated bees kept in pottery hives. A cheaper alternative would have been dates or carob. There was even a hieroglyph (nedjem/bener) depicting a carob pod that bore the primary meaning of "sweet; pleasant." Oils would be made from lettuce or radish seed, safflower, ben, balanites and sesame. Animal fat was employed for cooking and jars used for storing it have been found in many settlements. 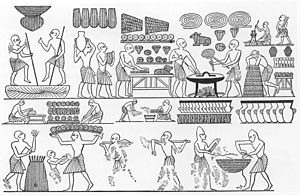 A depiction of the royal bakery from an engraving in the tomb of Ramesses III in the Valley of the Kings. There are many types of loaves, including ones that are shaped like animals. 20th dynasty.

Egyptian bread was made almost exclusively from emmer wheat, which was more difficult to turn into flour when compared with most other varieties of wheat. The chaff does not come off through threshing, but comes in spikelets that needed to be removed by moistening and pounding with a pestle to avoid crushing the grains inside. It was then dried in the sun, winnowed and sieved and finally milled on a saddle quern, which functioned by moving the grindstone back and forth, rather than with a rotating motion. The baking techniques varied over time. In the Old Kingdom, heavy pottery molds were filled with dough and then set in the embers to bake. During the Middle Kingdom tall cones were used on square hearths. In the New Kingdom a new type of a large open-topped clay oven, cylindrical in shape, was used, which was encased in thick mud bricks and mortar. Dough was then slapped on the heated inner wall and peeled off when done. Tombs from the New Kingdom show images of bread in many different shapes and sizes. Loaves shaped like human figures, fish, various animals and fans, all of varying dough texture. Flavorings used for bread included coriander seeds and dates, but it is not known if this was ever used by the poor.[3]

Other than emmer, barley was grown to make bread and also used for making beer, and so were lily seeds and roots, and tiger nut. The grit from the quern stones used to grind the flour mixed in with bread was a major source of tooth decay due to the wear it produced on the enamel. For those who could afford there was also fine dessert bread and cakes baked from high-grade flour.[1]

Along with bread, beer was a staple of the ancient Egyptians and was drunk daily. Like most modern African beers, but unlike European beer, it was very cloudy with plenty of solids and highly nutritious, quite reminiscent of gruel. It was an important source of protein, minerals and vitamins and was so valuable that beer jars were often used as a measurement of value and was used in medicine. Little is known about specific types of beer, but there is mention of, for example, sweet beer but without any specific details mentioned. Conical pottery from pre-dynastic times has been found at Hierakonpolis and Abydos with emmer wheat residue that shows signs of gentle heating from below. Though not conclusive evidence of early beer brewing it is an indication that this might have been what they were used for. Archeological evidence shows that beer was made by first baking "beer bread", a type of well-leavened, lightly baked bread that did not kill the yeasts, which was then crumbled over a sieve, washed with water in a vat and then left to ferment [1]. There are claims of dates or malts having been used, but the evidence is not concrete.

Microscopy of beer residue points to a different method of brewing where bread was not used as an ingredient. One batch of grain was sprouted, which produced enzymes. The next batch was cooked in water, dispersing the starch and then the two batches were mixed. The enzymes began to consume the starch to produce sugar. The resulting mixture was then sieved to remove chaff and yeast (and probably lactic acid) was then added which began a fermentation process that produced alcohol. This method of brewing is still used in parts of non-industrialized Africa. Most beers were made of barley and only a few of emmer wheat, but so far no evidence of flavoring has been found.[4]

Vegetables were eaten as a complement to the ubiquitous beer and bread, and the most common were long-shooted green scallions and garlic and both also had medical uses. There was also lettuce, celery (eaten raw or used to flavor stews), certain types of cucumber and, perhaps, some types of Old World gourds and even melons. By Greco-Roman times there were turnips, but it is not certain if they were available before that period. Various tubers of sedges, including papyrus were eaten raw, boiled, roasted or ground into flour and were rich in nutrients. Tiger nut (Cyperus esculentus) was used to make a dessert made from the dried and ground tubers mixed with honey. Lily and similar flowering aquatic plants could be eaten raw or turned into flour, and both root and stem were edible. A number of pulses and legumes such as peas, beans, lentils and chickpeas were vital sources of protein. The excavations of the workers' village at Giza have revealed pottery vessels imported from the Middle East, which were used to store and transport olive oil [5] as early as the 4th Dynasty.

The most common fruit were dates and there were also figs, grapes (and raisins), dom palm nuts (eaten raw or steeped to make juice), certain species of Mimusops, and nabk berries (a species of the genus Ziziphus).[1] Figs were so common because they were high in sugar and protein. The dates would either be dried/dehydrated or eaten fresh. Dates were sometimes even used to ferment wine and the poor would use them as sweeteners. Unlike vegetables, which were grown year round, fruit was more seasonal. Pomegranates and grapes would be brought into tombs of the deceased. Coconuts were an imported delicacy only bought and brought over to Egypt for the rich.

Hunting game birds and plowing a field. Depiction on a burial chamber from c. 2700 BC. Tomb of Nefermaat I and his wife Itet.

Meat came from domesticated animals, game and poultry. This possibly included partridge, quail, pigeon, ducks and geese. The chicken most likely arrived around the 5th to 4th century BC, though no chicken bones have actually been found dating from before the Greco-Roman period. The most important animals were cattle, sheep, goats and pigs (previously thought to have been taboo to eat). Beef was generally more expensive and would at most have been available once or twice a week, and then mostly for the royalty. However, excavations at the Giza worker's village have uncovered evidence of massive slaughter of beef, mutton and pork, such that researchers estimate that the workforce building the Great Pyramid was fed beef every day.[6] Mutton and pork were more common. Poultry, both wild and domestic and fish were available to all but the most destitute. The alternative protein sources would rather have been legumes, eggs, cheese and the amino acids available in the tandem staples of bread and beer. Mice and hedgehogs were also eaten and a common way to cook the latter was to encase a hedgehog in clay and bake it. When the clay was then cracked open and removed, it took the prickly spikes with it.[1]