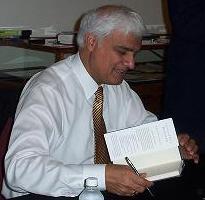 Zacharias was born in and converted to Christianity following a suicide attempt at the age of 17.

In May 1972 Zacharias married Margaret ("Margie") Reynolds, whom he met at his church's youth group.

He was later ordained by the and commissioned as an international evangelist. He founded Ravi Zacharias International Ministries in 1984 to pursue his calling as a "classical evangelist in the arena of the intellectually resistant."

Zacharias was invited to spend the summer of 1971 in , where he evangelized to the American soldiers, as well as to POWs and .

In 1983, Zacharias was invited to speak in at the 's annual evangelist's conference. It was here that he first noticed a lack of ministry in the area of .

In 1989, shortly after the fall of the , Zacharias was invited to speak in . While there he spoke to students at the Lenin Military Academy as well as political leaders at the Center for Geopolitical Strategy.

Zacharias took a sabbatical in 1990 and spent part of that year as a visiting scholar at . There he heard lectures by men such as and studied under professors such as and Don Cuppitt. He also wrote his first book, "A Shattered Visage: The Real Face of Atheism."

In 1993 Zacharias was invited to speak at his first at ,

Zacharias attracted media attention when in 2004 (LDS Church) opened its signature pulpit at the to an outside evangelist for the first time in over a century (the last being in 1871). Zacharias delivered a sermon on "Who Is the Truth? Defending Jesus Christ as The Way, The Truth and The Life" to some 7,000 lay-persons and scholars from both LDS and Protestant camps in an initiatory move towards open dialog between the camps. [cite news |first=Carrie A. |last=Moore |title=Evangelical preaches at Salt Lake Tabernacle |url=http://deseretnews.com/dn/view/0,1249,595105580,00.html |work=Deseret Morning News |publisher=deseretnews.com |date=2004-11-15 |accessdate=2008-02-15 ]

Some evangelicals criticized Zacharias' decision not to use this opportunity to directly address the "deep and foundational" differences between the historic Christian faith and that of the LDS church. He responded by asserting that Christians should not immediately condemn Mormonism's theological differences but "graciously build one step at a time in communicating our faith with clarity and conviction". He said this is just as effective as showing someone the faults of their faith. [cite news |first=Pauline J. |last=Chang |title=Evangelical Defends Decision to Speak at Mormon Tabernacle|url=http://www.christianpost.com/article/20041228/7363_Evangelical_Defends_Decision_to_Speak_at_Mormon_Tabernacle.htm |work=The Christian Post|publisher=christianpost.com|date=2004-12-24|accessdate=2008-03-20 ] The speaking engagement was nearly sabotaged by a claim by event organizer Greg Johnson, president of Standing Together, that Zacharias had nothing to do with editing the book "The Kingdom of the Cults" and had only loaned his name to the latest edition. Johnson later apologized for his comment. [cite news |first=James A. |last=Beverley |title=Evangelist in Brigham Young's Court |url=http://www.christianitytoday.com/ct/2005/january/2.20.html |work=Christianity Today |Publisher=christianitytoday.com |date=2005-01|accessdate=2008-03-20 ]

Zacharias is also a frequent keynote lecturer within the evangelical community at events such as the Future of Truth conference in 2004, [cite news |first=PR |last=Newswire |title= Future of Truth Conference Explores Biblical Realities, Exposes Theological Heresies to Present a More Convincing Picture of Truth in Today's Society; Conference Will Feature Trusted Theologians Ravi Zacharias, William Lane Craig, Phillip Johnson, Erwin Lutzer, Emir Caner and Frank Peretti at The Moody Church in Chicago. |url=http://www.accessmylibrary.com/coms2/summary_0286-21985798_ITM |publisher=PR Newswire Association LLC |date=2004-07-15 |accessdate=2008-02-18 ] the ' Convention and Exposition in 2005, [cite news |first=Pauline J. |last=Chang |title=Thousands Flock to Anaheim for Largest Christian Communications Convention |url=http://www.christianpost.com/article/20050213/13287_Thousands_Flock_to_Anaheim_for_Largest_Christian_Communications_Convention.htm |work=The Christian Post |date=2005-02-13 |accessdate=2008-02-18 ] the National Conference on Christian Apologetics in 2006, [cite web |url=http://www.apologeticsindex.org/372-national-conference-on-christian-apologetics |title=(Past event) The National Conference on Christian Apologetics |accessdate=2008-02-18 |work=Apologetics Index ] and MissionFest Toronto in 2007. [cite news |first=Michelle |last= Vu |title=MissionFest Opens Asking 'What Does it Mean to be Human?' |url=http://www.christianpost.com/article/20070302/26103_MissionFest_Opens_Asking_'What_Does_it_Mean_to_be_Human%3F'.htm |work=The Christian Post |date=2007-03-02 |accessdate=2008-02-18 ] On successive nights in October 2007, he addressed first the students and faculty of , then the community of , on the topic of evil and suffering in the wake of the . [cite news |first=Lindsay |last=Key |title=Virginia Tech audience hears Christian speaker |url=http://www.roanoke.com/news/nrv/wb/135261 |work=The Roanoke Times |publisher=roanoke.com|date=2007-10-10 |accessdate=2008-02-15 ] In addition, Zacharias has represented the evangelical community at occasions such as the in , the Annual Prayer Breakfast at the , and the Prayer Breakfast in , and was named honorary chairman of the 2008 National Day of Prayer task force.

Zacharias argues that a coherent must be able to satisfactorily answer four questions: that of origin, meaning, morality, and destiny. He claims that while every major religion makes exclusive claims about truth, the Christian faith is unique in its ability to answer all four of these questions. [cite book |title=Deliver Us From Evil |last=Zacharias |first=Ravi |year=1997 |publisher=Word |location=Nashville |isbn=084993950X |pages=219-220 ] He routinely speaks on the coherency of the Christian worldview, [cite news |first=Julia |last=Duin |title=Christian worldview; Theologian-author Zacharias decries media double-standard. |url=http://goliath.ecnext.com/coms2/summary_0199-3078820_ITM |work=The Washington Times |date=2003-07-04 |accessdate=2008-02-18 ] claiming that Christianity is capable of withstanding the toughest philosophical attacks. [cite news |title=Ravi Zacharias: Defender of the FAITH; Alpharetta minister takes the Gospel to intellectuals. |url=http://nl.newsbank.com/nl-search/we/Archives?p_product=AT&p_theme=at&p_action=search&p_maxdocs=200&p_topdoc=1&p_text_direct-0=0EADA2FFC6CF5BD0&p_field_direct-0=document_id&p_perpage=10&p_sort=YMD_date:D&s_trackval=GooglePM |work=The Atlanta Journal and The Atlanta Constitution |date=1997-03-01 |accessdate=2008-02-18 ] Zacharias asserts that the apologist must argue from three levels: the theoretical to line up the logic of the argument, the arts to illustrate, and "kitchen table talk" to conclude and apply. [cite book |title=Is Your Church Ready? |last=Zacharias |first=Ravi |coauthors=Norman L. Geisler |year=2003 |publisher=Zondervan |location=Grand Rapids |isbn=084993950X |url=http://www.rzim.org/resources/jttran.php?seqid=90 |accessdate=2008-03-17]

In particular, Zacharias' own style of apologetic focuses predominantly on Christianity's answers to life's great existential questions, [For example: cite book |title=Can Man Live Without God |last=Zacharias |first=Ravi |year=1994 |publisher=Word Publishing |location=Dallas |isbn=0849911737 |pages=Introduction, page xvi] rather than any scientifically inclined defense of God. What little discussion Zacharias does appropriate to scientific matters, he devotes to the question of human origin. He has voiced skepticism over what he believes to be inadequate empirical evidence in the fossil records for an honest endorsement of the theory of . He also questions the claim that evolution is compatible with the , believing the two to be irreconcilable and inconsistent. This stems from the belief that the second law of thermodynamics dictates that all material systems in the universe will, if left to their own devices, tend to disorder. This notion, says Zacharias, does not conform to the key tenets of evolution, which postulate a marked increase in the order of biological life. [cite book |title= The Real Face of Atheism |last=Zacharias |first=Ravi |year 2004 |Publisher=Baker Books |isbn=0801065119 |pages=45-47]