The National Day Parade 2007 (NDP07) was a national ceremony held on 9 August 2007 at the Marina Bay Floating Stadium to commemorate Singapore's 42nd year of independence. For the first time, the event was held in the Marina Bay area.

The parade's logo for the 2007 celebrations embraces the theme "City of Possibilities". The logo centres around the prominent and easily recognizable Marina Bay Skyline.

Dynamic of five stars represents Singapore's core values and celebrates our people living in harmony amidst ethnic and religious diversity.

The colour scheme of the NDP logo was deliberately created to be in line with Urban Redevelopment Authority's (URA) Marina Bay logo, creating a greater sense of connection between NDP and Marina Bay for years to come.

All the marching contingents lined up on August 9 2007

Flowing waves below the skyline of Singapore represents the vibrancy of our global city. Outline of the buildings form the word "NDP @ Marina Bay". It links NDP celebrations with the new venue at Marina Bay and provides a consistent brand logo for future NDPs to Marina Bay.

The orange on the logo represents the passion and determination to build a dynamic city of possibilities. Purple embodies dignity and hope as Singaporeans come together to celebrate the nation's independence. Blue signifies confidence in overcoming challenges and adversities. Blue reflects the grace and harmony of Singapore as a "Garden City".

Unlike previous year of mass display acts, the 2007 parade's show titled “PossibiCity” — in line with this year’s NDP theme “City of Possibilities” — was broken up into five segments: "Sea", "Earth", "Sky", "People" and "Fire". The elements are a representation of Singapore's past, growth, technological advancement, dreams and passion. The wet touch was the main highlight during the "Sea" segments of the show. The "People" segment, paid tribute to Singapore pioneers; and "Fire" was the element that lighted up the grand finale.[1] The fireworks display, lasting slightly over three minutes, was synchronised to a specially composed piece of music and integrated with water effects, flames, lasers and lights.

The National Day Parade featured a brand new one-hour pre-parade segment showcasing the best of dance, theatre and the arts in Singapore, but the organizers still retained an all-time favourite showcase by the SAF Red Lions in the segment.[2]

For the first time, NDP 2007 was recorded in 3D. However, it would not be broadcasted in 3D. Instead, for the first time in local television history, the 'live' telecast of the parade was in True High Definition and 5.1 Surround Sound on MediaCorp TV HD5. 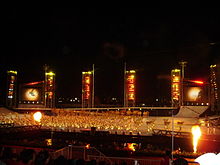 The Marina Bay Floating Platform at night during the preview show. 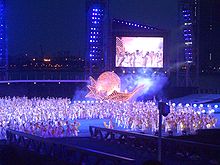 The 2007 parade deployed a combination of water and laser effects, as well as pyrotechnics.

As in previous years, Singaporeans had to e-ballot to obtain tickets for the preview and parade. Applications for e-balloting were made through SMS, telephone, the Internet, and self-service automated payment machines such as "AXS" or Self-service Automated Machines ("SAM").

Nearly 470,000 applications were received when the 10-day application period ended on 28 May. This was the second highest record since the e-balloting system was launched in 2003.

The National Day Parade 2007 Funpack was named the Assembly Bag. For the first time, a professional designer, Hanson Ho, was commissioned to create the bag.

The bag comprised strips of fabric panels which can be detached and reassembled. Spectators could create their own design and customise the bags into different sizes by trading panels among themselves.

A total of 160,000 bags were given away to spectators during the three NDP previews, full dressed rehearsal and on August. There were altogether 28 items in the funpack. Some of the items in the bag included a light-emitting electrical fan by Akira, a range of sun visors and a white panel strip.

For the first time in NDP history, there were two official theme songs instead of one. The first theme song was "There's No Place I'd Rather Be" performed by Kit Chan. The other song, "Will You", was performed by eight local singers of different music genres: Janani Sridhar, Asha Edmund, Emma Yong, Lily Anna Rahmat, Jai Wahab, Shabir Mohammaed, Sebastian Tan and Gani Karim. Both songs were composed by singer-composer Jimmy Ye.

Unlike previous years, there were no Mandarin versions of the theme songs.

The theme song "There's No Place I'd Rather Be" was originally written by Jimmy Ye for Singapore Polytechnic's Musical Superstar: The Pop Musical and was originally sung by Project SuperStar finalist, Kelly Poon.

During the celebration period, residents were encouraged to hang the national flag. The national flag was also allowed to be flown outside government buildings and private properties.

However, hanging flags on vehicles was prohibited at all times. In recent years, the Singapore Government allowed mini flags to be flown on taxis, buses and private vehicles. In 2006, 10,000 taxis and 2,500 buses from ComfortDelGro (Citycab, Comfort Taxi and SBS Transit) were selected to fly a mini version of the nation's flag on it.[3] Private vehicles were also allowed to fly mini flags or put stickers featuring the nation's flag on their vehicles.

In the event of a chemical or bomb attack, the Singapore Civil Defence Force and Singapore Police Force had prepared stations outside the stadium as a precaution. Evacuation routes were planned and if such an attack were to happen, spectators were able to evacuate in an orderly manner. Sharp items such as knives and scissors were not allowed into the stadium and were confiscated. For security reasons, X-ray scanners and metal detectors were put in place at the stadium.

Since the parade was held by the bay, waterways in the bay were out of bounds to the usual sea craft and bumboats ferrying tourists along Singapore River.

In 2007, the web committee picked 3 bloggers (known as the NDP Anchor Bloggers) through a nationwide search, to blog about topics relating to the Singapore culture. There are a total of 12 weeks and 12 different topics. The public will then take part in a competition, known as Blog Battle, and blog about the same topic, and the committee will then shortlist the top entries of the week. The public will get to choose their favorite entry and pick the winner.

The winner and winning voter will win home Samsung products.