The Chavín were a civilization that developed in the northern Andean highlands of Peru from 900 BC to 200 BC. They extended their influence to other civilizations along the coast.[1][2] The Chavín were located in the Mosna Valley where the Mosna and Huachecsa rivers merge. This area is 3150 meters above sea level and encompasses the quechua, jalca, and puna life zones.[3]

The most well-known archaeological site of the Chavín era is Chavín de Huántar, located in the Andean highlands north of Lima. It is believed to have been built around 900 BC and was the religious and political center of the Chavín people.[3] It has been designated a UNESCO World Heritage Site.

The chief example of architecture is the Chavín de Huantar temple. The temple's design shows complex innovation to adapt to the highland environments of Peru. To avoid the temple's being flooded and destroyed during the rainy season, the Chavín people created a successful drainage system. Several canals built under the temple acted as drainage. The Chavín people also showed advanced acoustic understanding. During the rainy season, water rushed through the canals and created a roaring sound. The temple appeared to be roaring like a jaguar, a sacred animal. The temple was built of white granite and black limestone, neither of which is found near the Chavín site. This meant that leaders organized many workers to bring the special materials from far away rather than use local rock deposits.

The Chavin civilization also demonstrated advanced skills and knowledge in metallurgy, soldering, and temperature control. Chavin used early techniques to develop refined gold work. The melting of metal had been discovered at this point and was used as a solder.[4]

The people domesticated camelids, such as llamas. Camelids were used for pack animals, for fiber, and for meat. The Chavin produced ch'arki, or llama jerky.[5] This product was commonly traded by camelid herders and was the main economic source of the Chavin people. Chavin people also successfully cultivated several crops, including potatoes, quinoa, and maize. They developed an irrigation system to assist the growth of these crops.[6] 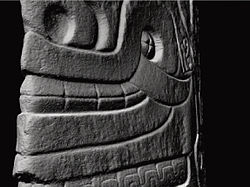 The Lanzón Stela at Chavín, still image from a video of a photo-textured point cloud using laser scan data collected by nonprofit CyArk

A general study of the coastal Chavín pottery with respect to shape reveals two kinds of vessels: a polyhedrous carved type and a globular painted type.[7] Stylistically, Chavín art forms make extensive use of the technique of contour rivalry. The art is intentionally difficult to interpret and understand, since it was intended only to be read by high priests of the Chavín cult, who could understand the intricately complex and sacred designs. The Raimondi Stela is one of the major examples of this technique.

Chavin art decorates the walls of the temple and includes carvings, sculptures and pottery. Artists depicted exotic creatures found in other regions, such as jaguars and eagles, rather than local plants and animals. The feline figure is one of the most important motifs seen in Chavin art. It has an important religious meaning and is repeated on many carvings and sculptures. Eagles are also commonly seen throughout Chavin art. There are three important artifacts which are the major examples of Chavin art. These artifacts are the Tello Obelisk, tenon heads, and the Lanzon.

Tello Obelisk is a giant sculpted shaft which features images of plants and animals. It includes caymans, birds, crops, and human figures. The large artifact may portray a creation story. Tenon heads are found throughout Chavin de Huantar and are one of the most well-known images associated with the Chavin civilization. Tenon heads are massive stone carvings of fanged jaguar heads which project from the tops of the interior walls.

Possibly the most impressive artifact from Chavin de Huantar is the Lanzon. The Lanzon is a 4.53-meter-long, carved granite shaft displayed in the temple. The shaft extends through an entire floor of the structure and the ceiling. It is carved with an image of a fanged deity, the chief cult image of the Chavin people.[8] 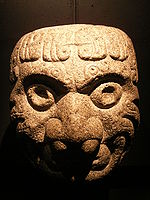 A Chavin stone art in the shape of a head.

The nature-based iconography of anthropomorphic figures which utilizes a feline theme is one of the broad and characteristic traits of Chavín culture.[9] A few deities appear to be a part of the Chavín religion, as they appear frequently in the iconography. The main deity is characterized by long fangs and long hair made of snakes. This is the god that is believed to be responsible for balancing opposing forces.

Chavin religion involved human transformation or shape shifting, aided by the use of hallucinogenic drugs. Many sculptures have been recovered showing the transformation from a human head to a jaguar head. Carvings depict similar images. The archeological record indirectly supports the culture's use of psychotropic drugs for religious purposes. San Pedro cacti exist in the area and are known to have hallucinogenic effects. The cactus is frequently depicted in the iconography, particularly of the staff god, who is shown holding the cactus as a staff.

Another indirect sign that psychotropic drugs may have been used is through the anthropomorphic iconography characteristic of Chavín. Small mortars, possibly used to grind vilca (a hallucinogenic snuff), have been uncovered. With them have been bone tubes and spoons decorated with wild animals, which may be associated with shamanistic transformations. Artwork at Chavín de Huantar show figures with mucus streaming from their nostrils (a side effect of vilca use) and holding what is interpreted to be San Pedro cacti. Scholars use such evidence to suggest that psychotropic drugs may have been used at Chavín.[1]

The Chavín culture had a wide sphere of influence throughout surrounding civilizations. For example, Pacopampa, located north (about a 3-week trek) of Chavín de Huántar, has renovations on the main temple that are characteristic of Chavín culture. Caballo Muerto, a coastal site in the Moche Valley region, has an adobe structure created during renovation of the main temple, the adobe related to Chavín influence. Garagay, a site in the modern-day Lima region, has variations of the characteristic Chavin iconography, including a head with mucus coming from the nostrils. At the site of Cerro Blanco, in the Nepena valley, excavations revealed Chavín ceramics.

The Chavín culture did not appear to undertake warfare; the archaeological evidence does not support the hypothesis that warfare did exist. Evidence of warfare has been found only in contemporaneous sites that were not influenced by Chavín culture. Almost as if those other civilizations were defending themselves via warfare from the Chavín sphere of influence that was taking place in a cultural sense.[1]

Chavín as a style, and probably as a period, is widespread, stretching from Piura on the far north coast to Paracas on the south coast; and from Chavín in the north highlands to Pucara in the south highlands.[10]

Some scholars argued that the development of Chavín social complexities coincided with the cultivation of maize and development of agricultural surpluses. Through an analysis of carbon isotope in the human bones found at Chavín sites, researchers have proved that the diet consisted mainly of C3 foods such as potatoes and quinoa, while maize, a C4 food, was not a part of the main diet. Potato and quinoa were crops better adapted to the Chavin environment. They are more resistant to the frost and irregular rain fall associated with high-altitude environments. Maize would not have been able to thrive in such conditions.[2]

The Chavin Horizon has three ceramic stages. They were originally identified through stratified ceramics, but have come to encompass three stages of development for the Chavín culture. *Urabarriu, the first stage, extends from 900 to 500 BC. During this time at Chavín de Huántar, two small residential areas, not located directly surrounding the ceremonial center, housed a few hundred people in total. This phase showed the greatest animal diversity. The people hunted mainly cervid and began to hunt and use camelids. They ate clams and shellfish from the Pacific Ocean, as well as guinea pigs and birds. Chavin people grew some maize and potatoes during this phase.[5] The ceramics in the Urabarriu stage are highly influenced by other cultures.[1] The archeological evidence suggests dispersed centers of production for ceramics, probably in response to a low demand from the dispersed population.[11]

The Raimondi Stela from the Chavín Culture, Ancash, Peru

At Chavín, power was legitimized through the belief in the small elite having a divine connection; shamans derived power and authority from their claim to a divine connection. The community believed in and had a desire to connect with the divine. With asymmetrical power, there is often evidence of the manipulation of traditions. Strategic manipulation is a vehicle of change which shamans could use to produce authority. During the Chavín horizon, large changes were taking place.[12][13]

"The greater degree of elaboration of persuasion evident in the rites, materials, and settings of the belief system, the more likely that, not only were the leaders aware of being self-serving in their actions, but also they were actually conscious of the trajectory change." [12] The archeological evidence shows several examples of reinterpretation, use of psychotropic drugs, and landscape altering. It also shows the complex planning and construction of stone-walled galleries.[12]

The concept of invented tradition refers to a situation in which outside elements are newly brought together to depict a seemingly old tradition. This can be seen generally in the architecture at Chavín de Huántar, which bring together many aspects of outside cultures to create a unique new, yet traditional appearance.[12][13][14]

The use of psychotropic drugs introduces a medium for manipulation. Only indirect evidence supports the use of psychotropic drugs, as noted above. Scholars have not been able to determine, if the San Pedro cactus was ingested, who consumed the cactus: only the shaman elite, or more widespread among the masses. If the masses were taking the cactus, they would be more susceptible to the influences of the shamans. If the shamans were the only ones to consume it, the practice may have been sacred and a status symbol. The shamans would be perceived to have special powers to connect with the nature and the divine.[12][13]

The extensive degree of landscape altering at Chavín de Huántar for temple reconstructions shows that someone or a group of people had the power to plan the reconstructions and influence others to carry out those plans. The large constructions that occurred at this site support the hypothesis of asymmetrical power.[12][13]

Finally, the planning and construction of the stone-walled galleries, in particular, suggest a hierarchical system. In addition to the requirement to command and direct the manpower required, the galleries show unique planning. They allowed only one entrance; this is atypical of the time, when rooms commonly had multiple entrances and exits. The iconography on the walls of the stone galleries is highly complex. The complexity suggests that only a select few people were able to understand the iconography; such people would serve as translators for the few others who were privileged to view the stone galleries. The limited access, both physically and symbolically, of the stone-walled galleries supports the existence of a shaman elite at Chavín de Huántar. The evolution of authority at Chavín appears to have resulted from a planned strategy by the shamans and those who planned and constructed the ceremonial center.[12]