The Nokia 5210 is a mobile phone manufactured by Nokia. The 5210 features rubber Xpress-On shells, WAP over CSD and a built in thermometer. The thermometer displays the internal temperature of the phone's battery. This feature is also present on other phones that have "netmonitor" enabled.

Like most Nokia's phones, users can customize the case easily from its original colors: blue or orange mixed with silver and black. The screen's LED color is orange.

Some calling features of the phone are Last Number Redial, Speed Dial, Conference Call, and Call Waiting. The basic calling features such as Hold, Un-hold, End all calls, Mute and Transfer are available as well. Productivity tools and utilities are available such as Calculator, Countdown Timer, Stopwatch, Thermometer, and Calendar.

Some versions of the Nokia 5210 firmware, particularly the Arabic models, contains a bug with the Arabic language text, that occurs when user tries to type SMS, the space between words in Arabic becomes a small rectangular symbol instead of a space.[citation needed] 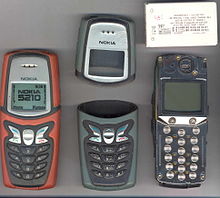