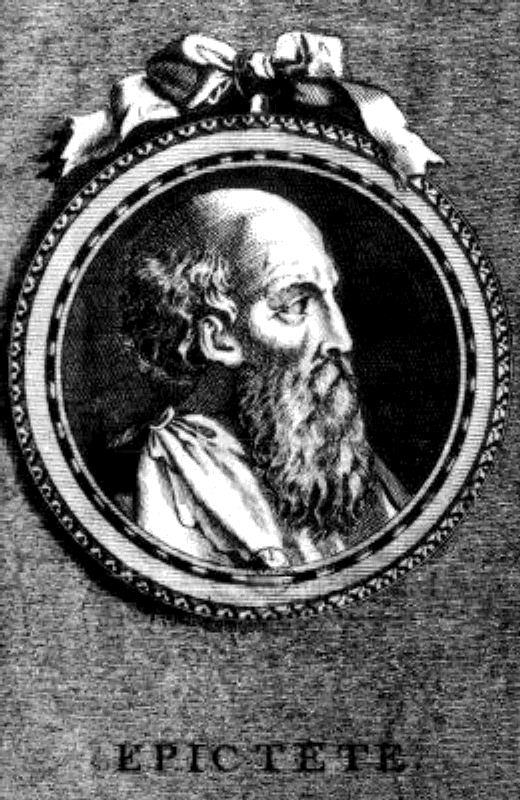 Epictetus (Greek: polytonic|Ἐπίκτητος; ca. 55&ndash;ca. 135) was a Greek Stoic philosopher. He was probably born a slave at , (present day , ), and lived in until his exile to in northwestern , where he lived most of his life and died. His teachings were noted down and published by his pupil in his "Discourses". Philosophy, he taught, is a way of life and not just a theoretical discipline. To Epictetus, all external events are determined by fate, and are thus beyond our control, but we can accept whatever happens calmly and dispassionately. Individuals, however, are responsible for their own actions which they can examine and control through rigorous self-discipline. As part of the universal city that is the universe, human beings have a duty of care to all fellow humans. The person who followed these precepts would achieve happiness.

Epictetus was born c. 55 AD, [His year of birth is uncertain. He must have been old enough to teach philosophy by the time Domitian banished all philosophers from Rome c. 93 AD. He also describes himself as an old man to Arrian c. 108 AD. cf. [http://classics.mit.edu/Epictetus/discourses.html "Discourses"] , i.9.10; i.16.20; ii.6.23; etc.] at Hierapolis, Phrygia. [Suda, "Epictetus".] The name given by his parents, if one was given, is not known—the word "epiktetos" in Greek simply means "acquired." He spent his youth as a slave in Rome to Epaphroditus, a very wealthy of . Epictetus studied philosophy under , [Epictetus, [http://classics.mit.edu/Epictetus/discourses.html "Discourses"] , i.7.32.] as a slave. [Epictetus, [http://classics.mit.edu/Epictetus/discourses.html "Discourses"] , i.9.29.] It is known that he became crippled, and although one source tells that his leg was deliberately broken by Epaphroditus, [Origen, [http://www.earlychristianwritings.com/text/origen167.html "Contra Celcus. vii.] ] more reliable is the testimony of Simplicius who tells us that he had been lame from childhood.

It is not known how Epictetus obtained his freedom, but eventually he began to teach at Rome. Around 93 AD banished all philosophers from Rome, and ultimately, from , [Suetonius, [http://www.fordham.edu/Halsall/ancient/suet-domitian-rolfe.html "Domitian"] , x.] and Epictetus traveled to in Epirus, , where he founded a philosophical school. [Aulus Gellius, "Attic Nights", xv. 11.]

His most famous pupil studied under him as a young man (c. 108 AD) and claims to have written the famous "Discourses" based on his lecture notes, although some scholars argue that they should rather be considered an original literary composition by Arrian comparable to the Socratic literature. [Hendrik Selle: "Dichtung oder Wahrheit – Der Autor der Epiktetischen Predigten". Philologus 145 [2001] 269-290] Arrian describes Epictetus as being a powerful speaker who could "induce his listener to feel just what Epictetus wanted him to feel."

He lived a life of great simplicity, with few possessions. He lived alone for a long time, [Simplicius, "Commentary on the Enchiridion", 46. There is also a joke at Epictetus' expense in Lucian's [http://www.gutenberg.org/etext/6829 "Life of Demonax"] about the fact that he had no family.] but in his old age he adopted a friend's child who would otherwise have been left to die, and raised it with the aid of a woman to help him. [Simplicius, "Commentary on the Enchiridion", 46. He may have married her, but Simplicius' language is ambiguous.] He died sometime around 135 AD. [ He was apparently alive in the reign of (117-138). (born 121 AD) was an admirer of him but never met him, and ( [http://penelope.uchicago.edu/Thayer/E/Roman/Texts/Gellius/2*.html#18.10 ii.18.10] ) writing mid century, speaks of him as if belonging to the recent past.] After his death his lamp was purchased by an admirer for 3000 e. [Lucian, [http://www.gutenberg.org/etext/6829 "Remarks to an illterate book-lover"] .]

So far as is known, Epictetus himself wrote nothing. All that remains of his work was transcribed by his pupil (author of the ). The main work is "The Discourses," four books of which have been preserved (out of an original eight). [Photius, "Bibliotheca", states that there were eight books.] Arrian also compiled a popular digest, entitled the "Enchiridion", or "Handbook". In a preface to the "Discourses," addressed to Lucius Gellius, Arrian states that "whatever I heard him say I used to write down, word for word, as best I could, endeavouring to preserve it as a memorial, for my own future use, of his way of thinking and the frankness of his speech".

Epictetus focused more on ethics than the early had. Repeatedly attributing his ideas to Socrates, he held that our aim was to be masters of our own lives. The role of the Stoic teacher, according to Epictetus, was to encourage his students to learn, first of all, the true "nature of things", which is invariable, inviolable and valid for all human beings without exceptions.

The "nature of things" is further partitioned into two categories: those things that are subject to our exclusive power ("prohairetic" things) and those things that are not subject to our exclusive power ("aprohairetic" things). The first category of things includes judgment, impulse, desire, aversion, etc. The second category of things, which can also be called "", includes health, material wealth, fame, etc. Epictetus then introduced his students to two cardinal concepts: the concept of and the concept of . Prohairesis is what distinguishes humans from all other creatures. It is the faculty that, according to our own judgments, makes us desire or avert, feel impelled or repel something, assent to or dissent about something. Epictetus repeatedly says that "we are our prohairesis". Dihairesis is the judgement that is performed by our Prohairesis, and that enables us to distinguish what is subject to our exclusive power from what is not subject to our exclusive power. Finally, Epictetus taught his students that good and evil exist only in our Prohairesis and never in external or aprohairetic things. The good student who had thoroughly grasped these concepts and employed them in everyday life was prepared to live the philosophic life, whose objective was "" ("an undisturbed and serene state of mind"). This meant fully understanding that we should not be affected by the external objects of our lives, because they are exclusively not up to us. This reasoning is in accordance with the knowledge of the true "nature of things," that is, the predetermined and complexly fixed order of the universe and the cosmos. This was Epictetus', and the Stoics', ideal model of , or "happiness and fulfillment."

The essence of Epictetus's psychology is revealed by two of his most frequently quoted statements:

We are disturbed not by events, but by the views which we take of them.

I must die. Must I then die lamenting? I must be put in chains. Must I then also lament? I must go into exile. Does any man then hinder me from going with smiles and cheerfulness and contentment?

The final entry of the "Enchiridion", or "Handbook"; which is Arrian's anthology of quotes by Epictetus, begins "Upon all occasions we ought to have these maxims ready at hand":

Conduct me, Zeus, and thou, O Destiny, Wherever thy decree has fixed my lot. I follow willingly; and, did I not, Wicked and wretched would I follow still. ( quoting ; quoted also by Seneca, Epistle 107.)"

Whoe'er yields properly to Fate is deemed Wise among men, and knows the laws of Heaven. (From ' Fragments, 965)

Anytus and Meletus may indeed kill me, but they cannot harm me. (From Plato's "Apology")

The philosophy of Epictetus was an influence on the Roman Emperor Marcus Aurelius (121 to 180 A.D.) whose reign was marked by wars with the resurgent ns in southern and against the Germanic tribes in . Aurelius quotes from Epictetus repeatedly in his own work, "", written during his campaigns in central Europe.

When Bernard Stiegler was imprisoned for five years for armed robbery in , he assembled an "ensemble of disciplines" which he called (in reference to Epictetus) his "melete". This ensemble amounted to a practice of reading and writing which Stiegler derived from the writings of Epictetus. This led to his transformation, and upon being released from incarceration he became a professional philosopher. [Bernard Stiegler, "Passer à l'acte" (Paris: Galilée, 2003). An extract from this work has been published in translation as "Philosophising By Accident," "Public" 33 (2006). ]

Epictetus is mentioned in "" by James Joyce. In the fifth chapter of the novel the protagonist Stephen Daedalus discusses Epictetus's famous lamp with a Dean of his college: "-Epictetus also had a lamp, said the dean, which was sold for a fancy price after his death. It was the lamp he wrote his philosophical dissertations by. You know Epictetus? / -An old gentleman, said Stephen coarsely, who said that the soul is very like a bucketful of water. / -He tells us in his homely way, the dean went on, that he put an iron lamp before a statue of one of the gods and that a thief stole the lamp. What did the philosopher do? He reflected that it was in the character of a thief to steal and determined to buy an earthen lamp next day instead of the iron lamp" (pgs. 202-203 of the Penguin Edition). Epictetus reoccurs several times throughout this chapter.

Epictetus is mentioned briefly in "" by J. D. Salinger. At one point Franny says: "I sat and I sat, and finally I got up and started writing things from Epictetus all over the blackboard. I filled the whole front blackboard--I didn't even know I'd re"mem"bered so much of him. I erased it--thank God!--before people started coming in. But it was a childish thing to do anyway--Epictetus would have absolutely "hated" me for doing it--but..."

Epictetus is referred to, but not mentioned by name, in Arnold's "To a Friend." Arnold provides three historical personalities as his inspiration and support in difficult times, (Epictetus is preceded by and succeeded by ):

Much he, whose friendship I not long since won,
That halting slave, who in Nicopolis
Taught Arrian, when Vespasian's brutal son
Cleared Rome of what most shamed him. [Matthew Arnold, [http://www.poetry-online.org/arnold_to_a_friend.htm "To A Friend"] ]

The philosophy of Epictetus plays a key role in the 1998 novel by Tom Wolfe, "". This was in part the outcome of discussions Wolfe had with James Stockdale (see above). The importance of Epictetus' Stoicism for Stockdale, its role in "", and its significance in "" is discussed by William O. Stephens [ [http://puffin.creighton.edu/phil/bill.htm William O. Stephens, Ph.D ] ] in "The Rebirth of Stoicism?" [ [http://puffin.creighton.edu/phil/Stephens/rebirth_of_stoicism.htm The Rebirth of Stoicism ] ]

Psychologist Albert Ellis, the founder of , credited Epictetus with providing a foundation for his system of . [ [http://www.newyorker.com/archive/2003/10/13/031013ta_talk_green Ageless, Guiltless, by Adam Green] .] [ [http://news.independent.co.uk/people/obituaries/article2816649.ece Obituary by Morton Schatzman in "The Independent"] .] [ [http://www.guardian.co.uk/obituaries/story/0,,2146455,00.html Obituary by Oliver Burkeman in "The Guardian"] .]

*
* [http://www.utm.edu/research/iep/e/epictetu.htm Epictetus] entry at The Internet Encyclopedia of Philosophy
* [http://books.google.com/books?ie=ISO-8859-1&id=VGz_OMkbZPwC&jtp=126 "Dialogue between Hadrian and Epictetus"] - a fictitious 2nd or 3rd century composition, translated into English in "" magazine, August 1857