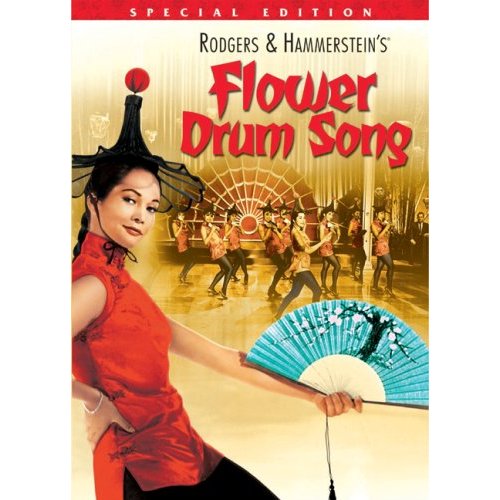 Flower Drum Song is a 1961 film adaptation of the 1958 Broadway musical play "", written by composer and lyricist/librettist . The film and stage play were based on the 1957 novel of the same name by author C.Y. Lee. The movie was unusual in featuring nearly all cast members (one of the few speaking Caucasian parts being a ), including dancers, though most singing voices were not by Asian talent. Starring were , , , , and original Broadway cast members , and .

Among various changes for the film, the song "Like a God" was changed from a song into a beat poetry presentation. The singing voice of the character Linda Low was B. J. Baker, a non-Asian studio backup singer who worked with , , , the and , among others. "Love, Look Away" was also dubbed, by opera singer .

A young woman named Mei Li arrives as an from with her father to to enter into an with the owner of a night club, Sammy Fong (inspired by the actual Forbidden City nightclub). Her intended is already involved with his leading , Linda Low, and does his best to dissuade Mei Li from marrying him, sending her to live in the house of Master Wang, where he presents her as prospect for Master Wang's son, Wang Ta. Dissolving the marriage contract is harder than either of them imagine. Master Wang is persuaded by his sister-in-law, Madame Liang, to allow Mei Li to fall in love naturally with Master Wang's son, Wang Ta. But Wang Ta is dazzled by the charms of Linda, who 'enjoys being a girl', and succeeds in landing a date with her, during which she convinces him to give her his fraternity pin (it symbolizes that they're "going steady"). Linda wishes to use Wang Ta to get a real commitment from Sammy Fong, who gets wind of her plan when Linda attends a party in honor of Wang Ta's and Madame Liang's graduation from university and citizenship classes, respectively. At the party, Linda has another club employee pretend to be her brother, and grant his permission for Linda to marry Wang Ta. Mei Li, hearing this, becomes discouraged, while Ta and his father argue over his marriage plans. Ta argues that he is old enough to make his own decisions, but the father says that he will be the one to let Ta know when he is old enough.

Sammy, in an effort to keep Linda from marrying Wang Ta, arranges to have Wang Ta (and his family) see her nightclub act, where he is shocked at her performance. He leaves, distraught, accompanied by friend since childhood, the seamstress Helen Chao, who also grew up in America and deeply loves Wang Ta. Ta becomes drunk in his misery over Linda, and Helen ends up letting him stay for the night in her apartment. She sings "Love Look Away", about her unrequited love. In the morning, Mei Li comes to deliver a burned coat for Helen to mend, and becomes distressed when she discovers Wang Ta's clothing in Helen's kitchen. When Wang Ta wakes up (seconds after Mei Li leaves), he still does not notice Helen's affections, even as she pleads for him to stay, and he leaves quickly. He goes to speak with Mei Li, now realizing his father was right, and that she is a better match for him than the man trap Linda Low, only to have Mei Li reject him, saying that she once loved him, but not anymore. She and her father leave Master Wang's house and pursue the marriage contract between Mei Li and Sammy Fong. This is unfortunate in that Sammy has already proposed to Linda, but now will be unable to marry her (the contract is binding). Before the wedding, Wang Ta goes to see Mei Li, and they both realize that they are deeply in love with one another. They agree to try to come up with a way to get Mei Li out of her marriage contract.

The day of the wedding, right before she is to sip from a goblet (which would seal her marriage to Sammy), Mei Li declares that because she is an illegal immigrant, the contract is null and void. Wang Ta can thus marry Mei Li, and Sammy decides to marry Linda right there as well, resulting in a double wedding. Helen ends up empty handed (in fact, she does not appear again after Wang Ta leaves her apartment). In the novel, Ta's rejection actually leads her to commit suicide.

I Enjoy Being a Girl

Although "Flower Drum Song" is not one of the most successful of the Rodgers & Hammerstein musicals, its song "I Enjoy Being A Girl" has been widely used in other movies. The song has become familiar to many Americans, perhaps most recently with in a nationally broadcast Gap commercial. It was covered by folksinger . As of October 2006, there were 13 versions of the song on , including performances by and parodies based on and "".

The movie was available for broadcast on television, and perhaps the largest number of people remember this film from television. It was released on VHS video during the 1990s, and unavailable subsequently for many years while most of the other video versions of Rodgers and Hammerstein movies were released on DVD by other studios. Clips from this movie have appeared on internet video sharing sites. At present, (via their acquisition of ) owns the theatrical and television rights to this film, as well as other certain Rodgers and Hammerstein properties, while original distributor Universal owns only the home video rights (Universal also holds the film's copyright). Universal Studios Home Entertainment (in association with the estates of Rodgers and Hammerstein) finally released a DVD version on , with extra features on the making and casting of the movie. It includes interviews of Henry Hwang, Pat Suzuki, and Nancy Kwan, and pictures from the 1958 and 2002 rehearsals and practice sessions, as well as pictures of Rodgers, Hammerstein, and Fields. The movie soundtrack was released, first on LP, and more recently, on CD.