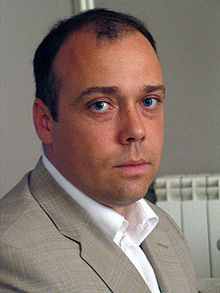 Milan Marković is a Serbian lawyer, professor and politician. He is the Minister of Human and Minority Rights, Public Administration and Local Self-Government in the Government of Serbia.[1] He was president of the Palilula municipality from 2000 to 2004. He has been an MP in Serbian Parliament since 2001. From 2003 to 2007 he was deputy speaker in Serbian parliament. He was member of managing boards in PKB and Prva Petoletka companies. He was city deputy from 2000 until 2004.

Marković was born in Belgrade in 1970. He teaches at the Faculty of Security of Belgrade University and is an associate in research projects. He speaks English.