The museum's principles incorporate the concepts of unified collections; the narratives of culture and place; the idea of forum; the bicultural partnership between Tangata Whenua and Tangata Tiriti; and an emphasis on diversity and multidisciplinary collaboration.

For Te Papa's version of their history see their website

The first predecessor of Te Papa was the Colonial Museum, founded in 1865, with James Hector as founding director. It was built on Museum Street.[1] Halfway through the 1930s the museum moved to a new building in Buckle Street, where the National Art Gallery of New Zealand was also housed.

Eru D. Gore was secretary-manager from 1936 till his death in 1948 when Stewart Bell Maclennan was appointed the first director. This was the first appointment in New Zealand of a full-time art gallery director. Past directors of Gallery include:

In the early 1990s Hamish Keith was involved in a public dispute about his role in the National Art Gallery of New Zealand's controversial purchase of two paintings by Charles Goldie.

Te Papa was established in 1992, by the Museum of New Zealand Te Papa Tongarewa Act 1992.[4] The official opening took place on 14 February 1998 in a ceremony led by Sir Peter Blake, Prime Minister Jenny Shipley, and two children. The first Chief Executive of the Museum was Dame Cheryll Sotheran. Māori traditional instrumentalist Richard Nunns co-led the musicians at a dawn ceremony on opening day.[5]

The museum had one million visitors in the first five months of operation, and between 1 and 1.3 million visits have been made in each subsequent year. In 2004, more space was devoted to exhibiting works from the New Zealand art collection in a long-term exhibition called Toi Te Papa: Art of the Nation.

Filmmakers Gaylene Preston and Anna Cottrell documented the development of Te Papa in their film Getting to Our Place.[12]

The main Te Papa building is on the waterfront in Wellington, on Cable Street. Inside the building are six floors of exhibitions, cafés and gift shops dedicated to New Zealand's culture and environment. The museum also incorporates outdoor areas with artificial caves, native bushes and wetlands. A second building on Tory Street is a scientific research facility and storage area, and is not open to the public.

Te Papa was designed by Jasmax Architects[13] and built by Fletcher Construction.[14] The 36,000 square metre building had cost NZ$300 million by its opening in 1998. Earthquake strengthening of the Cable Street building was achieved through the New Zealand-developed technology of base isolation[15] - essentially seating the entire building on supports made from lead, steel and rubber that slow down the effect of an earthquake.

The site was previously occupied by a modern five-storey hotel. This was jacked off its foundations onto numerous rail bogies and transported 200 metres down and across the road to a new site, where it is now the Museum Hotel.

The body of the colossal Squid on permanent display at the museum.

There are significant collections of fossils and archaeozoology; a herbarium of about 250,000 dried specimen; a collection of about 70,000 specimen of New Zealand birds; significant amphibians, reptiles and mammals.

The museum has the world's largest specimen of the rare colossal squid (Mesonychoteuthis hamiltoni,). It is 500 kilograms (1,100 lb) and 33-foot (10 m) long. The squid arrived at the museum in March 2007 after being captured by New Zealand fisherman in the Ross Sea off Antarctica.[18]

The Archives are located in a separate building at Tory Street and are open for researchers on appointment. There are two categories of archive collections:

Te Aka Matua Library, previously a publicly accessible library, is now open only to researchers by appointment between 10am-5pm, Monday-Friday. The library is a major research and reference resource, with particular strengths in New Zealand, Māori, natural history, art, photography and museum studies. It is located on the fourth floor of the main building.

Te Papa has a mixture of long term exhibitions of cultural objects, hands-on and interactive exhibitions, cultural spaces and touring exhibitions. The long term exhibitions of cultural objects focus on New Zealand history, Māori culture and New Zealand's natural world. The hands-on and interactive exhibitions focus on engaging particularly young visitors and include both indoor areas and out-door areas built and planted for the purpose. The key cultural space is the Te Hono ki Hawaiki marae with very impressive whakairo.[19]

All permanent exhibitions are free. Many of the touring exhibition are ticketed, but there are occasional free days[20]

The museum has sometimes been the centre of controversy. The siting of significant collections at the water's edge on reclaimed land next to one of the world's most active earthquake fault lines has resulted in concern by some people. There has been criticism of the 'sideshow' nature of some exhibits (primarily the Time Warp section, which has since closed). There has also been criticism that some exhibits were not given due reverence. For example, a major work by Colin McCahon was at one stage juxtaposed with a 1950s refrigerator in a New Zealand culture exhibition.[21]

In March 1998 a 7 cm high statue of the Virgin Mary sheathed in a condom called Virgin in a Condom, an art work by Tania Kovat attracted protests by Christians.[22]

In December 2005, Te Papa announced a postponement to the long term Toi Te Papa: Art of The Nation exhibition, that was to coincide with the Wellington Arts Festival. The museum instead repeated a Lord of the Rings exhibition while not updating their website to reflect the change. This caused outrage amongst many in the New Zealand art community.

In October 2006, the New Zealand Defence Industry Association held their annual conference at Te Papa for the fourth consecutive year. Protesters blockaded the front entrance of the museum, preventing access to visitors. In a similar protest the previous year twenty people were arrested. 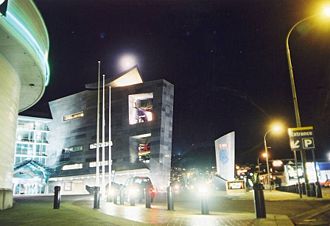 The museum's logo, a thumbprint, caused considerable controversy when it was publicised that its development had cost $300,000 - which was actually the cost of the entire branding effort.

New Zealand art commentator Hamish Keith has been a consistent critic of Te Papa at different times referring to it as a "theme park", the "cultural equivalent to a fast-food outlet" and "not even a de facto national gallery" [23]

In August 2011 a collections manager of Maori artifacts at Te Papa - Noel James Osborne - avoided a charge of domestic assault after claiming it would hamper his international travel for the museum.[24][25]