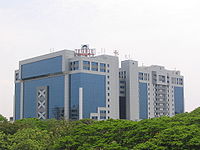 Tidel Park, one of the largest software parks in India 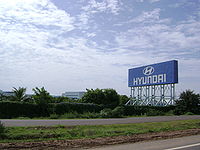 The Chennai Port, one of the biggest in South Asia

Chennai has a diversified economic base anchored by the automobile, software services , medical tourism, hardware manufacturing and financial services. Other important industries include petrochemicals, textiles and apparels.[1] The Chennai Port and Ennore Port contribute greatly to its importance. The city has a fully computerised stock exchange called the Madras Stock Exchange. Chennai has the fourth largest Gross Metropolitan Product in India.

Chennai was recently rated as having the highest quality of life among Indian cities ahead of the other three metros and Bangalore, based on the "Location Ranking Survey" conducted by ECA International. Chennai has improved its global ranking to 138 in 2006–07 from 179 in 2002–03. It is now ranked at 26th position in Asia in terms of livability, up from 31st rank in 2002–03.[2] According to a 2007 worldwide quality of life survey done by Mercer, Chennai received the second highest rating in India,[3] with New Delhi scoring the highest,[3] and came in at a relatively low 177th worldwide.[3] The reason was attributed to poor health and sanitation, and the increasing air pollution.[4]

Since the late 1990s, software development and business process outsourcing and more recently electronics manufacturing have emerged as major drivers of the city's economic growth. Chennai has been rated as the most attractive Indian city for offshoring services according to A T Kearney's Indian City Services Attractiveness Index 2005.[5] Major software and software services companies like Accenture, Cognizant Technology Solutions, Capgemini, CSC, EDS, HCL, HP, IBM, Infosys, Satyam, Sun Microsystems, Symantec, TCS, Verizon, Wipro, CSS Corp and US Technology Resources have development centres in the city. The city is now the second largest exporter of IT and IT enabled Services in the country behind Bangalore. The IT Corridor, on Old Mahabalipuram Road in the southeast of the city houses several technology parks, and, when completed, will provide employment to close to 300,000 people. Besides the existing Tidel Park, two more Tidel Parks are on the anvil in the IT corridor. One is under construction at the Siruseri IT SEZ and the other one is being planned at the current location of MGR Film City which is just before the existing Tidel Park, in Taramani on the IT Corridor. A number of SEZ have emerged in and around Chennai. The Mahindra World City, New Chennai, a Special Economic Zone (SEZ) with one of the world's largest high technology business zones, is currently under construction in the outskirts of Chennai. It also includes the World's largest IT Park by Infosys.[6]

More recently, Chennai has emerged as an electronic manufacturing hub with multinational corporations like Dell, Nokia, Motorola, Cisco, Samsung, Siemens, Sony-Ericsson, Flextronics and Foxconn setting up Electronics / Hardware manufacturing plants, particularly in the Sriperumbudur electronics SEZ . Ericsson and Alcatel have research and development facilities in the city while Texas Instruments' R&D facility is in the pipeline. Semiconductor companies like SPEL and Tessolve have announced plans to set up or expand manufacturing and R&D centers in the city. Companies like Nokia, Flextronics, Motorola, Sony-Ericsson, Foxconn, Samsung, Cisco, and Dell have chosen Chennai as their South Asian manufacturing hub. Products manufactured include circuit boards and cellular phone handsets.[7] Ericsson also has a Research and Development facility in Chennai.[8] Big EPC companies have set up their Engineering centres which include Saipem I Project Services ltd, Technip, Foster Wheeler, Mott Mecdonald, Petrofac and Technimont, Austrian company "Austrian Energy and Environment" have also a design office here besides local giant ECC {Larsen & Toubro}. Sanmina-SCI is the latest company to invest in Chennai to create a state of the art manufacturing facility.[9] Nokia Siemens Networks has decided to build a manufacturing plant for wireless network equipment in Chennai.[10]

The logo of the Indian Overseas Bank, one of the many operating banks in Chennai

Chennai is an important centre for banking and finance. At present it is home to three large national level commercial banks and many state level co-operative banks. Several large financial companies and insurance companies are headquartered in Chennai. Many Indian banks, multi-national banks and the World Bank have located their back office operations in the city. The city serves as a major back up centre for operations of many banks and financial companies in India.

Chennai leads in the health care sector and is considered the Health Capital of India. Home to some of India's best health care institutions such as Apollo Hospitals, the largest health care provider in Asia,[11] MIOT Hospitals, Sankara Nethralaya, Sri Ramachandra Medical Center, Fortis Healthcare, Sundaram Medical Foundation (SMF),Madras Medical Mission (MMM), Frontier Lifeline & K.M. Cherian Heart Foundation, Chettinad Health City and Adyar Cancer Institute, Chennai is a preferred destination for medical tourists from across the globe.[12] Some of the treatments sought after by the tourists include heart surgery, neurological problems, cancer, plastic surgery and orthopaedic procedures.[13] Chennai attracts about 45% of all health tourists arriving in India from abroad in addition to 30% to 40% of domestic tourists.[14]

Other major manufacturing facilities range from small scale manufacturing to large scale heavy industrial manufacturing, pertochemicals and auto ancillary plants. Chennai is a textile industry hub with a large number of apparel industries located in the Ambattur-Padi industrial zone in the northern suburbs of the city. The city also has a large leather apparel and accessory industry. SEZ's for apparel manufacture and footwear are under construction in the southern suburbs of the city. Chennai is the cradle for world renown madras shirts Madras (cloth)

Chennai, hosts the Madras Music Season, during the months of December and January, annually. It is the capital of the Carnatic Music and Bharatanatyam scene in India, and there are many venues in which artists perform throughout the city. There is also a large theatre scene and contemporary visual art scene in the city.

The city is home to the Tamil entertainment (motion pictures, television, and recorded music) industry which is the second largest in India after Bollywood. Because the film industry is largely centered around a local area called Kodambakkam, the Tamil film industry is popularly referred to as Kollywood.

Chennai Aero Park sucked up to become the largest integrated aerospace ecosystem in the world. The project is a pioneering initiative to mark India's entry into the global aerospace industry. The aero park will enable global players to design, manufacture and maintain all types of aircraft for both civilian and defense needs. It is to be established as a Public-Private Partnership (PPP) entity.

Already the city is home to more than 20 companies in the aerospace field. The establishment of this park will make chennai, the Aero City of India.