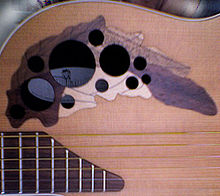 Ovation guitars are differentiated by their composite synthetic bowl, rather than the traditional wooden back and sides of the modern acoustic guitar as produced by luthiers starting in the late 18th century. Ovation has also produced solid body electric guitars and active basses.

The first Ovation guitar was developed in 1966 by Charles Kaman (1919-2011).[1][2] Kaman, an amateur guitarist from an early age, received his bachelors degree in aeronautical engineering from the Catholic University of America in Washington DC, and then worked on helicopter design as an aerodynamacist at United. Eventually he founded his own helicopter design company, Kaman Aircraft, in 1945. 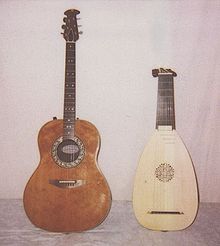 The Kaman Corporation soon diversified, branching off into nuclear weapons testing, commercial helicopter flight, the development and testing of chemicals, and helicopter bearings production. But in the early 1960s, financial problems due to the failure of their commercial flight division forced them to consider expanding into new markets, such as entertainment and leisure. Charles Kaman, still an avid guitar player, became interested in the making of guitars.[2]

Charles Kaman began experimenting with the guitars around 1964.[2] In 1964, Charlie chose a small team of aerospace engineers and technicians for the project (several of whom were woodworking hobbyists as well) and set them off to work. They were accustomed to doing things the Kaman way - identify the problem; explore the possible solutions; pick the best result and go with it. They discovered that the flat back of an acoustic guitar actually hindered the balance and projection.[3]

To pursue the goal of guitar making, Kaman founded Ovation Instruments, and in 1965 its engineers and luthiers began their quest to determine whether an acoustic guitar could be sonically improved by modifying its shape and construction. The R&D team spent months building and testing prototype instruments, and by mid 1966, they had the answers they sought. Their research conclusively proved that a semi-parabolic shape yielded the most efficient and responsive guitar body.

Once the engineers had settled on the body design, they turned their attention to developing a substance that could be molded into this bowl-like shape. Using their knowledge of high-tech aerospace composites, they developed Lyrachord, a patented material comprising interwoven layers of glass filament and bonding resin. The lab team also discovered how to tune Lyrachord at the molecular level so it would resonate musically.

The first successful design, built by luthier Gerry Gardner, went into production soon after the company was established.[4]

The first Ovation guitar made its debut in November, 1966. Its Lyrachord body gave the instrument unprecedented projection and ringing sustain.[5]

In 1965-1967, the Ovation Guitar Company did make a signature guitar for Josh White and that was the first made for an African American.[6][7][8][9] Blues singer Josh White was the first official Ovation endorser.[10]

Carol White would vividly recount to Josh's archival biographer, Douglas Yeager, that in 1963-1964, the engineers of a new guitar company in development, spent several months with their paperwork and drawings on her dining room table, as Josh and the engineers designed the first round-bodied guitar. Upon completion, the first Ovation Guitar was called the "Josh White Model".[11][12] According to the "Ovation Original Program" Josh White played the "Josh White Model" and the Balladeers played the "Balladeer Model" Ovation guitars at the Hotel America, Hartford, Connecticut, November 14 1966.[13]

"Ovation Instruments unveiled their new line of acoustical guitars at a reception and dinner held last month at the Hotel America, Hartford, Conn. In a program which featured demonstrations by Josh White, one of Americas best-known folk singers, and the Balladeers, a new, young, singing group; and remarks by Charles Kaman, president of Kaman Aircraft Corporation, parent company of Ovation Instruments, and Jim D. Gurley, program manager of Ovation Instruments, the features of the Ovation guitar models were presented to 300 representatives of the press and the music industry."

"Josh White, playing Ovation's "Josh White" model - declared to be the first guitar which the famous folk singer has ever endorsed - held the crowd spellbound. His thirty-minute performance brought forth every nuance of the instrument's unique capability to render clear treble and deep resonant bass notes. Closing the show with a family ensemble with his two daughters, Mr. White brought down the house. It was one of the rare occasions when he and his children, though all professionals, have played together as a group. Also featured were the Balladeers, a bright, young singing group from the Connecticut Valley..."[14]

The Ovation Roundback Balladeer first caught national attention in 1968 when Glen Campbell was the host of a show called the the Goodtime Hour on CBS, and a year later became one of Ovation's first endorsers.[2]

In 1972, Ovation introduced one of the first production solid body electric guitars with active electronics, the Ovation Breadwinner. The model failed to gain widespread popularity, however, and production of the Breadwinner and the Ovation Deacon ceased in 1980. Ovation made several other solid body models up until the mid 80s. Many of these guitars have become collector's items since only a few thousand were made of each model. Since that time the company's main focus has been acoustic and acoustic-electric guitars.

Other Ovation innovations include composite tops and multiple offset sound holes on guitar tops, pioneered in the Adamas model in 1977. Kaman Music has also sold budget guitars—and even mandolins and ukuleles—based on similar design principles to the Ovation such as the Korean-built Celebrity series and the Korean or Chinese-built Applause brand.

Ovations reached the height of their popularity in the 1980s, where they were more often than not seen during live performances by touring artists if acoustic guitars were being played. Ovation guitars' synthetic bowl and early use (1971) of preamps, onboard equalization and piezo pickups were particularly attractive to live acoustic musicians who constantly battled feedback problems from the high volumes needed in live venues.

Since the 1980s they have remained popular with studio musicians[citation needed], but are less frequently seen on stage.

While it was produced, the Ovation 1867 Legend was the recommended guitar in Robert Fripp's Guitar Craft.[16] Tamm (1990) wrote that the acoustic 1867 Legend has "a gently rounded super-shallow body design that may be about as close to the shape and depth of an electric guitar as is possible without an intolerable loss of tone quality. Fripp liked the way the Ovation 1867 fitted against his body, which made it possible for him to assume the right-arm picking position he had developed using electric guitars over the years; on deeper-bodied guitars, the Frippian arm position is impossible without uncomfortable contortions".