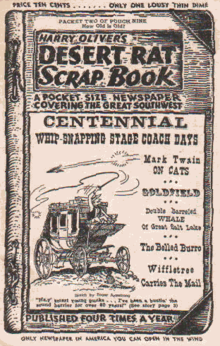 The Desert Rat Scrap Book (or DRSB) was a (roughly) quarterly, southwestern humor publication based in Thousand Palms, California. DRSB was published in editions of 10,000 to 20,000 copies, whenever its creator, Harry Oliver had sufficient material, and money enough to pay the printer. Forty-six issues were printed and distributed via Southern California bookstores and newsstands, and by mail worldwide. DRSB was devoted to lore, legends, lies and laughs of the American Southwest region, especially featuring prospectors and other desert rats. The publication was launched in late 1945 and ran through early 1967. For scans and transcriptions of some issues, see the Desert Rat Scrap Book archive.

PAGE ONE, rarely overprinted with one garish color, usually featured a Harry Oliver woodcut or a cartoon (sometimes by Walt Disney or Hank Ketcham), and would often announce a theme for that issue - see THEMES below. The issue contents might (or might not) generally follow that theme. In just a very few issues, a full-cover illustration would spread over both the first and last pages.

PAGE TWO would usually (but not always) contain the masthead and boilerplate, something like the following:

Following would be an 'editorial', various 'news' items and gags and aphorisms or factoids (original or clipped from other sources) under old-time fonts headings, interspersed with small block prints and/or cartoons of desert characters.

PAGE THREE usually contained more of the same, with some slightly longer text pieces, by Harry Oliver or other writers. Many of these items were recycled from previous Harry Oliver publications — Harry was his own best plagiarist.

PAGE FOUR had yet more of the same, often with even longer pieces (including a complete play once) that might address the issue's theme. Along the bottom of this largest page might be a few advertisements, for ghost towns and publications and date farms and rock shops.

PAGE FIVE, above the mailing address block, might contain a list of conversation starters, or more gags and news and quotes, or a promotion for Harry Oliver's audio album of readings, or maybe just a large woodcut and an essay or mini-epic poem.

Just one issue, Packet Four of Pouch Four, named DESERT RAT HARRY OLIVER'S JOKE BOOK, did not follow the above formats. This is a 32-page book (plus covers), sized about 5.5 x 8.5 inches, folded and stapled. The contents are primarily the usual short gags. The heading on page one says FIRST DESERT JOKE BOOK. This was apparently an unsuccessful experiment.

Each issue bore on the front cover the name of a supposed theme for that issue, such as: Desert Burros, Death Valley, Good Old Desert Fun, Ghost Towns, Along the Border, Simplicity, Indians, Desert Folklore, Peg-Leg Smith's Gold, Lost Mines And Buried Treasure, Frontier Wild Women, Desert Rats & Hermits, Death Valley Scotty, etc. Besides these, Harry Oliver would also deal with such themes as: The Lost Ship of the Desert; his Desert County secession movement and Keep the Desert Beautiful campaign; outlaws and lawmen; communicating with animals; and what others had written about him.

The above descriptions do nothing to convey the ambiance and attraction of the Desert Rat Scrap Book. It's like holding a booklet that becomes an old-time news sheet, filled with information old and new, real and imaginary, serious and hilarious, all informed by a strong and cantankerous personality. There's always another detail in another corner, another timeless tidbit waiting for a patient reader to stumble upon. Even when new, each issue is a small time machine.

Just as Harry Oliver's design of Gold Gulch, at the San Diego World's Fair (California Pacific International Exposition) of 1935-36, strongly influenced the development of Western theme parks and frontier village reconstructions, so his DRSB can be seen to help shape subsequent Western Americana literary ephemera. The DRSB can also be seen as an ancestor of zine culture

Dating any specific issue has always been problematic. Postmarks on mailed issues are not always helpful. Harry Oliver produced all issues ('packets') of the first 11 pouches, often at very irregular intervals. Later issues depended heavily on reprinted items. Due to failing health and attitude, Oliver ceased publication in 1965. In 1967 he gave his operation to ex-merchant seaman Bill Powers, who produced two more issues (Packets One and Two of Pouch Twelve) and reprinted a few old issues, then abandoned the DRSB forever and disappeared, possibly returning to sea.

NOTE:   Following is a necessarily incomplete summary of DRSB 'articles'. This list may merely give a taste of the fractally-complex contents of each issue. Unless credited otherwise, text and art are presumably by Harry Oliver.