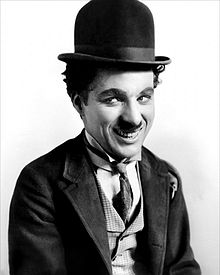 Charlie Chaplin in his "Tramp" persona

Charlie Chaplin was a British film actor, comedian, director, producer, writer, musician and music composer whose work in motion pictures spanned from 1914 until 1967. During his early years in film he became established as a worldwide cinematic idol renowned for his tramp persona. During the 1910s and 1920s he was considered the most famous person on the planet. [1]

Chaplin was born in London and began acting on stage at the age of nine.[2] In 1913, while on tour in the United States with Fred Karno's comedy group, he accepted a contract to work for Mack Sennett's Keystone film company. During his time at Keystone he began writing and directing some of the films in which he starred. Chaplin signed with the Essanay Film Manufacturing Company in 1915 and the year after with the Mutual Film Corporation. In 1918 Chaplin began producing his own films, initially releasing them through First National and then through United Artists, a corporation he co-founded with Mary Pickford, Douglas Fairbanks, and D. W. Griffith.[3] In the late 1940s and early 1950s Chaplin was accused of being a Communist sympathizer, which he denied.[4] He remained a British subject and, while travelling to England in 1952 to attend the premiere of his film, Limelight, his American re-entry permit was rescinded.[5] Chaplin eventually settled in Switzerland, where he remained for the rest of his life. He made his last two films in England.

During his lifetime Chaplin received three awards from the Academy of Motion Picture Arts and Sciences. At the first Academy Awards ceremony, held on May 16, 1929, he won an honorary award for writing, directing, producing, and acting in The Circus (1928).[6][7] In 1972 he returned to the United States after nearly two decades to receive another honorary award, this time for his overall achievements in cinema. The following year Chaplin's score for Limelight received the Academy Award for Best Music. Although 20 years old by this time, Limelight had not been released in the Los Angeles area until 1972, and had not been eligible for Academy Award consideration before then.[7] Chaplin also received Academy Award nominations in 1940 for Best Actor and Best Original Screenplay for The Great Dictator and in 1947 for his screenplay of Monsieur Verdoux.[7]

In 1965 Chaplin established his official filmography with the publication of his book, My Autobiography. The filmography consisted of 80 motion pictures released since 1914. Further detail was added to it in David Robinson's 1985 biography, Chaplin: His Life and Art, which included Chaplin's last film, A Countess from Hong Kong (1967), as the 81st entry. In 2010, an 82nd film was added with the discovery of A Thief Catcher, an early Keystone film hitherto thought lost.[10]

All of Chaplin's films up to and including The Circus (1928) were silent, although many were re-issued with soundtracks. City Lights (1931) and Modern Times (1936) were essentially silent films, although they were made with soundtracks consisting of music and sound effects, with talking sequences in the latter film. Chaplin's last five films were all talking pictures. Aside from A Countess From Hong Kong, all of Chaplin's films were photographed in 35mm black and white.

Except where otherwise referenced, the release dates, character names, and annotations presented here are derived from Chaplin's autobiography, Robinson's book, and The Films of Charlie Chaplin (1965) by Gerald D. McDonald, Michael Conway, and Mark Ricci.

Chaplin appeared in 36 films for Keystone Studios, all produced by Mack Sennett. Except where noted all films were one reel in length.

Chaplin wrote, directed, and starred in 15 films for the Essanay Film Manufacturing Company, all produced by Jesse T. Robbins. Except where noted all films are two-reelers.

Chaplin wrote, produced, directed, and starred in 12 films for the Mutual Film Corporation, which formed Lone Star Studios solely for Chaplin's films. All of the Mutual releases are two reels in length.

Chaplin wrote, produced, directed, and starred in nine films for his own production company between 1918 and 1923. These films were distributed by First National.

Chaplin began releasing his films through United Artists in 1923. From this point on all of his films were of feature length. He produced, directed, and wrote these eight films and starred in all but the first. Beginning with City Lights Chaplin wrote the musical scores for his films as well.

In 1952, while travelling to England to attend the première of his film, Limelight, Chaplin learned that his American re-entry permit was rescinded. As a result his last two films were made in England.

In addition to his official 82 films, Chaplin has several unfinished productions in his body of work. He made several cameo appearances as himself and was featured in several compilation films.

Essanay produced three compilations without Chaplin's authority (to which he took legal action). Chaplin produced his own compilation in 1959 and was involved in the making of another in 1975.

In addition to his own productions of A Woman of Paris (1923) and A Countess From Hong Kong (1967), Chaplin made cameo appearances as himself in the following films:

Chaplin "appeared" as himself in the following animated cartoon shorts:

Chaplin's life has been dramatized in the following films: